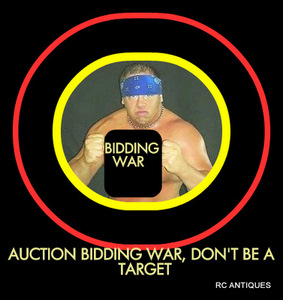 I love estate auctions. Spring till fall, the best deal auctions are on site.
My previous blog, listed on my blog page,  http://rcantiques-rcstreasurehuntsmore.blogspot.com/ , gives tips for the on site auctions.
This blog is part 2.
The bidding war.
A bidding war can be found on all auctions, be they on line, or at an in person auction.
I can remember an on site auction I attended many years ago.
It was in a small town a few miles from where I live.
The people lived there since their marriage, which would amount to items
accumulating  in the house since around 1930.
Rows up on rows of box lots loaded with things you seldom see these days.
Tables full of glassware, which in those days, was a very hot item.
The auctioneer had supplied flat tabletop showcases to protect choice smalls. Oh my, the things in those showcases, you just do not see things like that these days.
And the linens and quilts...wow, wonderful, and they brought very high prices.
But, on to the point of this blog.
The bidding war.
I was in the crowd watching as they held up one wonderful quilt after another.
One particular quilt was held up, the bidding began, and continued to rise at a steady pace.
It was a nice quilt, but, not rare, so, I looked to see who wanted this quilt so badly to bid so high.
The lady was leaning against a tree in a casual pose, holding her bidding number high in the air, and I do mean high, her arm was held up as though in a school room wanting to be picked to give an answer to a question.
She stood there with a determined look on her face. That look, and that pose, created a bidding war.
It alerted everyone, all minds were set on outbidding that determined lady. People jumped in on the bid that had no intention of bidding on that quilt in the first place, but, because of that lady's " this is mine " stance, the war was fierce. She got her quilt, but she paid too much as far as the true value.
The back bidder was a little fellow I will always remember, his name was Charlie, a short little fellow with a Dutch accent.
Charlie was known to jump in on bidders such as that lady, as though it was his hobby.
When the bidding was over, he walked up to the lady who was a complete stranger to him , and proclaimed to her, " you paid too much ", and with that, would strut proudly away.
Charlie was a very knowledgeable antique dealer, but, he enjoyed bidding wars, and had the knack of knowing who to pick as a competitor, and knew when to stop, so he could do his strut, and proclamation, " you paid too much ".
Valuable lesson learned. When bidding, be discreet. If the item you are bidding on is popular and the bidding becomes insistent, remember your original price you were willing to pay for the item. Do not get caught up in the competitive excitment of the bidding.
Easier said then done.
I do not go to auctions much anymore, however, when I do, I remind myself while bidding, how much would I pay for this item if I saw it in a shop. That has helped me avoid the bidding war.
I will also confess, there have been times I have paid more than the value of the item, but, if the item is for my collection, my enjoyment, and an item not easily found, yes, paying the extra cost has always been worth it.
The bidding war, arm yourself wisely.
And remember, book price is the bids totals reported nationwide averaged that year of auctions and in shops...and many times , that book price is due to a bidding war.
As proof of this statement, a good many years ago, an antique Uncle Sam dressed as Santa Claus postcard brought , ( if I remember correctly ) over $ 6,000. The picture of the postcard was on the back cover of Mash's postcard reference book that year. And, the amount was due to a bidding war.
Although a very rare card indeed, it would take another auction with at least 2 high end postcard collectors at war for the card to generate that price again.
This blog is dedicated to ole Charlie.
It is thanks to watching Charlie long ago, proclaiming to his numerous victims through the years, " you paid too much ", that I learned how to avoid the bidding war.