JERUSALEM — As millions of Israelis paused in reflection on Monday at the sound of the siren marking Holocaust Remembrance Day, the Internet here was buzzing. The first online database of more than half a million pieces of property lost by Holocaust victims, many in Eastern Europe, had just been uploaded as a first step toward restitution. 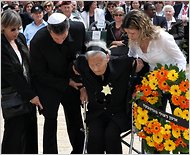 A Holocaust survivor at a ceremony of remembrance on Monday at the Yad Vashem Holocaust memorial in Jerusalem.

After years of quiet diplomacy that accomplished little, organizers of the new project, financed by the Israeli government, said the idea was to harness technology in the struggle for restitution and to make as much noise as possible.

“This is an activist approach,” said Bobby Brown, executive director of the Holocaust Era Asset Restitution Taskforce, known by its acronym, Project Heart. “We believe there are no secrets anymore about the Holocaust.”

Pointing to the success of public drives in the past, like the campaign for Soviet Jewry and the settlement of claims of Holocaust victims by Swiss banks, Mr. Brown said the issue of property restitution had to be out there on Twitter and Facebook, although negotiations with countries where properties were located “do not have to be made public right away.”

The project, a nonprofit global campaign of the Jewish Agency for Israel, a quasi-governmental body, has set up offices in Milwaukee and Brussels. It was announced at a news conference in Jerusalem on Sunday, and another news conference is planned for Wednesday in New York City. In line with the open approach, donors are paying for advertisements for Project Heart over the next six weeks in Times Square.

his is the first worldwide list of property confiscated, looted or forcibly sold during the Holocaust era to be made available to survivors and their heirs. Compiled from hundreds of European archives, including tax records and voter registries, it includes real estate and land, movable property like art and jewelry, and intangible personal property like stocks, bonds and savings accounts.


The project has already invited potential claimants to submit their details to the Web site, which is in 13 languages. Many of the properties in the database are listed with the names of the original owners, and sometimes their professions, information culled from the public records to help potential claimants find a match. Some 650,000 pieces of property were uploaded this week, and Mr. Brown hopes that the list will grow to a million by the end of the year. About 3.3 million Jews lived in Poland alone, he noted.

Other Jewish organizations have dealt with restitution for decades. The Conference on Jewish Material Claims Against Germany has focused on Germany and Austria. The World Jewish Restitution Organization was established in 1993 to focus on Eastern Europe after the collapse of the Communist governments. There has been some progress in the issue of community-owned property, but none on personal property, according to Mr. Brown.