INTRODUCTION TO THE WINDSOR CHAIR By Fred Taylor "The Furniture Detective"

INTRODUCTION TO THE WINDSOR CHAIR By Fred Taylor 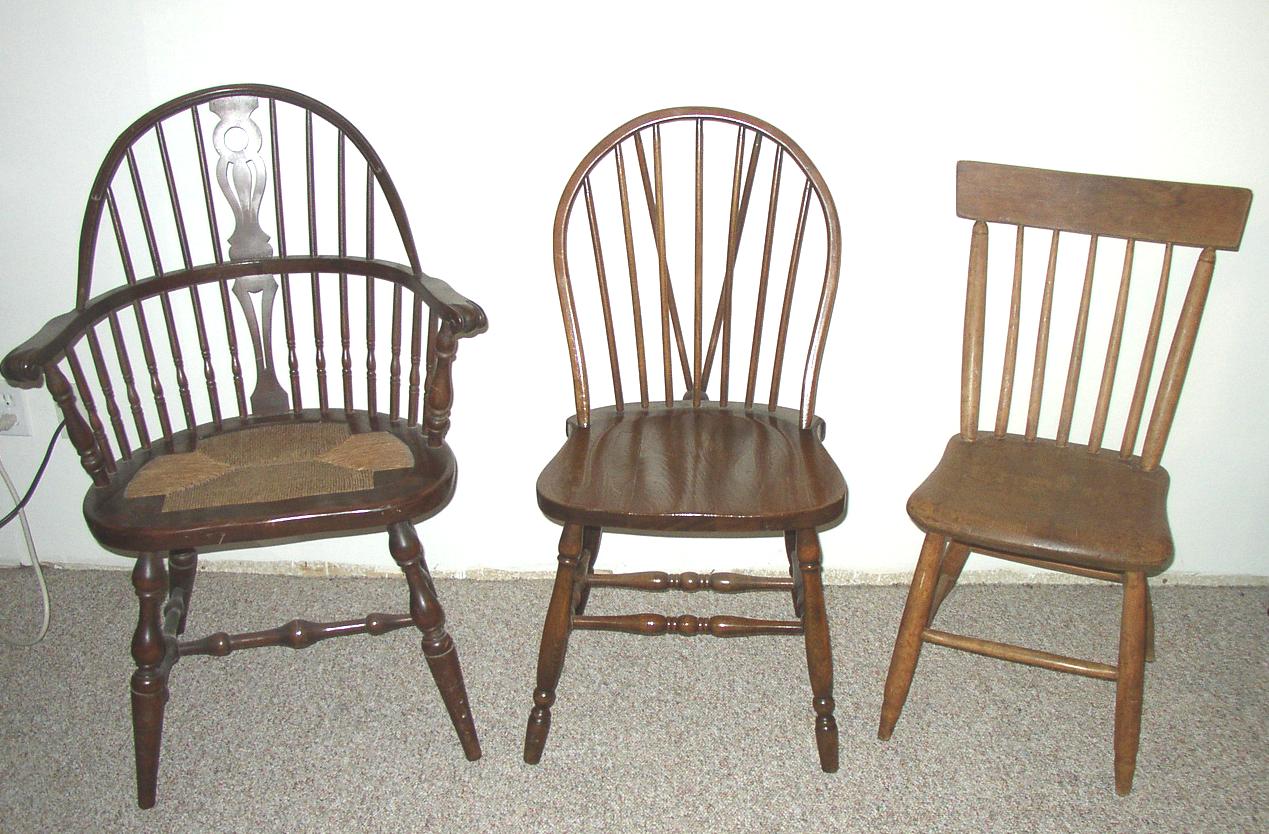 One type of chair that everyone is familiar with is the ever present Windsor chair. But why are there so many of them and what is the basis for America's love affair with that type chair?

The word "Windsor" is usually capitalized in deference to the supposed point of origin of this style chair, the area around the town of Windsor, England, in the early 18th century. However, many furniture repair people, who have struggled with legs and spindles jutting out at odd angles as they try to repair the chair, are less generous and do not accord it the honor of capitalization.

A Windsor chair is one in which all the legs terminate in the seat. In addition all upper members of the chair - stiles, spindles and hoops also terminate either in the seat or into each other and no single part of the entire chair is continuous from the top of the chair to ground level. In other words, it is a platform supported by legs. The platform in turn supports the upper structure.

The early appeal of the Windsor was its elementary construction. It is said that 18th century English peasants made the chairs with nothing more than a pocket knife, whittling out legs and spindles from green limbs and implanting them in a thick plank for the seat. It's actually a little more difficult than that but it makes a good story. The "stick' chair quickly made its way to the Colonies in the 1730s where Windsor construction was initially centered around Philadelphia. And almost immediately the chairs, like the Colonists who made them, took on American forms that differentiated them from their English origins. The very earliest American Windsors had laboriously carved and turned cylinder and ball legs, similar to other chairs of the first half of the 18th century. But demand for the chairs and the necessity of easier production finally prevailed over tradition around mid century and the legs of the American Windsor became tapered with ring turnings, faux bamboo turns and simpler stretchers.

Soon the chairs were exported throughout the Colonies and local variations abounded as craftsmen set to work providing a local supply of the simply made chairs. The design of the chair was such that almost any local material was adequate. The seat commonly consisted of a single thick plank of soft wood such as pine. It was often "scooped" and shaped for added comfort. Some early models also had rush seats. The legs and spindles were made of a hard wood such as ash, oak, birch or maple that could be steam heated and bent to form the popular hoop back seen on many models. The key to the construction was that all the wood used was uncured green stock. Then as the wood dried and shrank it became secured in place by the grip of the shrinkage. The grain of the plank seat in 18th and early 19th century Windsors invariably ran from side to side rather from front to back as is seen in modern chairs.

While local variations of the Windsor continued, by the 1820s most production of the chairs had settled into a factory environment and several basic forms became the norm. But as you might expect with such a widely manufactured and distributed product, the same form was often called by different names in different locations. Here are the most common forms and their names.

Low Back - The low back Windsor has a semi-circular horizontal crest rail above relatively short spindles. The crest rail also serves as the armrest. This style is generally called a "captain's" chair and is the model most frequently seen with a writing surface attached to one arm.

Hoop-back - There are three common versions of the hoop back. One is a variation of the lowback with a hoop added above the crest rail. The hoop terminates in the crest rail somewhere short of the armrest portion. This is also called a "sack-back". Another type hoop chair has a continuos hoop that rises above tall spindles and terminates on each side of the seat. This is also called a "bow-back" or "loop back". Yet another version has the hoop supported on the ends by vertical spindles to form the armrests on each side before the hoop rises high in the back. This is called a "continuous" armchair.

Fan-back - The fan back is a side chair, typically with two stiles, heavier than the other spindles, rising vertically on each side of the seat. The gently curved, almost straight, horizontal crest rail sits atop these stiles and is also supported by smaller spindles.

Rod-back/arrow back - These are variations of the fan back chair. The rod back features fairly straight stiles and spindles that sometimes intersects a lower crest rail. Then a secondary set of spindles above the lower crest, along with the stiles, supports a top crest rail. The spindles are often swell turned or faux bamboo turned. But not all rod backs have the second crest rail. The arrow back chair has slightly backward leaning stiles and flattened spindles that may come close to a point at either the top or bottom.

Almost any of these variations may have additional support in the form of spindles rising from a rear extension of the seat or from a ball extended from the seat edge. These chairs have the name "brace" added to any other name.

A couple of key differences between 19th century chairs and 20th century Colonial Revival models make identification easy. Newer factory made Windsors tend to have all components made of the same wood, a hardwood. And the seats in modern chairs are usually made of two or more pieces of wood glued together to form the seat surface and the grain of the wood runs from front to back, not side to side like the wood in early Windsors.

Send your comments, questions and pictures to me at P0 Box 215, Crystal River, FL 34423 or info@furnituredetective.com