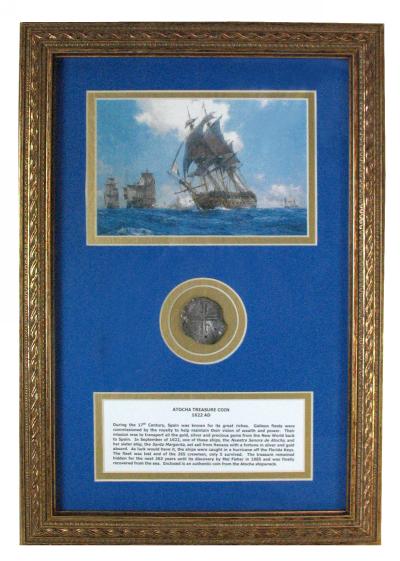 Spain has gone to great lengths to preserve her written history. The Archive of the Indies, in Seville, is one of its most important repositories. Forty thousand bundles of preserved and guarded documents- 50 million pages- reveal the history of Spain’s expansion into the Americas and 400 years of Colonial rule there, as well as the fate of a single ship, the Atocha.

As Spain extended its empire halfway around the world to the South Pacific, it became more and more dependent on taxes on goods from central and South America to defend its claims.  The colonies depended heavily on goods produced in Spain, while at the same time sending back valuable agricultural goods, gold, silver and high quality gems. Approximately six to eight billion dollars of gold and silver were mined in Spain’s American Colonies. This wealth raised Spain to world power status from the early 1500’s until 1800.

By 1621 Spain’s empire controlled vast territories of four continents. The nobility made up only a small fraction of the population, but enjoyed virtually all the civil and military offices at home and abroad. While the aristocracy was exempt from taxation, the peasantry of Castile was forced to withstand the worst of the tax burden. While the Royal Court of Madrid shone with finery, the cities of Spain filled with unemployed vagabonds. The country’s lopsided social structure ensured that the wealth of the Indies never trickled very far down. Much of the New World bullion went directly into foreign hands in return for the luxuries dear to the nobility. The Spanish Crown was Bankrupt.

In order to keep the empire afloat, Spain levied a 20% tax (the quinto) on proceeds of this trade. Since 1503, a clerk, or escribano, was required on board each ship to keep an official list of cargo loaded and unloaded on the long voyages. This manifest served as the basis for collecting the quinto. Also, an additional tax (the averia), which was sometimes as high as 40%, was used to pay the cost of defending the merchant vessels from the Dutch, English and French.

Spain required all merchant ships to sail in convoys, protected by Spanish war ships called galleons. Square sails and a high stern castle (up to 35 feet above the water line) capped with a high poop deck, gave the Spanish Galleons a unique, and easily recognized profile. In addition, while they were slower than the brigantines and sloops used by their enemies, they were very heavily armed, carrying huge bronze cannons. In addition to the galleons, two strong galleons, a capitana, which led the group, and an almiranta, which brought up the rear, provided extra protection against the enemies of Spain. These convoys left Spain in early spring and split up to different Caribbean ports to pickup their consignments of royal treasure.

The Tierra Firme fleet would sail to Portobello and Cartagena to load gold and silver from Peru, Ecuador, Venezuela and Columbia then proceed to Havana for copper. Ships would also pick up indigo dye at Trujillo. The fleet would meet back in Havana with their cargoes in July. The larger and more heavily armed galleons would carry gold and silver, while the smaller merchant ships carried agricultural products.  By 1622, the Thirty Years War was reaching crucial stages, and the Dutch had joined with the French in attacking Spanish vessels. The cost of this fighting seriously overextended the Royal Treasury. The Crown began borrowing so heavily those foreign moneylenders held effective first mortgages on all the Kings income. Banking firms such as Fuggers of Augsburg kept representatives in Seville to claim first rights on the incoming silver from Mexico and Peru.

The 1622 Tierra Firme fleet, including the Nuestra Senora de Atocha arrived at Portobello on the Isthmus of Panama on May 24. Seven Guard Galleons, including the Santa Margarita, reached the island of Dominica on May 31. From there sixteen smaller vessels picked up cargoes around the Caribbean while the Guard Galleons went on to Cartagena, Columbia to unload their cargoes. They picked up gold and silver and then met the Tierra Firme fleet at Portobello on July 21.

The ships left Portobello and arrived back in Cartagena on July 27. They loaded more cargo and proceeded to Cuba, arriving on August 22, to rejoin with the New Spain Fleet, which had arrived earlier with its Mexican Cargo.  The close proximity of a large Dutch fleet caused the commander of the New Spain Fleet to request permission to immediately leave for Spain. The Marquis of Cardereita gave that permission on the condition that the bulk of the bullion and coins be left in Havana, to be shipped later under the protection of the Guard Fleet. Therefore, the Marquis split his fleet into two parts. He sailed in the lead ship (capitana) of the Guard Fleet, the Nuestra Senora de Candeleria. The bulk of the treasure was split between the Santa Margarita and the Nuestra Senora de Atocha. The Atocha had been outfitted with 20 bronze canons, and was to be the almiranta, sailing last to protect the slower merchant ships. Therefore, 28 ships, the Tierra Firme and Guard Ships left Havana on Sept. 4, six weeks behind schedule.

On Sept. 5 the weather turned bad, and then worse, with the approach of a fast moving hurricane. The ships were separated as clouds and rain darkened sky. The ships rolled violently. The seasick passengers and crew of the Atocha watched in horror as the smaller Nuestra Senora de Consolacion capsized and disappeared.  That night the wind shifted and pushed the fleet north toward Florida. Before dawn, the Candeleria and 20 other vessels passed to the west of the Dry Tortugas. They were able to ride out the storm in the deep waters of the Gulf of Mexico. At least four ships, including the Atocha and the Santa Margarita, were pushed into the Florida Keys. Near a low-lying atoll fringed with mangroves, the 15-foot rollers carried the Margarita across, grounding her in the shallows beyond. Her commander, Captain Bernardino de Lugo, watched the Atocha to the East.

The crew of the Atocha desperately dropped anchors into the reef, hoping to keep the ship out of the coral and certain destruction. Suddenly a wave lifted the Atocha and threw it onto the reef. The main mast snapped as the huge seas washed the Atocha off the reef and beyond. Water quickly filled the ship through a large hole in the bow. The Nuestra Senora de Atocha went to the bottom leaving only the stump of the mizzenmast visible. Of the 265 people on board, only three crewmembers and two black slaves clung to the mast until the Santa Cruz rescued them the next morning.

The lost ships of the 1622 treasure fleet lay scattered over 50 miles from the Dry Tortugas eastward to where the Atocha went down. Over 500 people died and a cargo worth more than two million pesos lost.  Twenty of the twenty-eight ships returned to Havana while an attempt was made to salvage the Atocha and Margarita. Gaspar de Vargas was sent with five ships for the salvage operation. The Atocha was quickly found, her mizzenmast still rising out of the water. The Atocha was down 55 feet, making it very difficult for divers to work. They found all of the hatched and gun ports securely fastened. Only two small iron swivel canons from off the deck could be salvaged.

Vargas proceeded west in search of the Margarita, which he could not find. At Loggerhead Key, he found the Rosario and a small group of survivors. Vargas burned the Rosario to the water lone to expose the cargo for salvage. In early October, a second hurricane swept through the area, interrupting the salvage effort and forcing Vargas to seek higher ground. After finishing with the Rosario, Vargas returned to Havana for more tools to make another attempt on the Atocha.

When they returned to the place they had last seen the Atocha, the almiranta could not be seen. Apparently, the October hurricane had buried her, and even dragging the bottom with grappling hooks came up empty.  In February, the Marquis personally joined the salvage effort, and a few silver ingots were found, but the ships hull still eluded them. By August, the efforts were abandoned and Vargas returned to Spain. Nicholas de Cardona drew a map of the search area for their salvage report before he left for Havana.  The loss of the 1622 treasure fleet was a disaster for the Royal Treasury. The Crown was forced to borrow even more to finance the Thirty Years War. Several of the Guard Galleons were sold to make up some of the loss, but it was not nearly enough. The treasure of the Margarita and the Atocha had to be found!

In 1624, Nunez Melian was granted a contract to salvage the Margarita and the Atocha. Over the next two years, he had a 680-lb. Copper diving bell cast. Finally reaching the salvage site in June of 1626 the use of the bell proved successful. Juan Banon, a slave, spotted wreckage and managed to bring up an ingot. The Santa Margarita was found!  Over the next four years, interrupted frequently by weather and Dutch raiding parties, Melian managed to recover 380 silver ingots, 67,000 silver coins and 8 bronze canons. The Atocha still could not be found.

Melian was eventually appointed Governor of Venezuela, and he hired Captain Juan de Anuez to continue the salvage efforts, which he worked sporadically until 1641. That year Melian applied for another salvage contract upon hearing rumors that the Indians of the Keys knew the location of the Atocha. Melian died in 1644, before anything could be found. His salvage accounts were collected in Havana and eventually forwarded to the Archives of the Indies in Seville, Spain.

Spain’s power declined during the rest of the 17th century, as the Dutch, English and French attacked her in Europe and overseas, taking control of many of her Caribbean colonies.  In 1715 and 1733, entire fleets were lost off the Florida coast, and the Spanish tried to salvage what they could from these wrecks, too, in spite of harassment from the English based in Virginia and the Carolinas. In 1817, the United States bought Florida, ending Spain’s influence, and leaving the lost treasure fleets, including the Atocha, to be forgotten.

Atocha shipwreck coins are available at Sadigh Gallery Ancient Art., and at the gallery's website at www.sadighgallery.com.