In the early 1930’s a timid young sign painter and would-be commercial artist in New York City became enamored with all types of sports figures who were popular during this period. After a day’s work and on weekends, he would retire to his room in his parent’s home and go to work at his drawing board. He would render the players’ action poses in charcoal and pen & ink and then label the drawings by hand with the player’s position and team name. Living in New York was the perfect opportunity for the young man to eventually come in contact with his heroes. When a team would come to town he would take his drawing to the game and seek out the subject, sometimes in the dugout, at other times in the locker room. His goal was to acquire the signature, but more importantly, he wanted to meet the player and perhaps, just perhaps, have a short chat with him about the ‘game’, whether it be baseball or boxing. Many times he would take his artwork to a game or match simply to go home with nothing. But over the space of two years, he was able to successfully connect with a hundred or so of his idols. 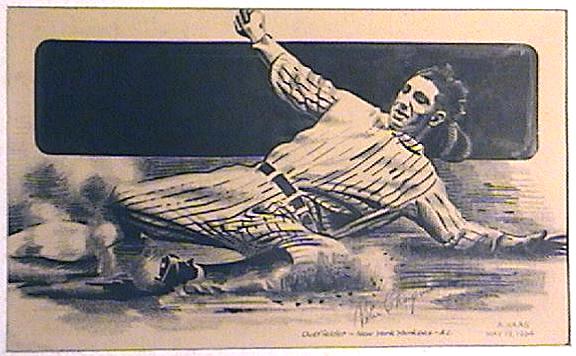 This shy young artist was my father, Arthur Haas. As a child growing up in Miami, Fla., it was thrilling to hear the stories he would tell about his successes meeting his favorite players, but it was also fascinating to hear about the times when he struck out. Just once, in 1935, he trusted a friend to take a drawing to a locker room in order to have it signed by Joe Louis. “I’m going that way anyway” his friend said. “Let me take it for you.” This drawing was unique because it was the first (and only) one my dad had done in color. He never saw the drawing again. Another story involved a hockey team. Arthur had done several drawings of team individuals from the Chicago Blackhawks. He was standing outside the locker room when a player came out to look at what he had brought. The man was amazed. And why, for goodness sake, have each player come to the door to see their image? My dad was invited into the inner sanctum of the locker room. About 45 minutes later, he left. The guys had all marveled at Arthur's artistic ability and then invited him to stay awhile to shoot the breeze.

One of the drawings is of Honus Wagner when he was the coach of the NY Yankees. My father was in the stands, just beside the dugout, asking for Wagner. Instead, a player offered to pass the drawing to his coach. Wagner autographed it with a black ink pen, then noticed he had signed in the wrong place, and partly on top of his black jacket. (My dad would leave a white space or make a ‘box’ for the player’s signature.) And so the old man did the right thing – he signed it again! My father passed away in 1999 at the age of eighty-seven. Yes, he did eventually become a commercial artist, working as a sign designer for the Electro Neon Sign Company in Miami for thirty years. His sports drawings were willed to his daughters. Now 24 of them are being offered for sale at Hourglass Antiques & Collectibles at TIAS. We have been a part of the TIAS family for 10 years. We've been antiques dealers for 19 years altogether. As always, any purchase may be returned (in it’s original condition) for any reason for a full refund.

And now a few words about the drawings themselves. Having been done in the 1930’s, most of them have an Art Deco feel. They were done on heavyweight drawing paper, and may have been sprayed with a fixative. They are signed and dated by my father. Some of the sports figures available in this offering are: Howie Morenz, Chuck Klein, Honus Wagner, Mel Ott, ‘Gabby’ Hartnett, Jack Dempsey, Jimmie Foxx, Sam Rice, Lorne Chabot, Pie Traynor, Waite Hoyt, Bill Dickey and Freddie Spencer.

Unlike sports cards or photographs, these are unique and one-of-a-kind! Even so, we are pricing the drawings as if they were autographed 8 x 10 photos, since my father was an unknown artist. All have been hand-signed by the subject within 12 to 18 months of their completion.

The autographs have not and will not be ‘certified’. This would require my sending them away so they can be looked over with a loupe, only to be told what I already know – that they are authentic. Any buyer will have two weeks to have the autograph certified if they desire it. And as always, your purchase may be returned for any reason for a full refund. The drawings will be shipped flat by Priority Mail, UPS, or FedEx. Insurance will be required.