A cure for the arts and crafts blues 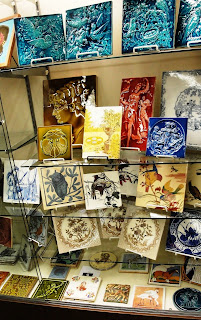 I can't say I was feeling blue on a recent antiquing adventure at the Boston Antiques and Design Show and Sale, but one look at three remarkable blue and white delft tiles quickly changed that!

Before I share the story of these delightful delfts and what makes them so special, let's take a brief look at the history of ceramic tiles. Functional and decorative tiles have been around since around 4000 BC; the oldest known tiles were discovered in Egypt. Over the centuries, they were used extensively to decorate places of religious worship and later the homes and businesses of affluent individuals. Fast forward to 1584; expert potters from the Dutch city of Delft begin creating the area's now iconic blue and white ceramics that are now known all over the world. The designs behind these blue and white classics were in part based onimported Chinese porcelain of the 17th century. The city of Delft was a homeport of the Dutch East India Company, so these early potters clearly had a world of inspiration right in their own backyards. (This picture here on the left shows a delightful variety of colorful American and European tiles from the mid 1600's through the 1930's.) 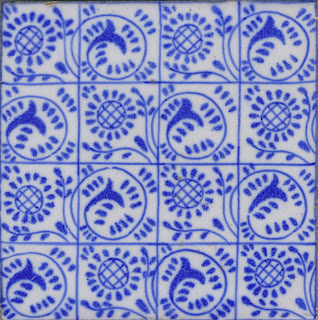 Having a personal passion for all things from the arts and crafts movement (1870 - 1920), I was intrigued to learn that these tiles were not only from that amazing design period, but were actually designed by William Morris himself! William Morris was the founder of the arts and crafts era, a design and philosophical movement which started as a backlash to the industrial mechanized production of goods which separated craftsman from craft. Morris and his colleagues advocated for a return to all things simple and handmade to make life more authentic. This movement started in England and quickly spread throughout Europe and then to the United States. (This picture is a close up of the single William Morris blue and white hand painted delft tile I found on my adventure.) 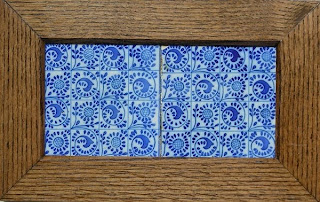 These remarkable tiles, perfect examples of the artisan work of the arts and crafts movement, were created in 1870 in Morris' own "scroll" pattern. They were manufactured by hand for him by three different Dutch factories. They are tin glazed, meaning they are finished with a glaze made by adding tin to a lead glaze, which when fired becomes an opaque white. These tiles were originally designed to decorate Morris' own "arts and crafts" style home in Bexleyheath, London, known as The Red House. In addition to tiles, Morris and his group of like minded artistic friends collaboratively produced arts and crafts style wallpaper, fabric, rugs, furniture, and other decorative objects. (This picture is of two William Morris blue and white hand painted delft tiles in a wooden frame that I found on my adventure.)

Although William Morris died in 1896, his influence on style, design, and architecture remains important more than 100 years after his passing.