A Bit About Biedermeier

The Biedermeier style was a simplified interpretation of the influential French Empire Style of Napoleon I, which introduced the romance of ancient Roman Empire styles, adapting these to modern early 19th century households. Stylistically, the furniture was simple and elegant. Its construction utilized the ideal of truth through material, something that later influenced the Bauhaus and Art Deco periods. 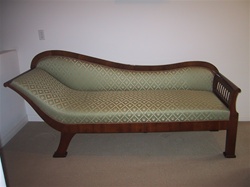 Here we have a a beautiful example of the Biedermeier style. An exceptional Biedermeier Walnut Recamier. Origin, Vienna Austria. Ca. 1830. This incredibly fine Recamier was purchased and refinished in Germany in 1998 from Manfred Ehrl, one of the most acclaimed antiquarians. Imported to the US in 2005. Museum Quality. No wood worm or damage on this superbly constructed Walnut Frame. Dimensions: 7 feet (220 cm) in length measured at the longest points; 27 inches (68 cm) deep, and 37 inches (94 cm) high at the point where the back curves. Back can be easily removed for more open look. Recently re-upholstered with high grade polished cotton/silk blend. Well cared for. No fabric problems of any kind. Can be purchased at http://www.aardvark-antiques.com/product-p/kt1.htm.