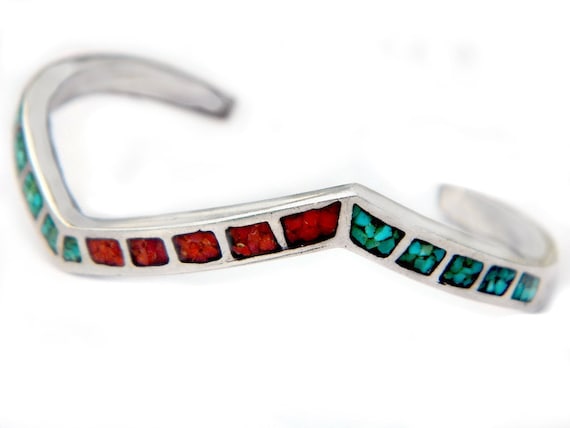 Navajo Jewelry making is the artistic expression of an indigenous culture in The America's with beginnings that have been found in the Oral and Traditional History of Native Americans for generations.

The simple beaded jewelry that many tribes created as adornment, an expression of wealth or position in a tribe, and traded for goods and services, have been found throughout ancient and traditional lands once occupied by Native Americans. Simple Shell or Bone Necklaces, strung on sinew, thousands of years old, testify to a culture that has created beauty for centuries. Adornment for ceremonial items, clothing, horses, and bodies has always been a natural and creative art for Native Americans. The creation of Beads, originally from simple Bone or Shell, rough and natural, advanced to the shaping of Stones into Heishi Beads. Hand ground Turquoise, Coral, and Shell were fashioned into tiny discs, known as Heishi, and made into Jewelry Necklaces, Bracelets, and other adornment. 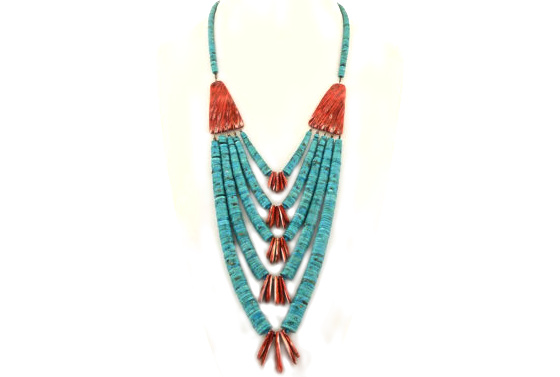 The Native American Peoples of The Santo Domingo Pueblo in New Mexico have a distinguished history of Heishi Bead Jewelry making. The Santo Domingos cling strongly to traditional beliefs, following the creation of Beads established by the Anasazi. Revered and Admired for their skill in Creating Traditional Beaded Jewelry, Authentic Santo Domingo pieces are highly coveted and sought after. Today, many artisans at Santo Domingo are renowned for their Heishi and Turquoise Jewelry, and they continue to sell these wares at tourist locations.

Silver Mining & The Influence Of Mexico 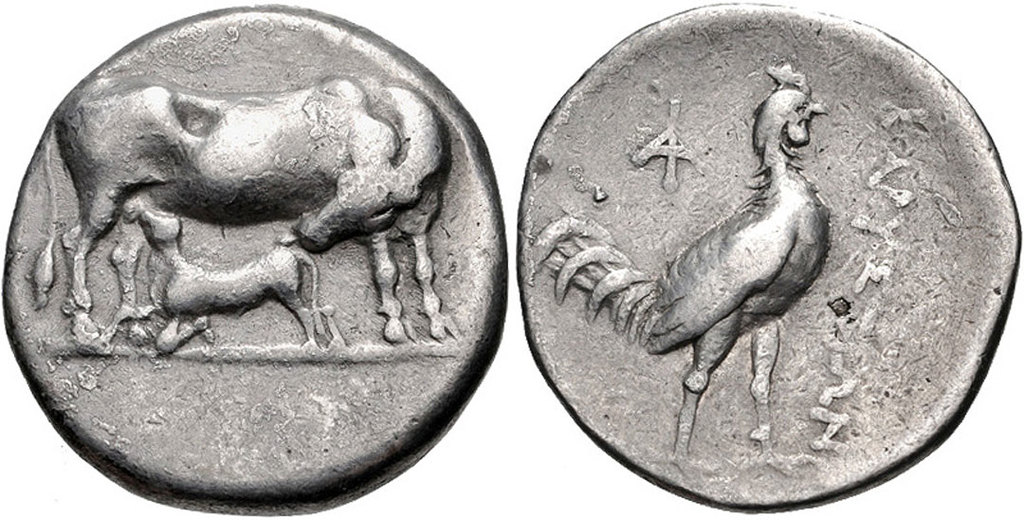 Fast forwarding through the History of Silver Mining, we come to the pivotal event of The Spanish conquest of The New World. It led to the mining of Silver that eclipsed anything that had come before that time. Between 1500 and 1800, Bolivia, Peru, and Mexico accounted for more than 85 percent of World Silver Production and Trade. 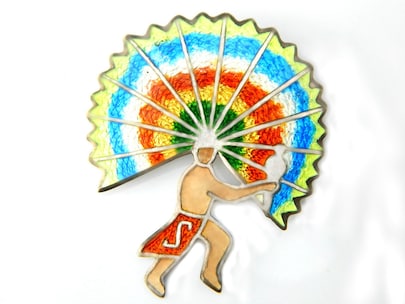 JF Jeronimo Fuentes Sterling Silver and Enamel Masterpiece in vibrant colors. A Dancing Warrior with a Rainbow Headdress created by Jeronimo Fuentes, Marked Eagle 1. This Rainbow Warrior is a Beautiful example of Taxco Silver and Enamel artistry inspired by Margot de Taxco and executed by one of her finest silversmith's. The 'JF' signature is often confused with artist Jose Frederico. Documented in The Little Book Of Mexican Silver Trade and Hallmarks by Bille Hougart, the Eagle 1 Mark was used by Jeronimo Fuentes who joined Margot de Taxco's silver shop, and followed as one of her successors. Jose Frederico used the Eagle 3 Mark, and the Eagle 1 Mark was used by Fuentes on early Margot pieces. After her shop closed, Margot allowed a few of her former silversmith's to use selected molds of her designs. 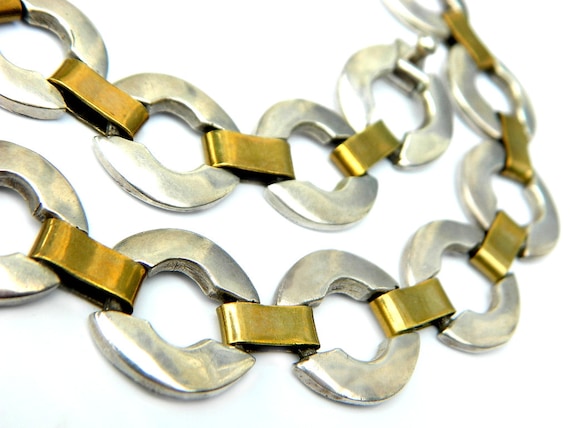 Taxco was founded as a colonial city in 1529, with 3 Spanish Miners who in 1531 founded the first Spanish Mine on the North American Continent.

By the end of the 16th century, Silver from Taxco had spread from Spain all across Europe, and Taxco became world renowned for its wealth of Silver and Silversmiths. Taxco Mexico Silver Jewelry is considered to be The Finest In The World.

The First Generation Of Navajo Silversmiths 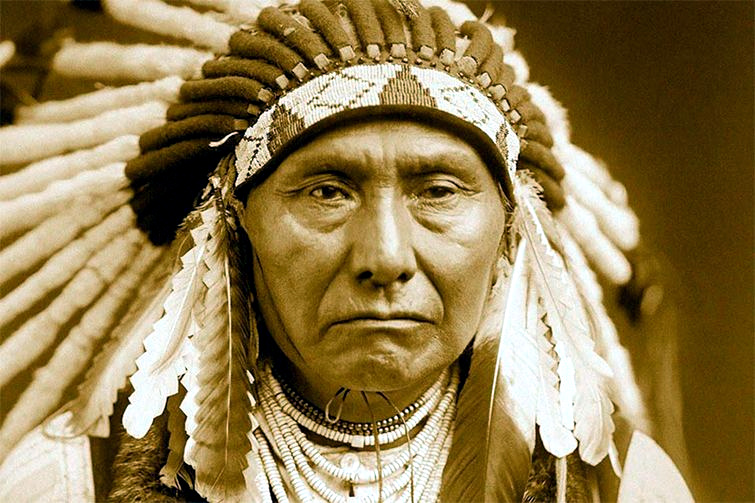 Believed to be the First Navajo Silversmith, Atsidi Sani learned his craft from the Mexican Silversmiths. In 1865, he was introduced to Silversmithing and The Art Of Najavo Silver Jewelry Making was born.

Little is known about Atsidi Sani. He was born near Wheatfields, Arizona, around 1830. To his people, he was known as Atsidi Sani, which translates to "Old Smith," and to the Mexicans he was known as Herrero, which means "Iron Worker." He was also a Medicine Man, Spiritual Leader, Ceremonial Singer, and a Navajo Chief. Some of his early Silver work consisted of Conchas, Bracelets, and a variety of other Jewelry pieces. Once Sani became skilled enough in working Silver, he passed on his knowledge of Silversmithing to his four sons, Big Black, Red Smith, Little Smith, and Burnt Whiskers.

Atsid Sani’s most important contribution was sharing his knowledge in his community. His first students were probably his four sons. He was, for a time, a paid teacher who taught many Navajos the Art of Silversmithing. One of his most successful students was his younger brother Slender Maker of Silver who used Silver and Stone to create several interesting Jewelry Artworks that advanced Navajo Silver Jewelry techniques.

Atsidi Sani lived a long life. Chee Dodge, a Navajo Tribal Leader, spoke of Sani, living near Washington Pass, which was not far from where he lived. According to Dodge, Sani died around 1918 and "must have been over 90 years old" at the time of his death. 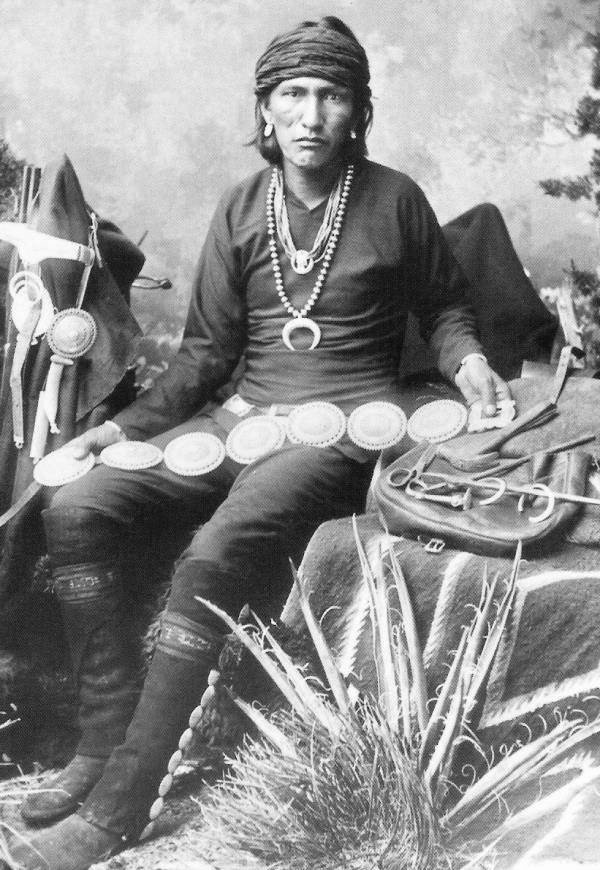 In the Early Years, the Navajos created simple Silver bells and buttons. These were worn as ornamentation, or traded among local Tribes for goods and services. To the left are Beautiful Examples of Antique Navajo Coin Silver Buttons. 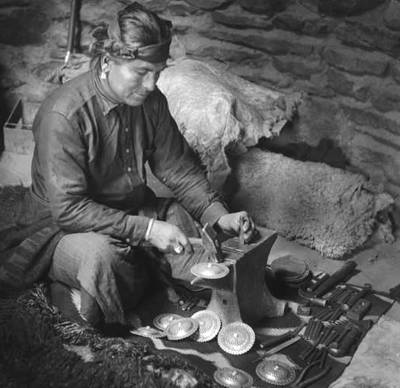 The early pieces of Navajo Jewelry were crude, heavy, flat and plain. The Silversmith's tools were primitive and few: awls, cold chisels, hammers and rough files. Silver was obtained by melting U.S. and Mexican coins into ingots, then pounding them into workable sheets.

Atsidi Chon, another early Silversmith, and Slender Maker Of Silver are both considered to be the first to set Turquoise in Silver around 1878. Grey Moustache, who was a student and the great-nephew of Sani, tells the Story in John Adair's Book ''The Navajo and Pueblo Silversmiths'. 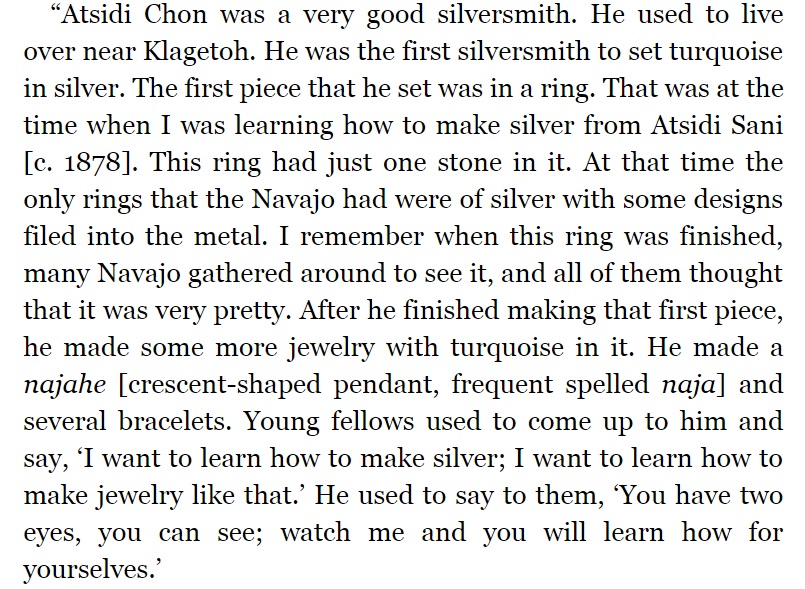 The arrival of the Transcontinental Railroad changed everything. With the Railroad came an influx of tourists, traders, The Fred Harvey Company, and better tools. Saws, shears, dividers, fine files and emery paper aided Silversmiths in creating more refined pieces. Decorative stamps were copied from Mexican leather workers and the previously plain, Silver bands were now stamped and punched.

The Railroad changed the influence and commerce of Navajo Jewelry. In the Early Years, Silver Jewelry was worn for personal adornment, traded with neighbors and pawn shop merchants, given as gifts for newborns, brides, and special occasions. The Railroad brought new opportunities for The Navajos, and those opportunities expanded under the influence of The Fred Harvey Company. 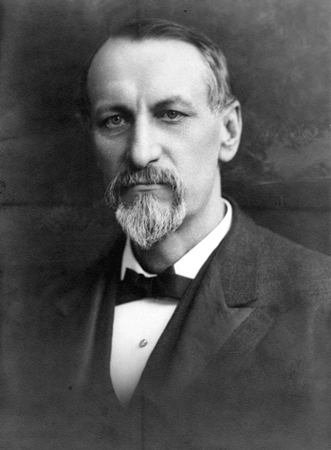 Fred Harvey (1835-1901) was a Trailblazer. As the owner of several restaurants and hotels alongside railroads, he became a leader in promoting tourism of the American Southwest in the late 19th Century.

In 1878, Fred Harvey signed a contract with the Santa Fe Railway (also known as the Atchison, Topeka & Santa Fe) to operate small restaurants at railroad depots along the railroad’s route.
The Fred Harvey Company became a marketplace for Southwestern Jewelry. Indian Arts and Crafts were sold to tourists and The Fred Harvey Era of Native American Jewelry began.
Fred Harvey died in 1901, but his legacy was preserved and carried on. 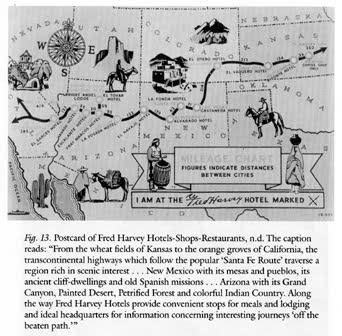 Minni Harvey, Fred Harvey’s daughter, and Herman Schweizer (L), a German immigrant, became one of the largest collectors of American Indian Art in the world. 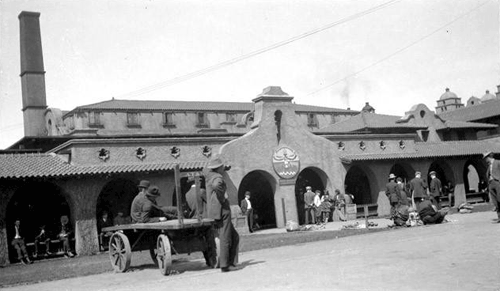 The Indian Building next to The Alvarado in Albuquerque,NM 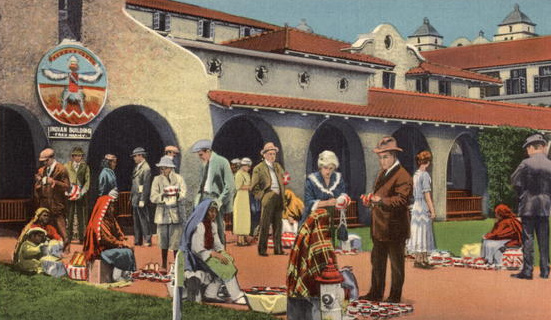 1927 Postcard of The Indian Building Exterior 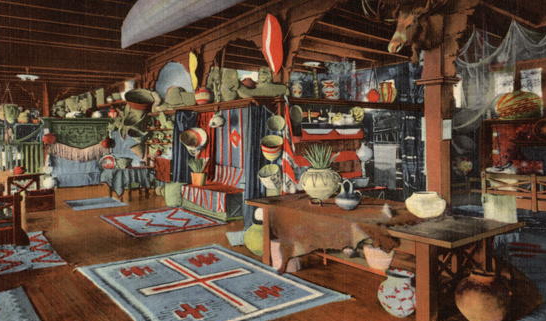 1930 Postcard Interior of The Indian Building 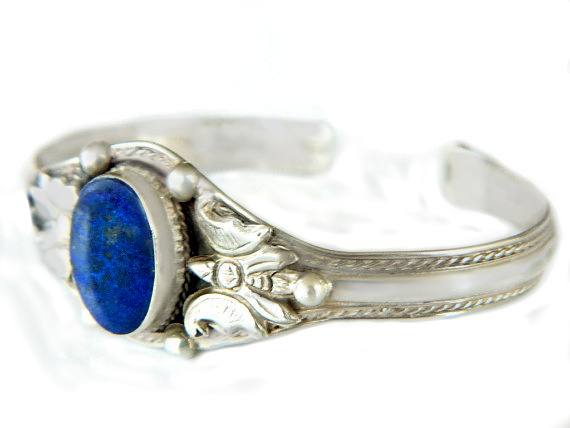 Herman created The Harvey Style Indian bracelet. He found that the large turquoise nugget bracelet did not find favor with the Victorian traveler. He had the Indian craftsmen reduce the size of the traditional Silver pieces to appeal more to the traveling tourist.

I've collected many different types of antiques and vintage items over the past 40 or so years and have been esp. interested in hand made nicely designed artistic and beautiful items.  Most of my finds were discovered at thrift shops, antique stores and consignment stores in Northern Virginia and I was surprised at the many Sterling Silver items that I purchased for perhaps $5 or $10.  Obviously the people who were pricing these items missed seeing the "925" or the "Sterling" name engraved on these items.  I once had to see the manager of a thrift shop near my old job to purchase this beautiful Navajo Squash Blossom Necklace; it had 2 distinct features that I later discovered when I was researching this type of necklace.  It was in a case with another necklace but I found this one more attractive; it was priced around $450 but I told the manager that I wasn't aware of the value (which was true) and the best I could do was $325.00.   She didn't at first accept or refuse my offer but got busy with another customer and then when she came back to me gruffly asked me:  "Do you want it or not?"  I couldn't believe her rudely uttered comment but I then did buy it.  I researched this necklace online and quickly learned that it was created using Morenci mine Turquoise and then learned that the mine had been exhausted and had been closed.  I also learned that the Navajo typically did not stamp their necklaces because these were usually buried with a deceased owner; this necklace was stamped "P. P." for the creator named Peter Padilla. It was in excellent condition and I likely should have kept it since these have been increasing in value but decided to list it on eBay for a fixed price of $850 and it sold within about a week.  The buyer gave me good feedback so I know that she appreciated her purchase.  That was about 3 or so years ago and I believe that this necklace now might bring $1,200 due to how beautiful and rare it is -- especially being engraved with the artisan's name.  Not a bad profit for a thrift store purchase, yes? 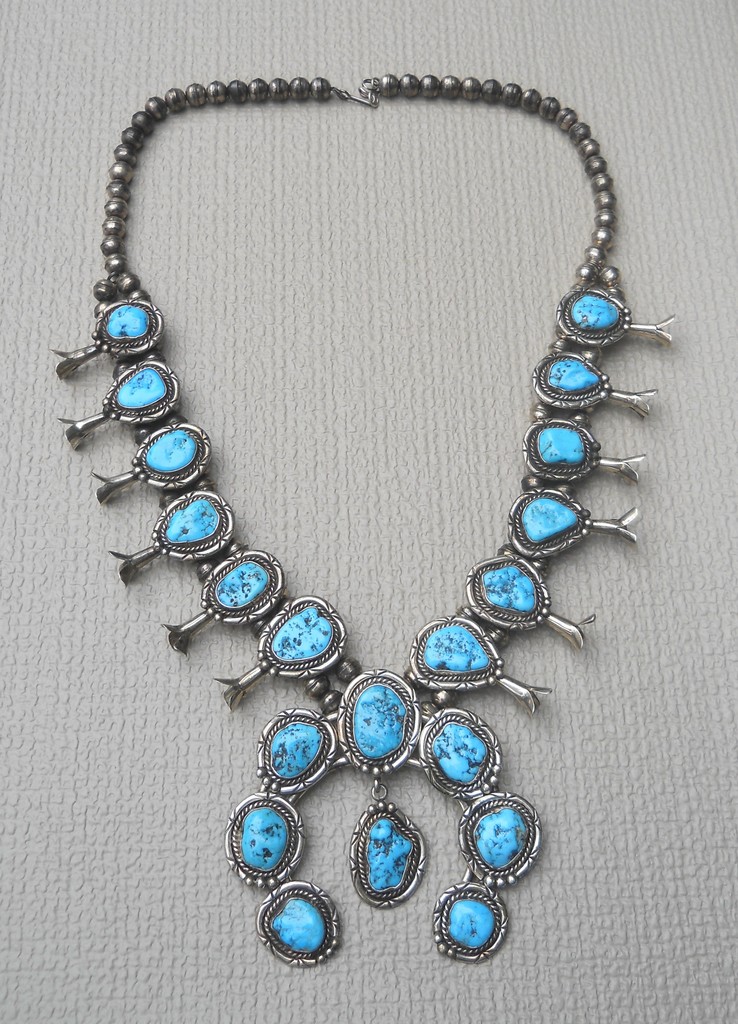 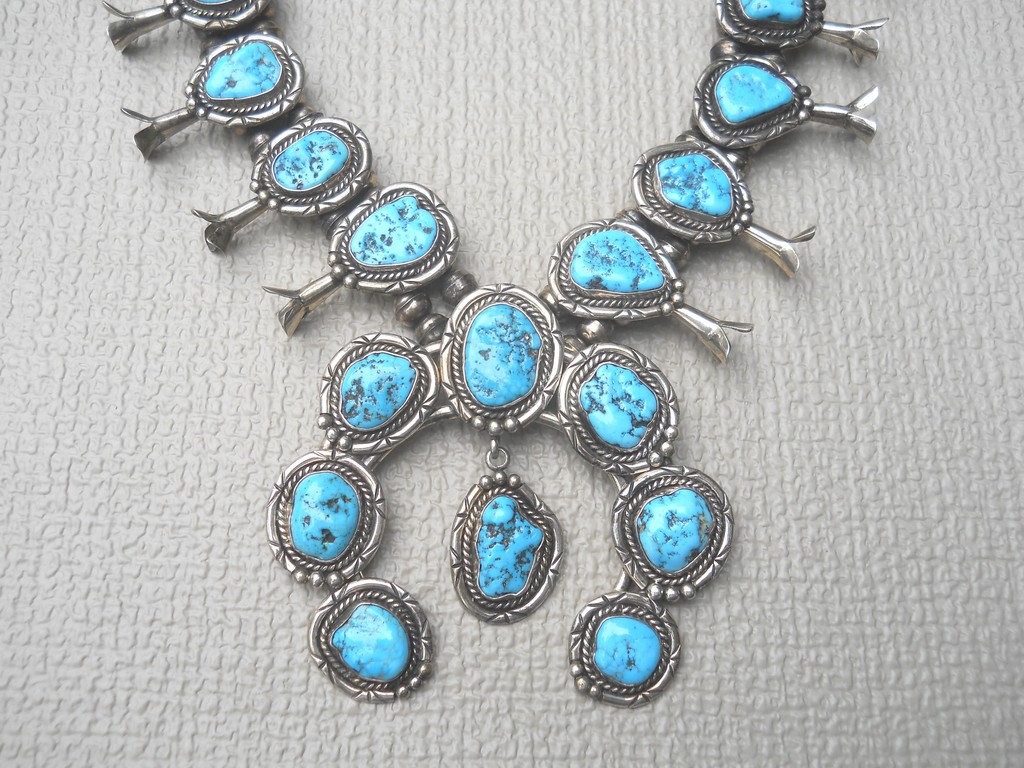 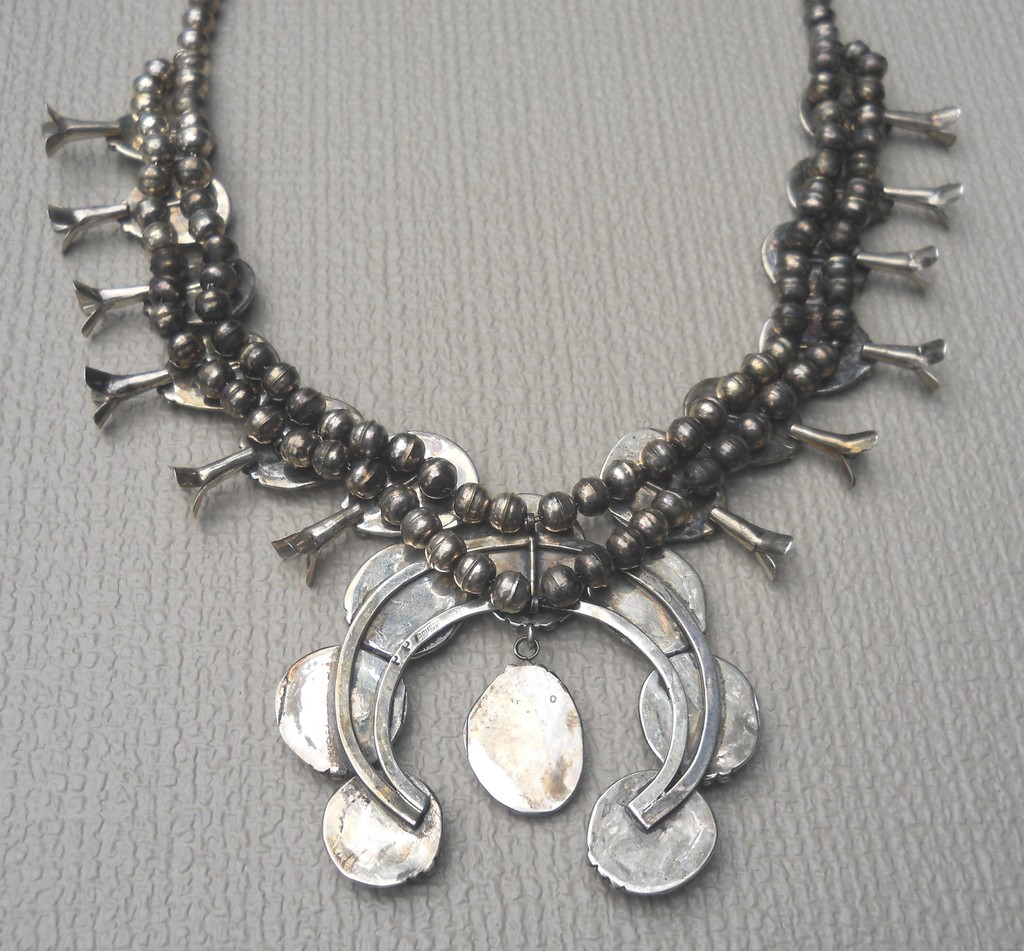 A very interesting read! Thank you for sharing.