Hello,
Does anyone have any insight about these furniture casters?
They are marked "Universal 7" and have an iron cross on them.

I'm interested to know how old they are and who the maker might have been.
Any help would be much appreciated! 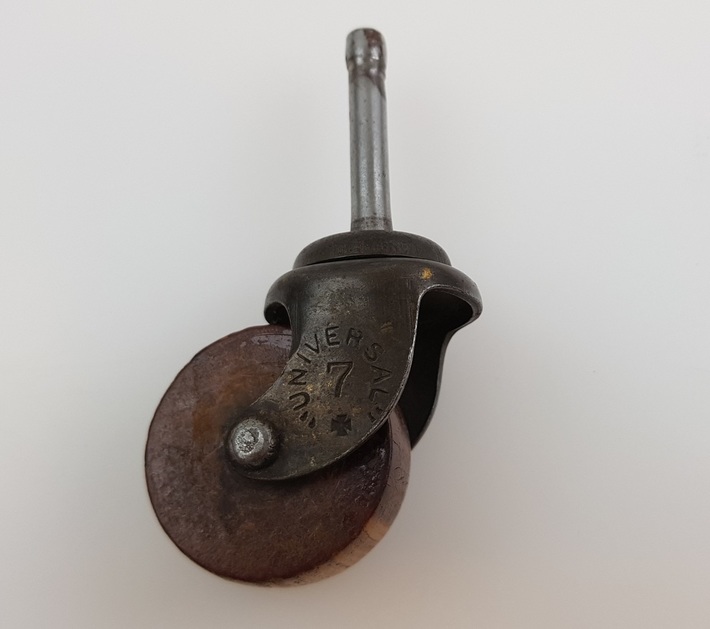 Thank you for the link. I have found some online, but they don't provide any
info about a maker or put a date to them. If anyone knows more, I would really

appreciate it! Thank you for your response!

Sorry to say, but I have not come across a specific date or manufacturer of these awesome wooden wheel casters.  All the descriptions are Vintage, Good Working Order, Original, etc.

Those are the makers I have found to narrow the search.

Look to see if the caster is a leathern bowl or roller. This is one of the earliest forms of casters, indicative of furniture made during the Queen Anne period in the early 1700s.

Inspect the casters to see if they are made from wood and held in place by iron. Wood casters held by iron plates might indicate the Georgian Period from 1720 to 1760.

Determine if the casters are made from cast iron instead of wood. This would indicate a later Georgian period, from 1760 to 1770.

Check to see if the caster is brass with a laminated leather caster. This style could indicate the Georgian period from 1770 to 1780.

Verify if the caster is solid brass. This can indicate the furniture style of the Georgian period from 1780 to 1790. The late Georgian period, from 1750-1830, is referred to as "The Golden Age of Furniture."

This is excellent information! Thank you so much for your reply. I asked The Auction Professor and he said it may be related to the Co-Operative Foundry of Rochester NY. They were the manufacturers of the Red Cross Stove. The cross looks like their logo. But I cannot find any evidence of them making casters. I will keep digging.

alot of companies used that cross style in logos

looks to be a ball bearing style of caster, this style stem/ mounting pc was used late late 1800s thru to today we still get casters with that type of a stem,

i believe this caster is from 1890- 1940, which at that time we were getting more hard rubber caster wheels

the previous stems on american casters were either a straight in friction fit, a splined shaft, or whet into a 2 pc cast iron insert, and the stem looked much different these types of casters were usually what was on the walnut victorian furniture

Thank you for your replies. This is great info! I appreciate the lesson.