The History of Tea Caddies

The word caddy is derived from the Malay word ‘kati’, a measure of weight equal to 1.4lbs or 630g approximately.  A tea caddy is the general term given to a container which holds loose leaf tea.

In the 17th century tea caddies were bottle shaped tea jars in china, glass, silver and enamel, fitted with covers to keep the contents dry.  Such caddies came in a variety of forms and were also referred to as tea canisters or tea chests.  Originally these receptacles had no provision for a spoon, but by the late 1690’s, some of the covers were shaped like a small cup and this was used to measure the loose tea.  Few tea caddies survive from prior to 1700.  Caddy spoons used to measure tea leaves were introduced by the mid 1700’s.

As tea was an expensive commodity in the 18th and 19th century, many caddies were either fitted with integral locks, or were themselves fitted to a locking chest.

Although silver tea caddies tended to have a rectangular form, elliptical and octagonal examples from the late 1700’s have been recorded.

Wooden tea caddies lined with lead were made in the mid 18th century.  These caddies had hinged or sliding lids and were designed with integral caddy spoons. 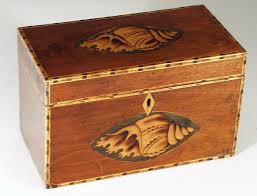 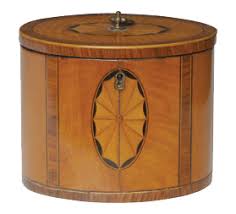 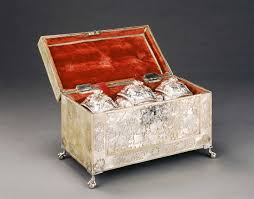 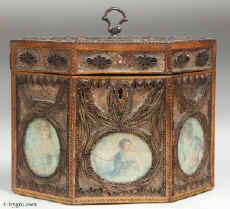 I truly enjoyed reading this, what fabulous information and photos... thanks so much for posting! :)

Permalink Reply by Toronto Antique Shows on February 27, 2011 at 10:50pm
Thank YOU Caroline!  I'm glad you enjoyed reading it.