Pretty soon I should have my own page, here.

Speaking of here, here's a piece I found, thinking it was Anchor Hocking.  I got it home and saw more of a pick and circle.  I wouldn't have picked it up except that I found 'Your Credit is Good  Nuf-Ced' embossed on the underside.  What can't be shown is a small 'Z' in the bottom of the bowl.  The best info I've gotten is an advertisement for Prager's Market in San Francisco.  I am unable to find the hallmark online.  One thought is the bowl was a giveaway at Prager's.  Others might be bank, loan, title...  5-3/8" round. 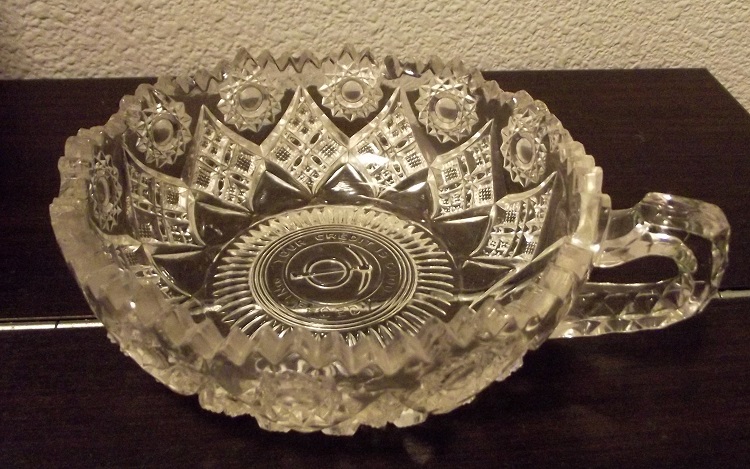 Have you posted the ashtray yet? I'd love to have a look-see!

That's the actual posting and number.  I don't know if I priced it high or low.  Not really sure I know I care.  It was a nifty search.

The book I found the pattern in is eating my brains.  I've been finding a number of other patterns I can't even hope to describe.

Not sticking to the ubiquitous 'old glass' motif, I found a block of glass with '1244' above and 'Google [X]' below, inside the block of glass.  Like you see the scorpions suspended in candy or plastic.  It's the serial number for a set of 'Google Glass' glasses, given to the purchaser.  What kind of random thing is that?

Very Nice indeed! But you linked me to a nappy, not an ashtray? lol

Now, onto this magical book, what is the title of it? I'm terribly curious, as I don't know of many that "eat ones' brains" :P

I think you've lost me yet again on the "Block of Glass" thingie whatsit? What the heck is it? and do you have a picture?

I was going to get on your case for calling my nappy an ashtray.  I had to go back to see what was going on.  Now we're rowing in the same direction.

That piece got put on the back shelf.  It really is so obscure and/or Mexican pottery generic, I probably won't spend a lot of time in the research.  Signatures, even if not by a 'listed' artist, air bubbles, factory defects, the finger impressions on pottery, they all get me thinking I need to hold on to it because when the person dies, Victoria De La Cruz will turn out to be an acronym for, 'Genius Primitive Art Pottery.'  She's on another piece.  Same-same.

The book is 'Standard Encyclopedia of Pressed Glass 1860-1930 Identification and Values' by Bill Edwards and Mike Carwile.  1999 Copyright date.

Ah Ha! I have that book too! It's a good one! I think you might really like "Field Guide to Pattern Glass" by Mollie Helen McCain.

Because she lists items via "decoration" rather than having to go through the ENTIRE book to find one item, instead you can choose from categories: Animals, Circles, Diamonds, Shells, Fruit, Flowers and etc.... Although I'm not that happy with the sketchy info that is sometimes included, but that's where the other books come in to help. It's a decent system, if your loving the old EAPG.

Now, onto the curious ashtray - It is pottery then? There is quite a nice group here for pottery ID as well. Ellene Runs it, and I'm sure we both would love to see it!

I would likely agree with you on the "mystery studio artist" in any "pick a category"! However, I've recently been studying up on MCM era Pottery, as some of those artists are selling for Big Bucks $$

I got Kovel's small, inexpensive guide for this; Kovels Identification Guide to Contemporary American Pottery, 1960's to present" It has small color pics along with info on the main artists.

I know "beans" about "modern stuff" which is rather annoying too! I've spent more than 25 years studying "Antiques" only to find that nowadays I have to learn about "Modern" MCM things and stuff! UGGGGGGGG!

If I can figure out the differences between all the stars an paddle wheels and bursts and such, I'll be happy.

I've thrown pottery and can understand the emotion and work involved in creating a piece.  A thoughtful human touch is evocative.

Lol! Yes, it is a bit daunting at first, but really it makes sense (mostly,not always) "Diamond, Circles, Beads" etc. What drives me nuts is when you think a piece with a very definite design might be called something similar.. ie
"Wild Strawberry" on a strawberry design, only to find out it's called "Sunny Day" UGH!

And I agree on a potters work as well! Are you familiar with George Orr, aka The Mad Potter of (Biloxi) Mississippi? I would LOVE to find anything made by him!

I'm not familiar with pretty much any potters.  I have a decanter and three cups.  The cups are signed 'Fogarty' but the decanter is not.  The decanter also has a big crack in the bottom I didn't notice because I was too excited.  The decanter (and cups) are very steam punk.  My opinion, anyway.

Point being, I need to take a valium before I go hunting or I'm going to wind up with a bunch of real neat stuff, sitting around my little apartment.

I'm sorry to hear about the decanter, and I would LOVE to see it to, being a Big Fan of Steampunk also!

I'm just hoping you won't be driving for the hunt? LOL, and what in the world is a collector/dealer doing in a "Small Apartment" - that is an oxymoron, me thinks! :P

Permalink Reply by tomsantiquesetcetera on May 5, 2016 at 9:57am

I vote for miner's pick and gold pan.  NOT an anchor. Rather than a supermarket, I'm thinking it was a miner's supply/hardware store.  Nice piece of glass. Where does it say Pragers on it? BTW Pragers is usually spelled Praegers.  Gold mining in California was pretty much finished by 1860 and other areas were being "rushed".  Idaho 1860s-70s, BC Canada 1870s, Australia 1880s, Alaska-Yukon 1897-1910.

Like Vicki suggested I think you have a reproduction from the 1950s-60s.

Were my cable company be worth a grain of sand in the Sahara, I would have posted a great reply, Tom.  Let's try again.  I'll start by refining the pattern:  Northwood's #12 Advertising (Near-Cut).

An odd Google of... whatever it was, got me to the California Digital Newspaper Collection.  I further found http://cdnc.ucr.edu/cgi-bin/cdnc?a=d&d=SFC19060708.2.32 with reference to 'Your Credit is Good'.  In the end, the newspaper ad had nothing to do with my piece.

Why do I not think it's a mid century repro?

The sharpness of the points and logo embossing are crisp and defined.  Even the handle of the pick has dimensionality.

Were it repro, something should have shown up in a diligent search of the myriad permutations of words that describe the piece.  As it is, mine is the only one that comes up.

The beginning of manufacturing was in 1906.  Well within your time frame for the Alaska-Yukon gold rush.  Thanks for that one.  I hadn't considered.  And thanks for the seconding of my vote of pick and shovel.

Comparing mine to the same patterns online: there are similarities that would be hard to reproduce.  The curved, clear areas have the same wavy optic.  Like old window pane glass.  I don't have a good picture.  A quick search will find you a good shot.

Northwood went out of business in 1928.  If this were a mid cent repro, would the same Northwood N logo be embossed?

If one or two of these were true, it might not be anything.  5 is more significant.

Bill Edwards and Mike Carwile's book 'Standard Encyclopedia of Pressed Glass 1860-1930: Identification and Values' is the only reference I can find.  It's the same pattern.

Just an FYI, I agree with Scott on time frame, and NO, the Northwood "N" in circle has not been reproduced, as of the last time I checked ( about a year ago).

I "guessed" repro at first, but after all the research I no longer think so. I do think it's a "period" EAPG advertising piece.

The Alaska angle is a good one, Hope you find something with that!