There's PYREX and there's Fire-King, but this group celebrates Glasbake, some of the most colorful ovenware ever made!

My first career was elementary school teacher with a Master’s degree as a Reading Specialist certified for grades one through twelve. As years in the classroom passed, I watched the Autism rate for American children change from one in every five hundred children to one in every one hundred twenty-five or one in every one hundred twenty depending on which research study is sited. Mainstream media has finally come to acknowledge this crisis and after decades of denial, Autism is openly discussed. Back in the 1970s I had already come to my own conclusions: the explosive increase in the use of plastics must hold a connection to the devastating loss of our children to Autism.

Today an Internet search will reveal that researchers are starting to take a serious look at plastics and other environmental issues as they relate to Autism. From WebMD, January 8, 2009: “Environmental factors may be partly behind California's eightfold rise in new cases, a new study implies…Hertz-Picciotto notes that the lion's share of autism funding is going to genetic studies. She argues that it's high time more effort was put into looking for environmental factors that cause autism in genetically susceptible individuals.”

Why do I personally focus on plastics and Autism? I actually believe the negative impact of plastics goes beyond the scourge of this disease and into many arenas of our health. Take a look at the recycling numbers found on plastics. These digits represent discrete chemical cocktails that when exposed to food even the American Chemical Council admits will to some extent always leach into food. If plastics can be a delivery system to bring chemicals to living beings simply by being in contact with food (plastic storage containers, plastic wrap, Styrofoam meat trays, plastic drink bottles, etc.) imagine what chemicals our orally-fixated babies are exposed to when toys, nipples, waterproof books, and more are placed directly in their mouths.
So let’s take a brief look at these numbers:

Look carefully at the examples given for number7 plastics. Last March, the Environmental Working Group reported the results of a study in which a national analytical laboratory tested 97 cans of food for BPA – number 7, and concluded that cans of chicken soup, infant formula, and ravioli had the highest BPA levels due to the plastic liner now found adhered to the inside these cans. We are making our children, who are most susceptible to the dangers of chemicals, sick. One in three cans of infant formula had BPA levels 200 times the government's traditional safe level of exposure for BPA.

On April 19, 2008 The Canadian government moved to ban polycarbonate infant bottles, the most popular variety on the market, after it officially declared one of their chemical ingredients to be toxic. Plastic baby bottles have been banned in many parts of the world, but not in the US.

Let’s not forget the potential danger of using plastic bottles for water. According to the Clean Air Council, Americans discard 2,500,000 bottles every hour. We are filling up our landfills at an alarming rate, assuming the bottles aren’t simply being thrown out as litter. For a safe, green alternative, consider using a stainless steel drinking bottle.

Certainly you must have smelled the strong odor associated with a new shower curtain or shower curtain liner. What you are actually smelling and breathing in is a cocktail of up to 108 chemical compounds that are out-gassing. Seven chemicals, which include toluene, ethylbenzene, phenol, methyl isobutyl ketone, xylene, acetophenone and cumene, have been identified by the Environmental Protection Agency (EPA) as hazardous air pollutants, according to Stephen Lester, the Center for Health, Environment & Justice's science director and a co-author of a report indicating the connection of human health to new shower curtains. Potential health effects included developmental damage, harm to the liver and the central nervous, respiratory and reproductive systems. The study also found that the shower curtains contained high concentrations of phthalates, which have been linked to reproductive effects. (http://seattletimes.nwsource.com/html/nationworld/2004474448_vinyl13.html)

My contention is: keep your food away from plastic; we are just beginning to learn what these chemicals have been doing to our bodies and especially our children. Even though several numbers shown above are deemed OK or safe, I suggest that in the future more will be revealed to indicate that all seven numbers are simply hazardous to humans in regard to safe food handling.

We have many safe alternatives, and these represent that best of what being green actually means: reuse. Vintage (and contemporary, but let’s use what’s already here!) glass offers great solutions, and the impervious nature of glass will keep it from leaching chemicals into your foods. Companies like Jeannette, Federal, and McKee produced colorful glassware that is perfect for storing and serving: refrigerator dishes, storage jars, canisters, shakers, and so on. These pieces are here now and have been for decades; they are not being produced in Chinese factories that belch pollutants into Earth’s atmosphere.

It is important to note that if you are interested in glassware that can be used in the oven or microwave, select pieces that were tempered and therefore can easily tolerate extreme temperature changes. For glassware that meets this standard utilize PYREX, Glasbake (McKee’s version of ovenware), or Fire-King. These products can go from the freezer to the oven and even, if no gold is present, the microwave. The key in determining the viability of a piece of glass for the oven or microwave is to select glassware that was “ovenware.” Fortunately, many of these vintage delights will be marked with this word making it easy to determine what pieces of glass can meet your baking and reheating needs.

PYREX products abound! From the earliest clear pieces to the colors introduced in the 1940s, this glass ovenware offers everything from refrigerator dishes to mixing bowls to measuring cups. Don’t forget Corningware or Corelle. Corningware casseroles are abundant and can be acquired in thrift stores and yard sales, not just in antiques malls. Store your leftovers in glass and use a CorelleR plate as a cover in the microwave because research clearly indicates that plastics simply don’t belong in a microwave. And how about the fabulous pieces of Glasbake with lovely, under-appreciated designs!?

Look around your own kitchen. Chances are you already have pieces of glass that would provide an easily-adapted alternative for safe food storage: canning jars, peanut butter jars, etc. Think outside the (plastic) box a little and you, too, can create a greener household and ultimately a greener planet.

I bought the book this week (Amazon) I was hoping to find some info one the posted pyrex  'roasting pot'?, would you by any chance be able to identify it, base or lid? and what is the correct piece…Continue

I'd like to buy a lid or, if necessary a complete dish WITH its lid.Please e-mail me.Thank you.Continue

You need to be a member of Collectible Glasbake Ovenware to add comments!

I am falling more and more in love with GLASBAKE! 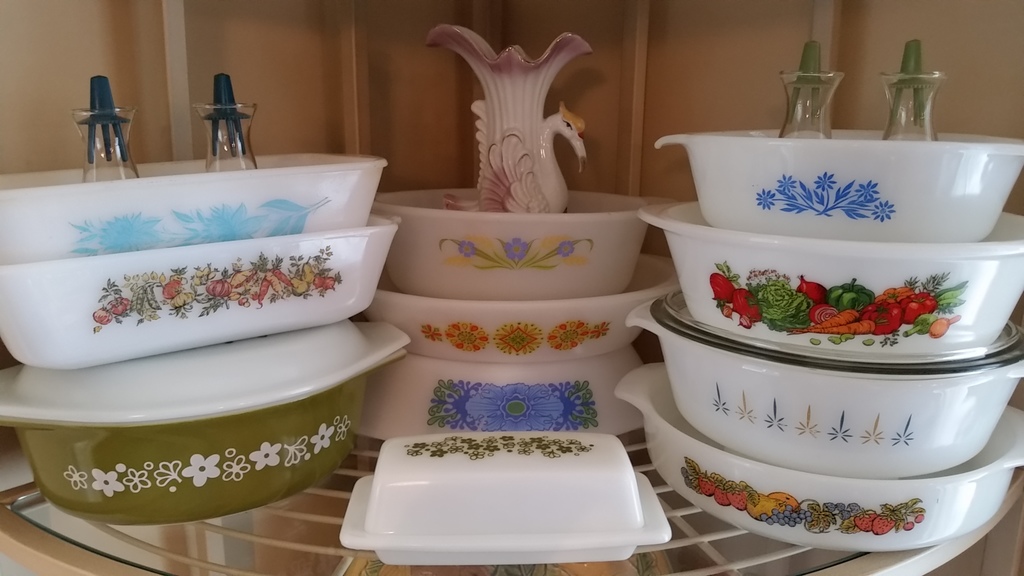 I think this one is called Starburst? 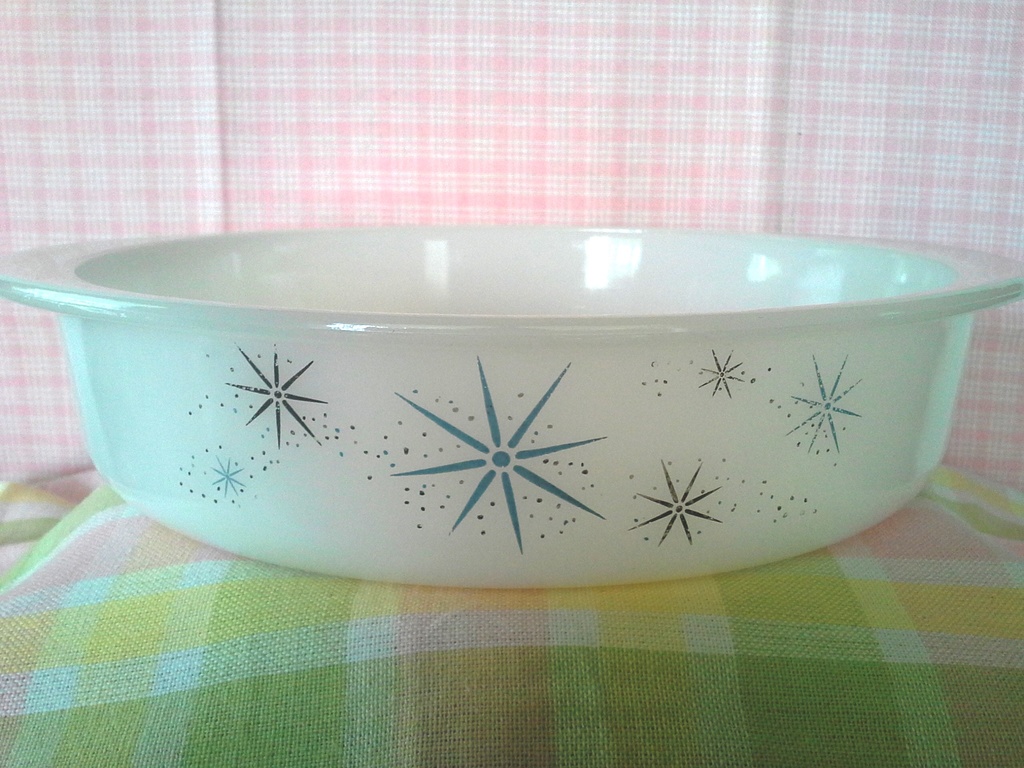 Believe they call this "Love Birds" - it's a divided dish by Glasbake! 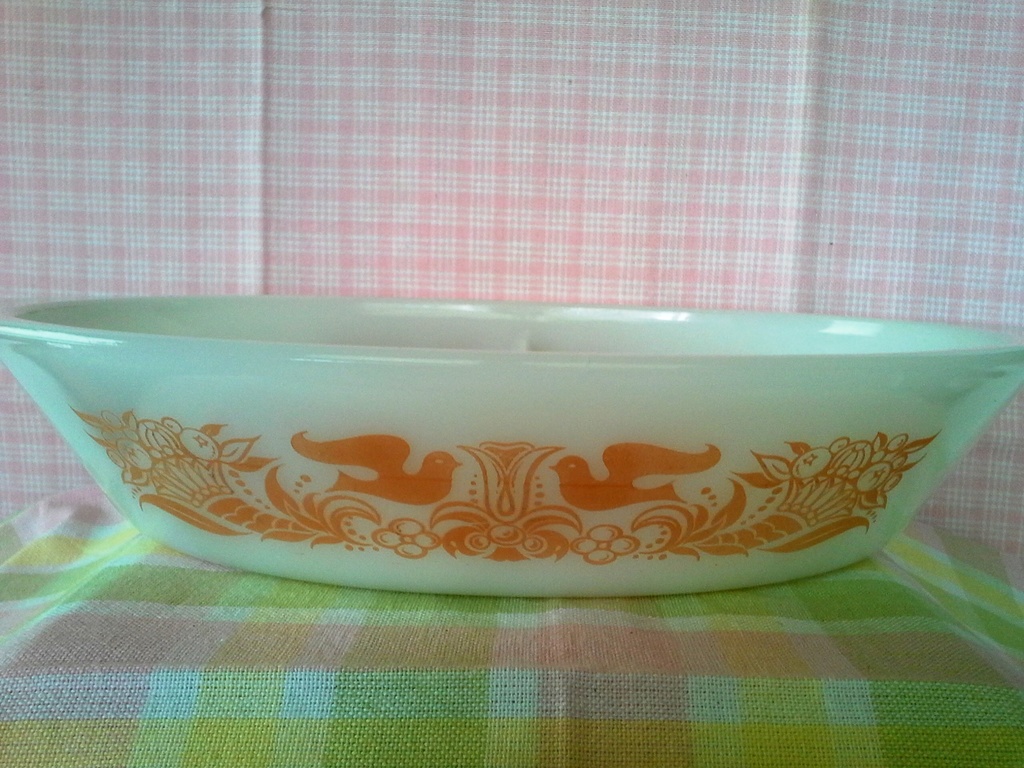 Deb - "Philbe" was made by Fire King - aka Hocking, Not Glass Bake, just fyi!

I like your Going Green with Vintage Glassware article above.  Since I have "rediscovered" Glasbake, Pyrex and Corning Ware again, it has made me want to actually use it in my everyday cooking (and of course display/resell the really pretty pieces - Lol). My husband is retired and he constantly finds vintage pots, cast iron skillets, etc. and we have begun using these more and more rather than the "coated" skillets. We have found the food tastes better.  Sometimes the older cookware lasts longer and I also believe better for you.

Does anyone collect the clear glasbake pieces with the raised philbe type pattern?

Yes, these originally came with cottage cheese. You popped off the lid, had the cottage cheese, and then the container was "free." This was a common form of marketing. I am sure you could use these for onion soup, but it might be tricky. You can't keep the basketry on when you put them under the broiler and they would be way too hot to handle to slide them into the basket, so I am not convinced that they were for onion soup. I am sure that you will find many more appropriate used for them. Imagine an ice cream social with toppings in all of those different candy-colored containers. I would do that right away ~ invite some people over and have some fun with them!

I actually have a set of 4.  Whoever sold them to my husband said they were for baking onion soup.  Then when I did a little hunting online, some people said they were sold with cottage cheese in them.

That basket is fabulous. It's a first for me, and I hope group members jump in and let us know if they've seen this before. I love it!!!

New member of this group - I found these last weekend.  Anybody ever see these cute glasbake jars with little baskets before? 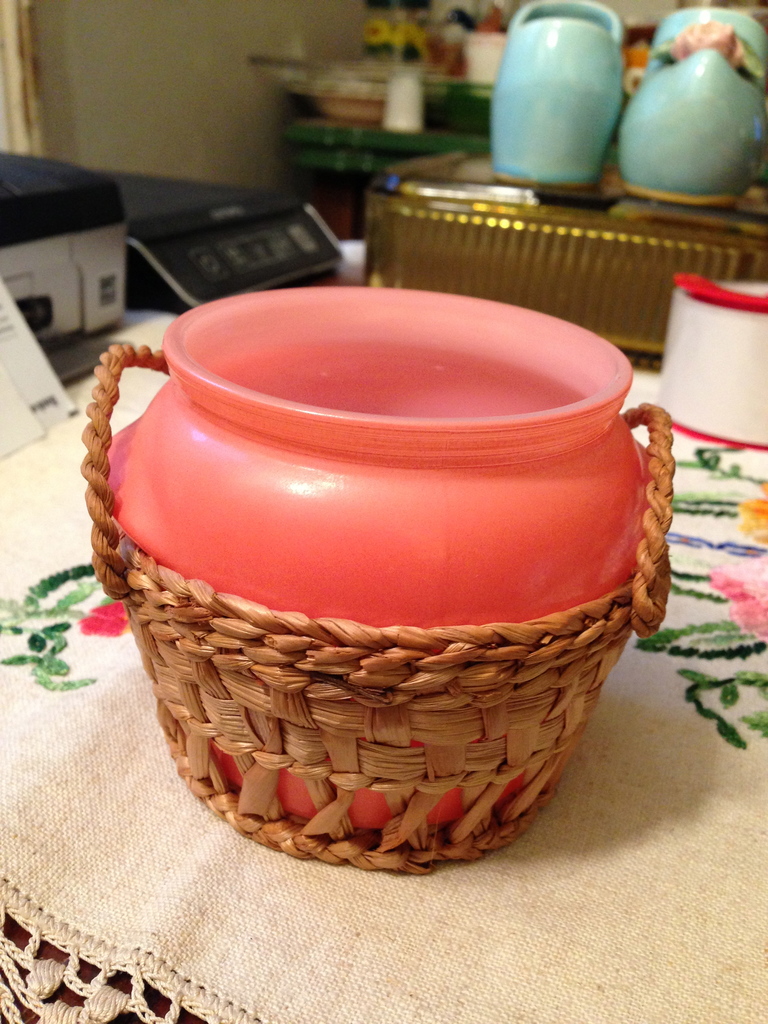 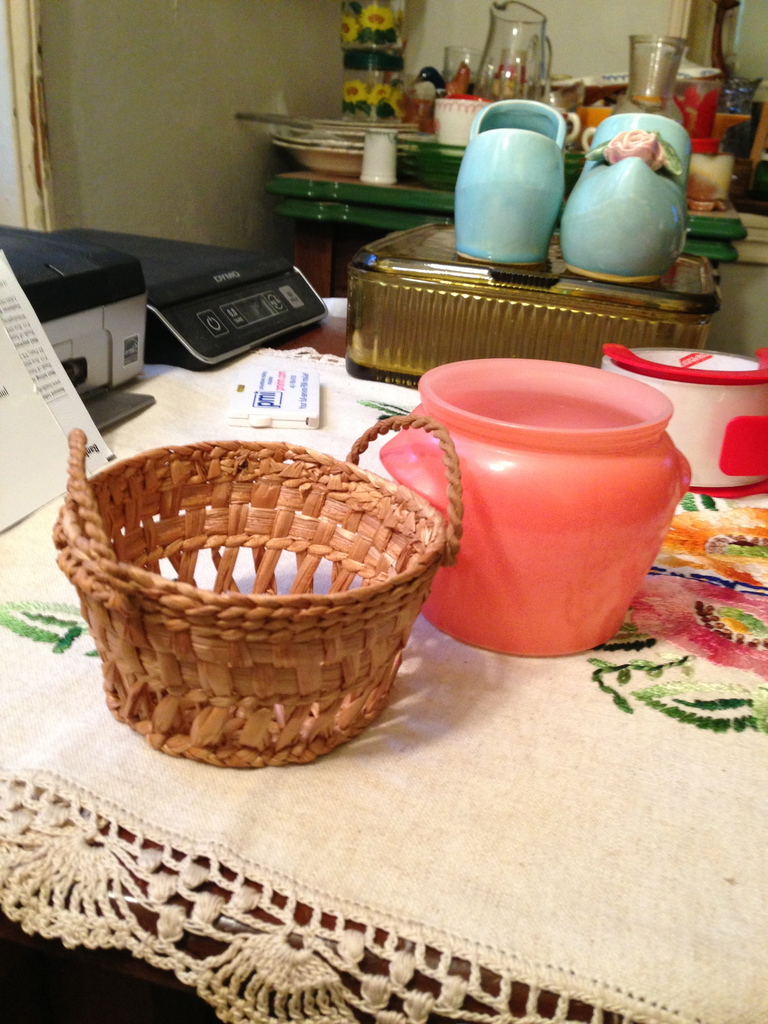