Welcome Back to the Catskills

There have been many books written about the Catskills but never has there been such a richly illustrated volume, containing over two hundred and fifty illustrations, photographs and vintage post cards. The Catskills has been the summer retreat for thousands of New Yorkers for over one hundred years. This book features many of the grand hotels such as Grossinger's, the Concord and the Nevele which served as the training ground for some of the greatest entertainers in the world, including Sid Caesar, Eddie Fisher, Robert Merrill and Neil Sedaka.


The book includes photos of the Delaware and Hudson Canal which was built by the same engineers who designed New York's Erie Canal. They commissioned John A. Roebling to design several suspension bridges in 1849 for this project. Roebling later went on to design his most noted project, the Brooklyn Bridge in 1883. The book has a section devoted to the Ontario and Western Railroad which brought thousands of New York City residents to their summer resorts in the Catskills. The railroad has been replaced with major highways, but several of the old railroad stations that survived have been restored and recycled into other uses.

There is a section in the book devoted to the Jewish farmers who moved to the Catskills around the turn of the 20th century from New York City. Their farmhouses were turned into boarding houses during the summers. Some of these boarding houses eventually evolved into grand hotels. The farmers and merchants from nearby towns built country synagogues. Many of these wood-frame 90-year-old structures are still standing. In recent years, some have been restored and have been listed on the New York State and National Lists of Historic Places.

There are photos of daily life in the small towns and villages which serviced the many grand hotels. One of the most interesting aspects of the book are the local advertisements from the 1890s through the 1950s. This book illustrates one of the most famous resort communities in the country and provides a glimpse of a lost innocence of Americana. There are photos of proud Americans parading in their "Sunday best" with the horse-drawn coaches down Main Streets, firefighters riding in their firetrucks in the 1910s decorated with American flags and just plain folks enjoying their summer vacations. 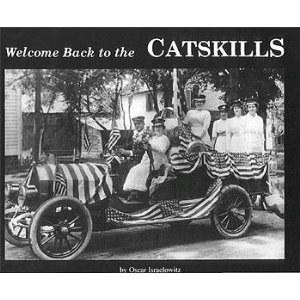