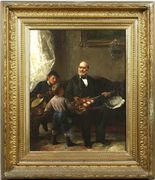 We have been commissioned to sell items from the Grant family, descendants of President Ulysses S. Grant, as well as important gas chandeliers from the White Lord House, 31 Washington Square North, Salem, fine furniture and porcelain from the descendents of Francis B. Crowninshield of Marblehead, and fine objects from part III the Estate of Robert O. Peterson of San Diego, CA (1916-1994), founder of the Jack in the Box fast food chain. This is a sale not to miss!

Objects from President Ulysses S. Grant and his Descendants:
Four generations have emerged since Ulysses S. Grant (1822-1885) served the United States, first as General-in Chief of the Union Army, and later as the country’s 18th President, but his personal belongings remained treasured by his descendants, lovingly passed down through the generations. Grant’s Great Great Granddaughter recalls her grandmother sharing tales about many of the family’s links to the era of U.S. Grant, including tales surrounding presents from Heads of State. Objects directly and indirectly associated with Grant’s military and political career are also intermingled with many personal, domestic, photographs, and decorative objects favored by the family, including silver, rugs, clocks, and furniture. Some of the objects in the sale are from the Grant White house, or collected during the Grant’s celebrated trip abroad, shortly after Grant’s second term ended. Grant was the first President to travel the world, starting first in England and ending up in Japan. Grant’s Great Great Granddaughter relates that the Blue and White dinner service had been presented to Mrs. Grant by the Emperor of Japan, as well as a lacquered tea box inscribed with the Grant name. Many objects are also from the Grant’s son Jesse Root Grant and granddaughter, Nellie. In all, the Grant collection is more than antiques with a solid provenance. The collection represents many years of family and memories assembled in furniture, rugs, manuscripts, and decorative objects passed from generation to generation, from Grant to Grant.