Glad you could drop in... 'This drink is on me'.
In New Orleans La. stands a proud building who has weathered many storms. Built by German immigrant Louis Grunewald. Named after him then called The Grunewald. Some people consider this hotel host to the very first night club in the United States. This night club was called 'The Cave".
The Grunewald opened it's doors for business in 1893. The hotel over the years went through many changes and expansions. When in 1923 a group of New Orleans investors purchased the hotel and renamed her "The Roosevelt Hotel" in honor of the late president Theodore Roosevelt. Many people refer to this historic hotel as "The Roosevelt Hotel" even after it was aquired in 1965 by The Fairmont Hotel and Resort, and renamed "The Fairmont". Even today she is know as "The Roosevelt Hotel" . 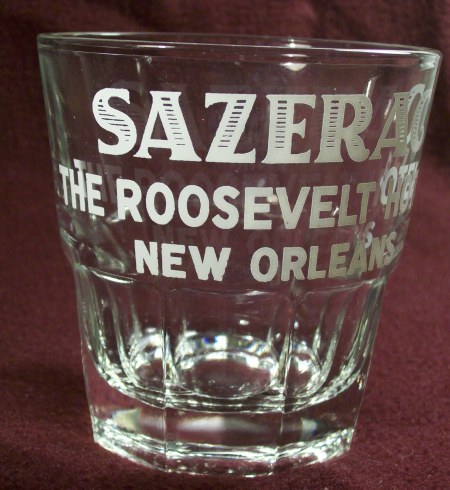 It was in 1859 when John Schiller opened Sazerac Coffee House in New Orleans. He served a cocktail called Sazerac. His coffee house and the cocktail more than likely derived their name from Sazerac-de-Forge et filz popular Cognac .
This cocktail is prepared as followes:
calls for 1 cube of sugar
1 1/2 ounces of Sazerac Rye Whiskey
1/4 ounce of Herbsaint
3 dashes of Peychaud's Bitters
and a lemon peel.
One old-fashioned-Western-style glass is packed with ice. In a second old fashioned, Western-style glass, a sugar cube and 3 dashes of Peychaud's Bitters are muddled. The Rye Whiskey is then added to the sugar/Bitters mixture. The ice is emptied from the first old-fashioned-Western-style glass and the Herbsaint is poured into the glass and swirled to coat the sides of the glass. Any excess Herbsaint is discarded. The Rye-Sugar-Bitters mixture is then poured into the Herbsaint coated glass and the glass is garnished with a lemon peel.

The original Sazerac Cocktail was a cognac based drink. In the 1870s, cognac was replaced with Rye Whiskey and absinthe was added.
(Absinthe has been legal in the United States since 2007.)

Comment by J. T. Bkins on April 20, 2009 at 1:31am
Amber Stokes, Sounds right, well maybe? More than likely the words got jumbled in the ...."mixed" drink? If you know what I mean? I just browsed "A theory on the origins of the coquetier theory" , here you read ,""That is a little drink to hearten and steady one.... Aunt Belle said " Maybe they had one too many?

As for the ice, it was use to make the drink but the drink was not served with Ice.
Unless you are a tourist?

Comment by amber stokes on April 20, 2009 at 1:14am
"cocktail being a New Orleans bastardization of "coquetier", the French word for "egg cup",
which cocktails used to be served in. Seems similar to the sort of thing that
happened with martinis in modern times." we have three generations of bartenders from New Orleans who swear this is the story but what would we know. A 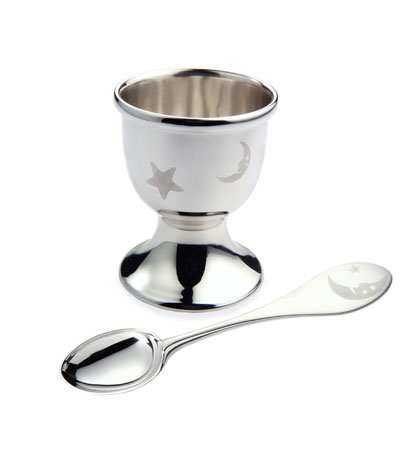 s for ice in the sazerac it is gently stirred with ice in a shaker as not to bruise the liquers and can be server straight up but one or two ice cubes are acceptable especally in the summer. never more than that because it is a sipping drink and will get watered down.

Comment by J. T. Bkins on March 19, 2009 at 9:49pm
Here is a very informative comment from an eBay seller regarding the Sazerac cocktail glass. Note: stirred2generosity is my user eBay name.

"Dear stirred2generosity,
FYI...the Fairmont closed in September 2005 after suffering extensive damage from Hurricane Katrina to the tune of $14 million. It has since been sold to the Waldorf-Astoria group which is owned by Hilton Corp. It is currently being restored and will soon reopen again as the Hotel Roosevelt. Your Sazerac glasses should sell between $60 -$100 each as these shot glasses are very rare to find. Your first shot glass embossed with the Roosevelt name is from 1923 - 25. the other three were made sometime after 1925. Hope this helps...I have an extensive collection of Roosevelt Hotel & New Orleans hotel memorabilia. Warmest Regards, Christopher Lesley...aka...golden_pineapple
- golden_pineapple"
Many thanks to Christopher Lesley... please visit him at golden_pineapple eBay.

Comment by J. T. Bkins on March 18, 2009 at 9:38am
Hello to you. Media such as the history channel can be a great resource for some info.such as this. Much of my own researching on "ice" and "sugar" came from running guestions on the browser. We also, learn from each other and have such a great opportunity here on "IAO".
This Cocktail glass has provided the means of communication and a deeper look into the development of two industries in the American culture that of ice and sugar.
You mentioned "Silversmiths" making cups for the "ice cream". The reference to the Sandwich Glass Co. 1826 on the coastal Mass area. The area is noted for antiques which falls perfectly into our industry. This is a good start for two more researches. There are various types of glassware of different shapes and sizes, all serving their own purpose.
I wounder if this cocktail glass design had it's origins from there?

Comment by rescuelifeproducts on March 18, 2009 at 3:44am
Hello. You are both right. I will only add the fact that while watching the history channel, I learn that Ice from the mountains was carried by ships to the united state many years before this country own the area in question.
In fact, the northern colonies of the united states greatly involved in its use. It was packed on ships to help preserve foods and later shipped in for use as a type of ice cream.
Silversmith made cups for its use. Later it was used in glass made the sandwich glass company.

Comment by J. T. Bkins on March 18, 2009 at 12:01am
Ah... my claim is stated within the context of a "hotel", and not just any hotel... this was The Grunewald Hotel. As my claim states this reference and to the night club named "The Cave" located in the hotel. see copy below.
Some people consider this hotel host to the very first night club in the United States. This night club was called 'The Cave".located within the hotel.You are not one of those people who hold this thought. And that's is ok... some know,some don't know? I never said every one made that claim.
As for Mary and Joseph they sought a room any room, due to the fact that there went out a degree that all should be taxed and that every one need to return to their city where they were born. This called for the cities, towns and villages to be overloaded with people. During that time unlike today... the town of Bethelhem was not a tourist destination. What kind of an inn it was we do not know - Bethlehem as I stated was no tourist center so the inn probably left at lot to be desired. There may not have been much in the way of a "night club" perhaps (a club) at your bed side to ward off the rats?
Inns in general are located within a country setting or road side. You may recall those that are long the interstate as one travels across the US. Often a light breakfast that may include a selection of coffees, teas, juices, fruits, toast, breakfast cereals and assorted pastries. Would often be called a"Continental Breakfast". This serving of food and drink did not indicate that there was any form of adult entertainment or night club.
Hotels on the other hand are normally located within the city and maybe even downtown. The Grunewald Hotel 14 stories tall taking up the corner block...did in fact host lavish night club. It featured waterfalls, stalactites, and chorus girls dancing to Dixieland jazz. Far cry from Mary and Josephs would be "INN". Prior to the use of sanitation rating cards or maybe health codes. The use of "ice" be it crushed blocked or .....cubed. Could have been used commercially and if used before it melted the shape really didn't matter? The end user never got the drink on the rocks any way? Ice only made the drink cold.
I do want to thank you for "dating" my cocktail glass. Either way you look at it, it is vintage antique and with much rich historical value. But here is the real kicker....this one is for sale.
I'm very glad to dialog with you to broaden the minds of the readers. Thank-you

Comment by tomsantiquesetcetera on March 17, 2009 at 8:03pm
Re first night club, what you said was not "...in a hotel.", but rather, "...in the United States." A big-g-g-g-g difference. They probably meant the "first night club in a hotel in New Orleans".

Commercial ice didn't become available until after 1920. Various ice making machinery was indeed invented before then but most of it was "not commercially successful".

First nightclub? Mary and Joseph sought a room at the local inn in Bethlehem. I know they served food and drink at the inn, and they had rooms to rent (isn't that what a hotel is?) That kind of pre-dates your hotel's claim by a few thousand years.

Comment by J. T. Bkins on March 16, 2009 at 11:49pm
Back to the ice cube, If I recall when visiting New Orleans it was only those "tourist" who ordered their Sazerac on the rocks. This cocktail is poured back into the second glass from which the guest would drink of having been served this glass not the one containing the ice.

Comment by J. T. Bkins on March 16, 2009 at 11:44pm
Oops forgot about the women and the first night club. While I agree the men who sought gold attracted fair lades during those camp fire night clubs of the mining camps.
However, I did say the "some people" consider The Grunewald Hotel host the first night club in a hotel. (not mining camp) I guess those gold rush folks who found gold could afford to stay in a hotel while the others got the tents? Just a thought?

Comment by J. T. Bkins on March 16, 2009 at 11:29pm
Refrigeration as we know it today is fairly new,mid 19th century to 1930 ice boxes were used. Ice was cut from frozen lakes and stored in "ice houses" then delivered by the ice wagon similar to the milk man. Okay,you say but this was in the south after all New Orleans "frozen lakes"?
New England took advantage of their frozen lakes and ice was shipped in straw packed ships to southern US. Hence the availability of ice.
Sugar cubes? Jakub Krystof Rad, inventor of the first sugar cube in 1841.In the US in 1730 a sugar refinery was opened in New York City by Nicholas Bayard. Raw sugar was imported to the colonies from overseas. During the Civil War the sugar industry of the Gulf States were destroyed (1861).
The cocktail reciepe may or may not be from 1859? But this gives a little history anyways. Thanks for the comments.