Here at AC Silver, we are certainly not in the business of encouraging anyone to smoke, however we know that many of our customers enjoy antique items which are unusual, quirky and reminiscent of a bygone era. Our selection of silver smoking accessories certainly fit the bill.

Some of you may or may not even enjoy a cigar, or know of a gentleman (or gentlewoman) who does, and for those of you looking for a charming and luxurious gift for that especially refined individual, a gentleman’s smoking compendium is the ideal gift.

This impressive example of ours is modelled in the art deco style, with the sophisticated minimalism and

distinguished air that comes with this particular style of silverware.

This silver smoking compendium features two separate chambers for cigars or cigarettes, cheroot cutter and a compartment for discarded matches. This is a magnificent piece which makes a fine item for display, regardless of your smoking intake.

The vesta case is an item which for a short period of time, was incredibly common and popular in Victorian era. The first incarnations of matches as we know them today were called ‘vestas’ – much in the same way as some vacuums are referred to as hoovers—vesta was simply the most popular match brand name!

These first matches or vestas were incredibly flammable and combustible, due to the abundance of sulphur used on the top of the match to ensure that it would ignore. This meant that any

friction at all could potentially cause the match to alight whilst in the pocket, and of course alighting all of the other matches in its vicinity! While there was no immediate solution to this problem until safer matches were developed, the method of keeping the match-user safe was to encase the matches in metal, so that if they should combust, the person carrying them wouldn’t suffer any injuries!

Vesta cases therefore became an item which every gentleman who was fortunate enough to afford it desired and needed as a matter of safety.

The Victorian sense of humour and whimsy which saw the increase in novelty items is evident here, with the image of a pipe paired with the text which jokes ‘Just one more.’

A serrated striking panel is usually featured on vesta cases, for lighting the matches, and with this particular example the silver on this panel is in fantastic condition and hardly worn.

We are fortunate enough to have a number of diverse cigarette and vesta cases here at AC Silver, and this particular piece showcases a wonderful example of Victorian erotica decoration, in enamel, on silver. The quaint image shows a woman daring to flash a bare ankle from underneath her bilious dress skirts, which would’ve been considered risqué during the Victorian era in which the item was produced. The cigarette case was one of the few conceivable items which could bare images such as this, as at the time, smoking was considered a gentleman’s pursuit.

This cigarette case is in presentation condition, but could still easily be used to contain and carry cigarettes… It is also far more attractive and amusing than any packet could be!

One of our most spectacular pieces here at AC Silver is our 9 carat gold cigar and cheroot case, a rare item which is exceptional to say the least. This would make a fantastic present for anyone who is a cigar smoker; it is the finest of its type which we have acquired. The quality of this piece speaks for itself, and its appearance and heft is unsurpassed.

One of our most attractive smoking related items, although this piece could easily be used in a home where lots of matches are lit for candles – is this elegant Edwardian match striker. This piece is comprised mostly of glass, with a serrated edge to aid the lighting of the match, and a silver mount with foliate detail.

This superb example of antique silverware would meld seamlessly into the décor of any home, and would sit comfortably amongst other antique items, or within a minimalistic modern space equally as easily.

At AC Silver we have great affection for these pieces of antique silver, as they seem particularly evocative and personal, holding great history. Whether or not you actually partake in the act of smoking, the fact that these items are incredibly handsome and noble is undeniable.

I've had this peened Sterling Silver cigarette case for at least 10-12 years and once sold it on eBay but the buyer sent me a message which said: 1) not Silver plated and 2) he added the weight which was not correct as I'd listed it but he mixed up ounces and grams.  I didn't like his 2 stipulations especially this was clearly marked "Sterling" so I refunded his money and canceled his purchase.  I still have this and haven't considered selling it since it's one of my favorite collectibles.  It has monogrammed initials "EJM" on the front but no maker's mark.  Based on my intuition alone and the design of this case I'd guess that it likely was manufactured sometime in the 1930's or 1940's. 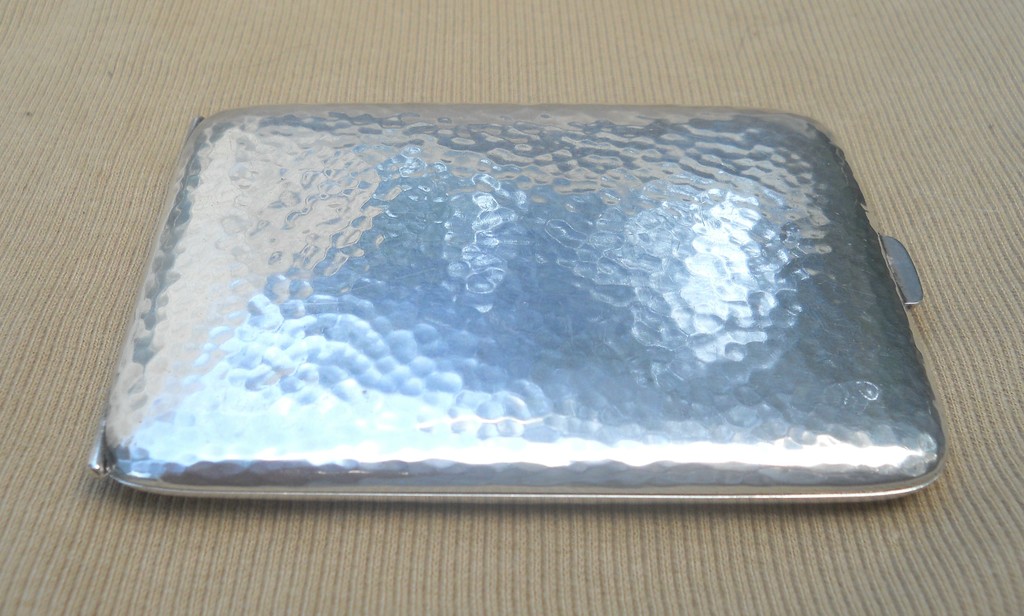 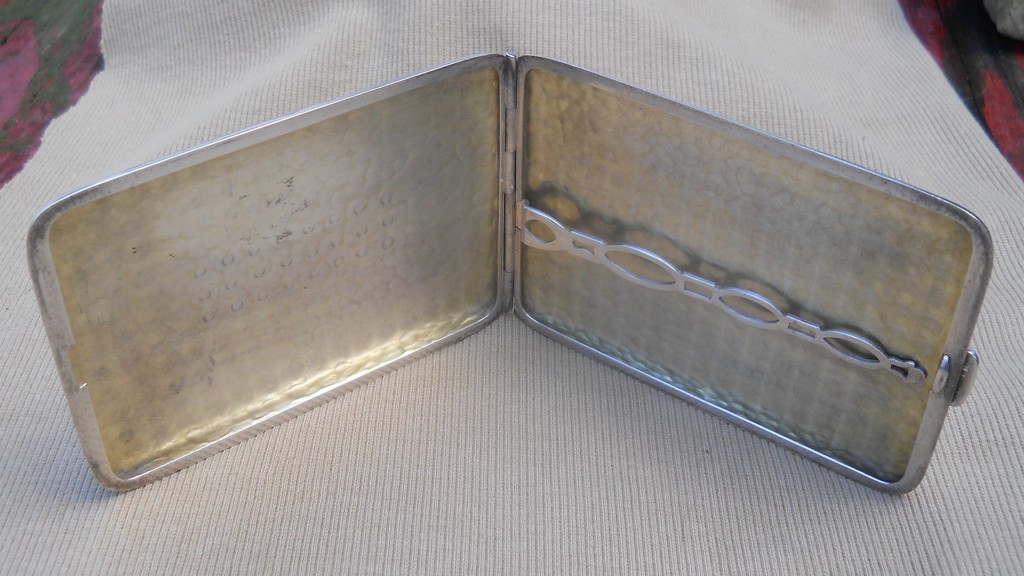 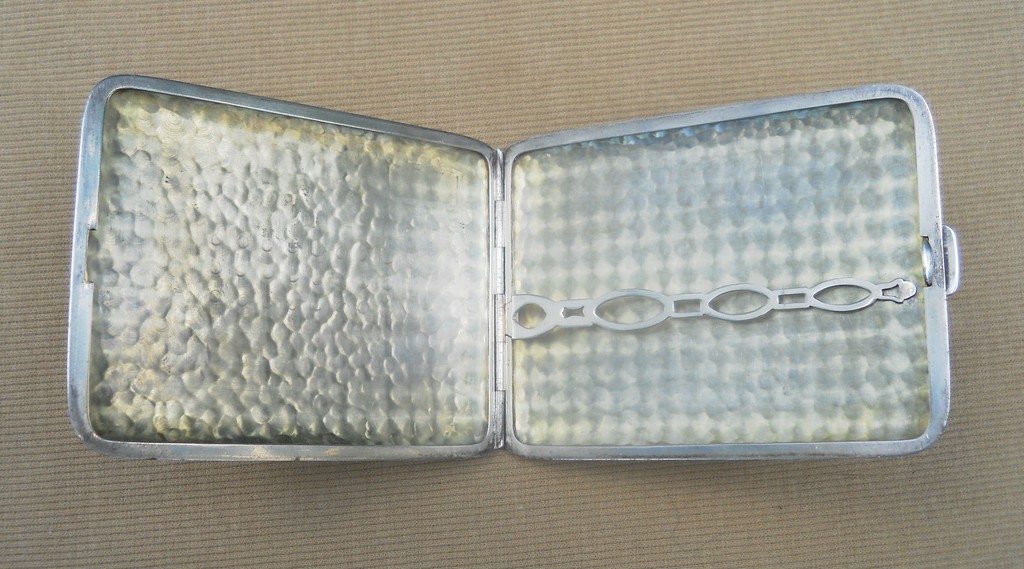 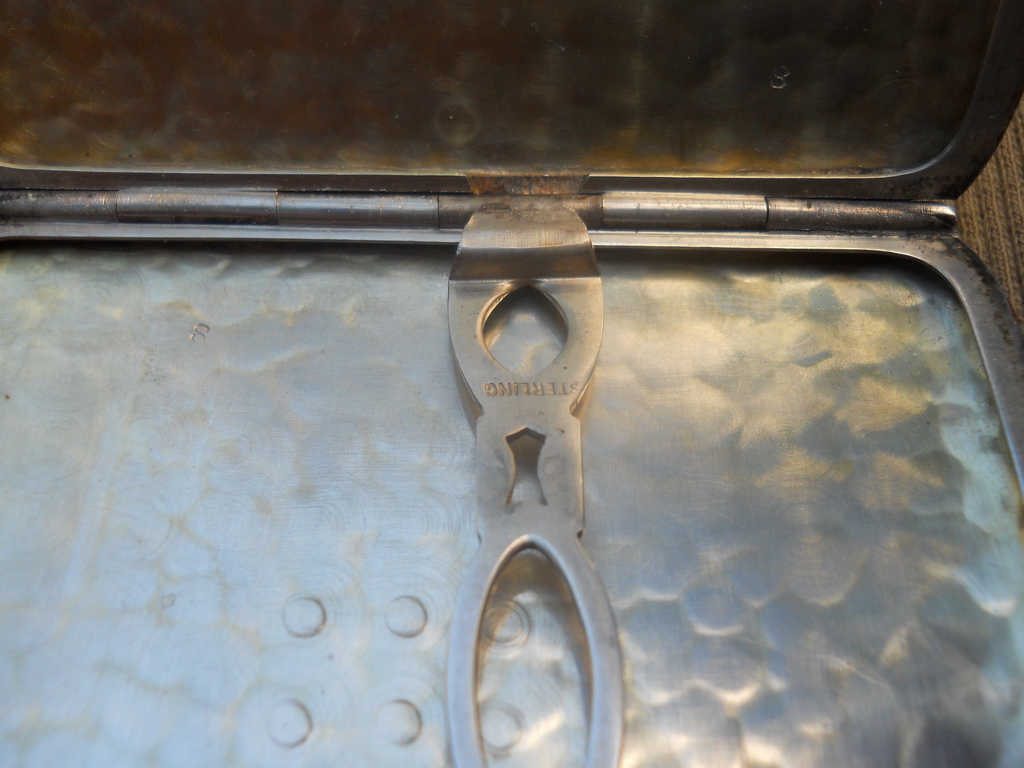