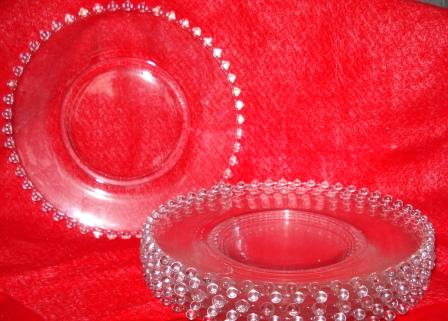 If you desire stunning and exquisite vintage crystal to grace your entertaining events, consider Imperial Candlewick!! Manufactured in Bellaire, Ohio, it’s legacy is among the strongest in the glassware industry.

National Imperial Glass Collectors Society writes about the company Imperial, “For over eighty years, the people of the Imperial Glass Corporation in Bellaire, Ohio produced some of the most elegant hand-crafted glassware this country has known. Highly prized and collected today the popularity of Imperial glassware, then and now, is based on the creative artistry and craftsmanship of those people, the quality of the glass itself and the diversity in the styles of glassware lines offered.”

After the close business failure following the stock market crash of 1929, Imperial was able to post a bond securing the assets and began reorganization, including acquiring a new president Earl Newton, a dynamo salesman from Chicago. You may have heard the story of how Newton met with the Quaker Oats Company and secured a non-exclusive contract for Imperial. To be used as ‘premium items’ in Quaker Oats products, the new line of ‘Cape Cod’ was shipped by trainloads and became the forerunner to make it’s move on the high-end glassware retail market of that day. Competing with established companies like Cambridge, Fostoria and Heisey, Imperial created it’s own wholly owned subsidiary: Crown Glass Manufacturing Company. This venture provided Imperial with the capability of enhancing plain items using etchings, cuttings and decorations.

Thus, while on a visit to New York, Newton acquired a piece of glassware from the French Cannonball line. The piece was set apart by a series of heavy glass ‘balls’ around it’s base. The ‘look’ gave Newton an idea. He could make the glass balls smaller and more delicate and fashion itself on the Colonial-style needlework called ‘candlewicking.’ After patents were applied for and the first series of items were put into production, Imperial’s No. 400 Candlewick was formally introduced at the Wheeling Centennial Celebration, August 1936.

Candlewick soon became the strongest selling item in Imperial’s line-up of glassware. Starting with 40 or so items in the beginning, it grew to over 200 in the 1950’s. These clear and elegant crystal pieces were perfect also for a variety of etchings, cuttings, flashing and even colored pieces.

It wasn’t long before Candlewick became Imperial’s most popular pattern and continued to be so for almost fifty years.

Today, Imperial Candlewick is of premium value with a strong market and numerous collectors. Some pieces are even more rare and beautiful like this 7 3/4 inch Candlewick Card Tray with handle and crystal drop beading around the edge, circa 1936 -. The reference book, Candlewick – The Jewel of Imperial by Wetzel-Tomalka listed this piece for $150- 195. Current online prices range from $125-150, even on eBay. Replacements has it listed for $189.00. 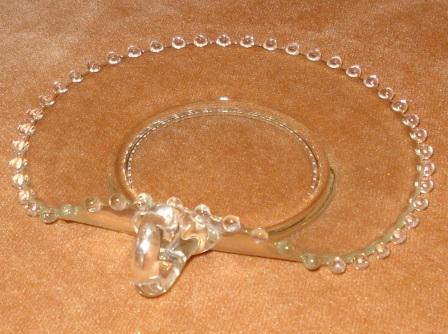 Grandma’s Treasures Online, a store with collectible treasures for everyone, offers eight distinct pieces of Candlewick, with more being listed regularly.

Today, many reproductions are being attempted so beware when purchasing. Several pieces are currently being made by Dalzell-Viking in many colors in this pattern so watch for this, as they may be new.

Candlewick is also confused with the popular Anchor Hocking ‘Boopie’ pattern from the 1950’s. One distinguishing factor is the distance between the crystal beads. Candlewick has a space, Anchor Hocking does not. Often on eBay, you will see the phrase ‘Candlewick Anchor Hocking.’ There is no such thing. They are two very different manufacturers and each had it’s own style.

If you are a collector, I'm sure you have experienced the increased value of your collection. If you are dealer, feel free to share what you have learned about…elegant, vintage, crystal Imperial Candlewick.