(Pittsfield, Mass.) - The vintage clock world was buzzing this past June when a magnificent E. Howard & Co. #61 astronomical floor regulator realized $195,500 at a Spring Clock Auction held by Fontaine's. Lightning struck twice when another example, even nicer than the June clock, gaveled for $189,750 at Fontaine's Fall Clock Auction, held Nov. 8 in at 1485 West Housatonic Street in Pittsfield.
“Most auction houses would have felt blessed to be able to offer one Howard astronomical regulator in their lifetime, and we had two in one year,” enthused John Fontaine of Fontaine's Auction Gallery. “The fact that it was a superior example to the one sold in spring must have made the winning bidder feel pretty special, especially since he paid about $5,000 less. This was truly a great auction.”
About 475 vintage antique clocks – many of them rare, museum-quality pieces – crossed the block at the two-session sale. All but about 25 sold in an auction that grossed over $1 million. Around 200 enthusiastic bidders packed the gallery, while a combined 300 phone and absentee bids were fielded. Online bidding was facilitated through Proxibid, eBayLiveAuctions and Auctionnetwork.com.
The Howard astronomical regulator was by far the top lot of the sale. The case was carved walnut with burled trim. All case parts were original and in excellent condition. The movement had a Graham dead beat escapement with red ruby pallets. The clock had been consigned from only its third owner, with papers dating to its original purchaser, (Edmands & Wiggins, Bangor, Maine, 1874, $800).
The second top lot was also an E. Howard clock – a #60 astronomical hanging regulator that soared to $46,000. The piece featured a 12.5-inch dial, period hands, a highly carved and refinished case, a massive brass movement with jeweled pallets, a Graham dead beat escapement (which had maintaining power and beat seconds) and original cut to cranberry fancy cylinder glass pendulum bob.
Three other clocks topped the $20,000 mark. They were:
• A rare United States Clock Co. astronomical floor clock with regulator “D” style carved walnut case with a bonnet top and figural maiden head in the crest ($37,375). The massive clock stood over 9 feet tall and was made around 1870, in New York City. The case was in excellent condition.
• A 30-day period Beidermeier lantern clock with bold Roman numerals, brass weight and pendulum bob, a period mahogany veneered case and a single band of inlay at the corners ($25,875). The arched panel door featured side panels, and the 9-inch marble dial was signed Happacher & Sons.
• A monumental Brocot French figural three-piece clock set, with heavy gilt bronze case featuring a pair of putti holding filigree on either side of a globe in the center ($20,700). The 5.25-inch porcelain dial was signed A. Brocot & Deletthez and featured a jeweled pallet open escapement.
Additional auction highlights follow. All prices quoted include a 15 percent buyer's premium.
A French figural conical mantle clock, attributed to Farcot & Laurent (Paris, circa 1880), with a 23-inch robed bronze maiden mounted on the top, chimed on time for $19,550. The clock's movement was mounted inside a heavy red marble base. Also, an Austrian astronomical wall regulator with mean and sidereal time, in a period 1840 rosewood case with glazed door and side panels, realized $18,400.
Two clocks brought identical prices of $17,250: an astronomical standing jewelers regulator clock, attributed to Joseph Condliff, with a carved walnut Victorian-style floor standing case; and a French mystery swinging balloon timepiece (circa 1900), with a basket below, carrying the balloonist. Also, a Joseph Jennens inlaid grandfather clock in a documented Tobey case (#944) garnered $16,675.
Remarkably, six clocks all finished at the same price of $14,950. They included a French figural bronze and marble annular clock, featuring two nude women embracing a tall torchier; an E. N. Welch pinwheel jewelers regulator clock with massive 8-foot carved Victorian case in elaborate detail and burled trim; and a Jappy Freres champleve triple-section crystal regulator with relief molded columns.
Also crossing the block at $14,950: a gilt bronze French figural annular mantle clock with a movement signed and dated (Dec. 17, 1879); a French industrial beam engine automated clock with a base made by Albert & JM Anderson Mfg. (Boston) and platform formed from rouge and black marble; and a Tiffany & Company custom grandfather clock (made 1888) with original finish mahogany case.
A Waterbury #69 pinwheel jewelers regulator with a large brass time-only weight-driven dead beat movement and Lyre pendulum made $13,800; an Ithaca Bank Model #2 oak double-dial calendar clock, with a nice oak case and the original upper and lower 12-inch dials, achieved $12,650; and a Gilbert regulator #16 standing jewelers regulator clock with elaborate carved oak case rose to $12,650.
Rounding out the top lots: a massive Ithaca Clock Collector walnut hotel lobby calendar clock with a massive Victorian custom two-part case attained $12,650; a Waterbury #60 pinwheel jewelers regulator clock with an 8-day brass weight-driven movement and dead beat escapement climbed to $10,925; and an E. Howard & Co. Figure 8 weight-driven wall clock with 11.25-inch dial hit $10,350.
Fontaine's Auction Gallery has another clock auction scheduled for the spring of 2009 (time and date to be announced; watch the website for more details, www.fontainesauction.net). The firm will close out 2008 with an Antique Discovery Auction, on Saturday, Dec. 6. The non-cataloged sale will feature around 500 quality lots from several local estates, including many fine antiques. All bidding must be done in person.
Fontaine's is preparing an exciting slate of auctions for the first half of 2009, to include the aforementioned Spring Clock Auction in May. The firm is always accepting quality consignments for future sales. To consign an item, estate or collection, you may call them directly, at (413) 448-8922, or e-mail them at info@fontaineauction.com. To learn more, you may log on to www.fontainesauction.net. 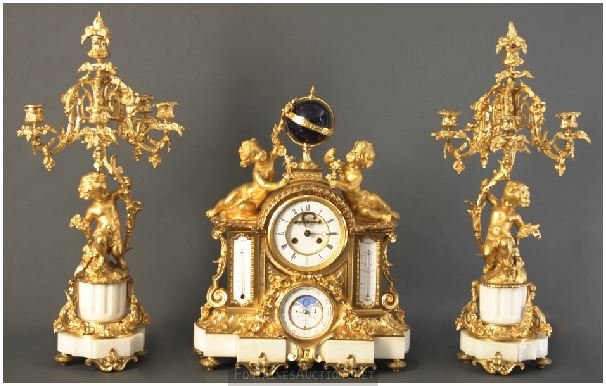