Do you know what stinks about Steiff?

...their skunks!
It is completely understandable that most people just don't have a warm spot in their hearts for these odiferous omnivores. But before you take a black or white stand on these critters, just take a look at these sweet (if not sweetly scented) Steiff skunks. Perhaps these versions ala Steiff may just change your point of view!

First, here's a little history behind these misunderstood mammals. Not surprisingly, skunks are very uncommon in the Steiff line. As a matter of fact, the first skunk didn't appear in the catalog until 1955, 75 years after the company was founded in 1880! (This debut little guy is featured below...) Over time, Steiff has only commercially produced seven skunks. Of these, the most coveted is a 10 or 25 cm standing mohair skunk that was produced from 1962 through 1963 only. His short appearance and limited production puts him on the wish list of most vintage collectors. 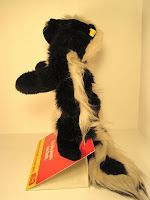 and it to Steiff for producing this first featured item. Here we have Jolly Skunk, a 40 cm hand puppet (or possible pajama bag) that was produced from 1977 through 1983. He is fully washable and was designed for fun and play. Jolly Skunk is unjointed and made from white, black, and grey plush. Like Cosy Skunk, his tail is about as long as his body, and is made from very long black and white plush. Jolly Skunk has black felt lined ears, brown and white pupil eyes, monofilament whiskers, and a little pink nose made from trivera velvet. As a puppet, his body is hollow and his arms, legs, and head can be manipulated and controlled from the inside by the puppeteer. 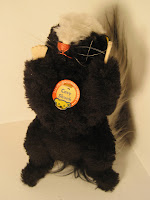 skunky item is called Cosy Skunk. This soft skunk is lying down, unjointed, and made from black and white dralon. He is 22 cm overall; at least half of that is taken up in his long and bushy tail! He has tiny black felt ears, brown and black pupil eyes, monofilament whiskers, and a pink triangular stitched nose and simple mouth. Cosy Skunk has tiny felt claws at the ends of his arms; he has legs but no felt feet. Cosy Skunk reminds Steiffgal of the wonderful prone "sleeping animals" produced during the 1950’s through the 1970’s except his eyes are open! Cosy Skunk was produced from 1969 through 1974. 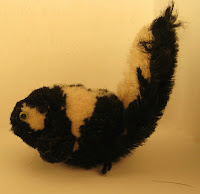 here is Steiff's smallest "stinker" of all, Wool-Skunk or Woolen Skunk. This little love is all of 6 cm, but Steiff has managed to pack alot into a little body. Skunk's body and head are small black and white pom-poms; he also has tiny black pom-pom front arms. His impressive tail is oval shaped and made from white mohair, which has been trimmed, in black mohair. The tail is reinforced with metal wire and is posable. The only other Woolie Steifgal can find with this combination pom-pom body and mohair/wire reinforced tail was a 5 cm squirrel that Steiff produced from 1954 through 1978. 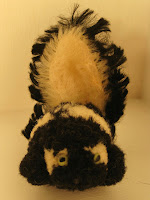 ather detailed and elegant construction, one of the things that makes this little guy so interesting is his tiny, adorable face. It is detailed with bright green and black pupil eyes and an almost invisibly small black button nose (which Steiffgal had not noticed
until today!) As noted above, Wool-Skunk
was featured in the Steiff catalog from 1955 through 1961 and as far as
Steiffgal can tell, was the very first Skunk Steiff ever produced.

Steiffgal hopes all of this talk about Steiff skunks has brought a breath of
fresh air to your viewpoint on these little stinkers.


Have a question about one of your Steiff treasures? Let's talk! Click here to learn more.