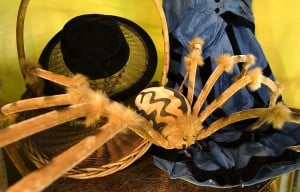 Although Halloween collecting may be popular with some people, it probably will never reach the same status as Christmas decorating.

"It's tough to find Halloween items after Halloween, because for most people, the stuff they buy, they throw away after the holiday," explained Randy Peters, owner of Antiques on Historic Fourth Street, 1016 Fourth St. "It doesn't have the same meaning for them as Christmas heirlooms or items purchased at other times of the years and then put away until the following year."

Halloween really didn't catch on in the United States until the turn of the 20th century. Even then, its focus was primarily on children going out to trick or treat, bringing home their booty and then quickly consuming it.