I found these two lovely antique beaded drawstring purses at a local estate sale. I was told by the seller, that the gray one with the tassel was from around 1917 - 1920s. The other one with the 'Arts and Crafts' type pattern is supposed to be from around the 1900s to the 'teens'.
The patterned one has a cloth lining, with little pockets, probably for lipstick and comb. There are some beads missing on that one.
In what I call the 'Arts and Crafts' style purse, there is also a long piece of the inside lining that has a circular piece at the bottom, which I'm guessing used to hold a little round mirror!
The inside of the gray purse with the tassel is a black crochet. I have paper inside so you can see the pattern. There are (what look to be) celluloid rings for the drawstring to go through.

(Alexander Parkes invented the first plastic, a synthetic replacement for ivory, that he called Parkesine in 1855. It was unveiled at the 1862 Great International Exhibition in London, and later renamed Celluloid.)
(Leo Hendrik Baekeland invented the first viable method for making plastic based on a synthetic polymer, in 1909. He publicly announced his discovery in 1912, after perfecting his work, naming it bakelite. It was originally used for electrical and mechanical parts, finally coming into widespread use in consumer goods in the 1920s. Bakelite was the first true plastic, a purely synthetic material, and the first thermosetting plastic.)
(When the Bakelite patent expired in 1930, the Catalin Corporation acquired the patent and began manufacturing Catalin plastic using a different process that allowed a wider range of coloring.)(Per Wikipedia.)

The Victorian period was from June 1837 (Queen Victoria's coronation) to January 22, 1901 (Queen Victoria's death), and the Edwardian period from 1901 to 1910 (King Edward's reign).
British historians take the Edwardian Period as ending with WW1, and the period after, 1919-1939, is known as the Interwar Years or Interwar Period. (Per Yahoo Answers.)
The gray reticule could possibly be from the flapper era, if the rings pass the bakelite tests, or from the Edwardian period, if the rings are celluloid. 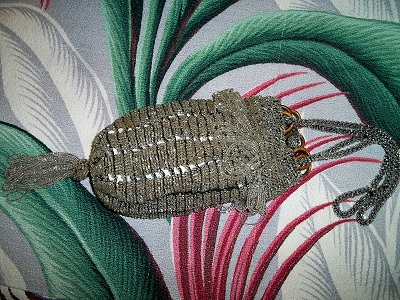 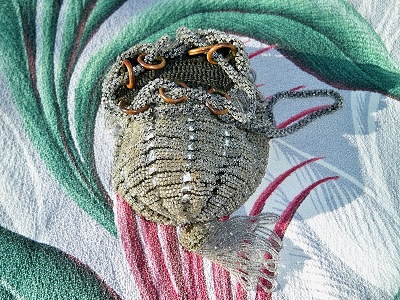 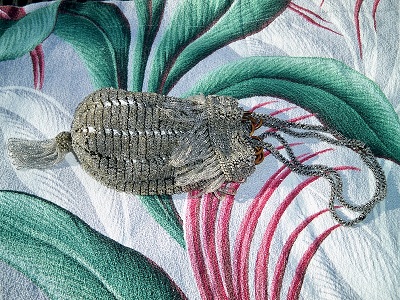 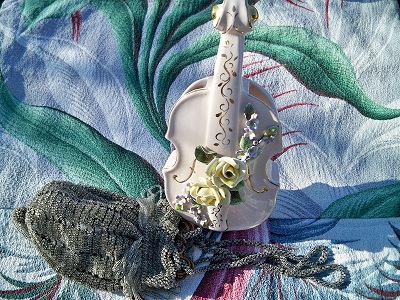 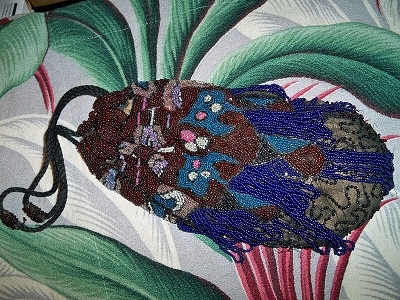 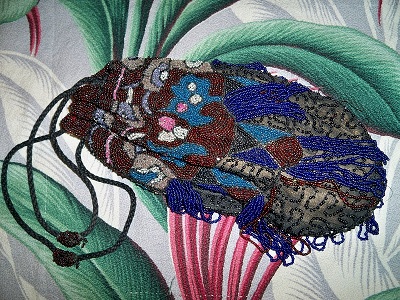 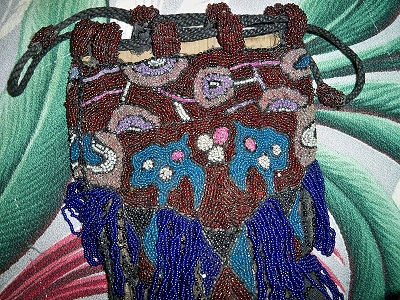 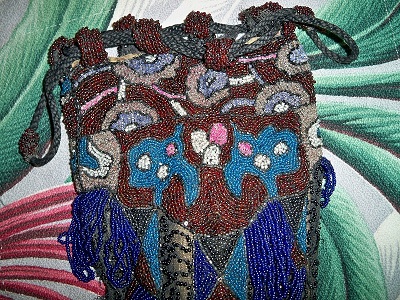 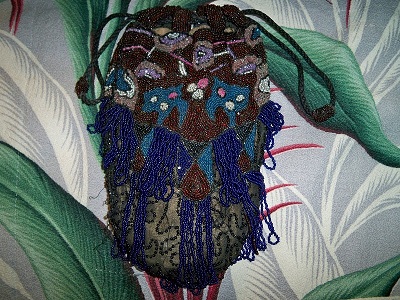 Answer from a antique purse collector:
The first drawstring reticule is Edwardian, in my opinion, 1910 to 1915 at latest. Brass loops used for the drawstring were commonly used during that time.
The second beaded bag is wonderful! again, the drawstring opening is indicative of the Edwardian period. I think the assessment from 1900 to about 1918 would be close.
Both purses look to be in good shape with minimal bead loss. If this is the case I would estimate the larger beaded bag to be around $200. The smaller would be approx. $150-175 depending on the market.

Comment by joni henderson on July 27, 2010 at 10:42pm
Diane, I found a little more information concerning the country of origin, beads, etc. at the following link:
http://www.specialistauctions.com/auctiondetails.php?id=1223920
I still haven't figured out about the necklace and bracelet in my purse. I will keep looking.

Comment by joni henderson on July 27, 2010 at 10:26pm
Hi Diane-
I have measured it again and including the tassel it is actually only 5" long. Also, I'm pretty sure it's a child's set because the bracelet measures 2 inches wide across and the necklace is 9 inches. I too would love to learn more. I have so many treasures I am constantly trying to learn about. It's always exciting to open a new box in the attic. The last one I uncovered had a beautiful hoehner accordion from the 1930's in pristine condintion.
Did you happen to see the fur clip in my photos? I'm pretty sure it's ivory, bakelite and rhinestones. there are no markings but it's a beautiful piece I haven't seen before.

Comment by Luv2LuvAntiques on July 25, 2010 at 4:19am
Joni, I tested a ring on my gray purse, and the brooch I mentioned, with the 409, and they are not bakelite, so they must be celluloid.

Comment by Luv2LuvAntiques on July 24, 2010 at 9:23pm
Hi Joni!
Are you only measuring the purse inself, or have you included the tassel in the measurement?
My gray reticule measures 7" long, with another 3" for the tassel, and has a 7 1/2" handle drop (when held).
The rings on yours look very similar, to the ones on mine. Don't you think your purse could have been an evening bag for a 'flapper', and not a child? They wore alot of beads around their necks...
Anyone out there know more about these antique reticules?
My hubby bought me some 409, so I can test one of the purse rings, and also a brooch that I have, to see if they are bakelite. I'll let you know.

Comment by joni henderson on July 24, 2010 at 8:40pm
Hi Diane-
I tried to get a closer image of the top and the beads. The purse/necklace/bracelet were family pieces. I don't know the age-my house was built in 1927 by my great grandparents and we are the third generation to live in it. I think the purse might have belonged to my grandmother but I can't be certain. It measures about 6 inches-a bit smaller as it is a child's set. Hope that helps a little. 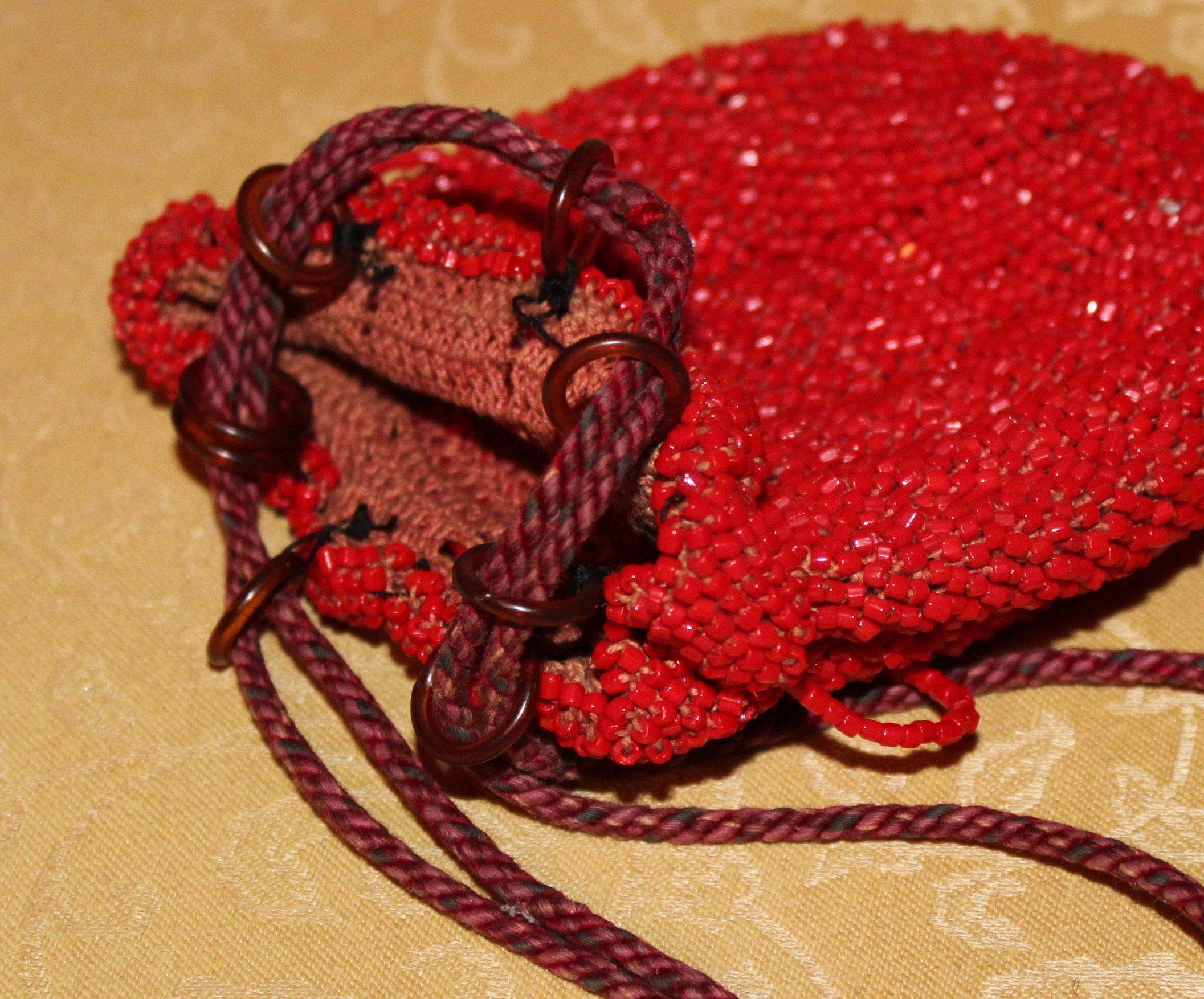 Comment by Luv2LuvAntiques on July 24, 2010 at 4:39am
Hello Joni!
What size is the purse? Do you have any idea of the age of the set? Did it belong to a relative? It is difficult to see the beading of the purse. Do you have a closer photo of the purse? It would be good to see the opening as well, as in my photo second from the top.
Maybe the more knowledgeable vintage / antique purse collectors could help out.

Comment by joni henderson on July 24, 2010 at 12:05am
I was a bit overzealous to share my photo I didn't write a comment. I found this beaded child's purse with the matching bracelet and necklace when cleaning out the attic. I don't know anything about it and thought you might be able to offer some incite. 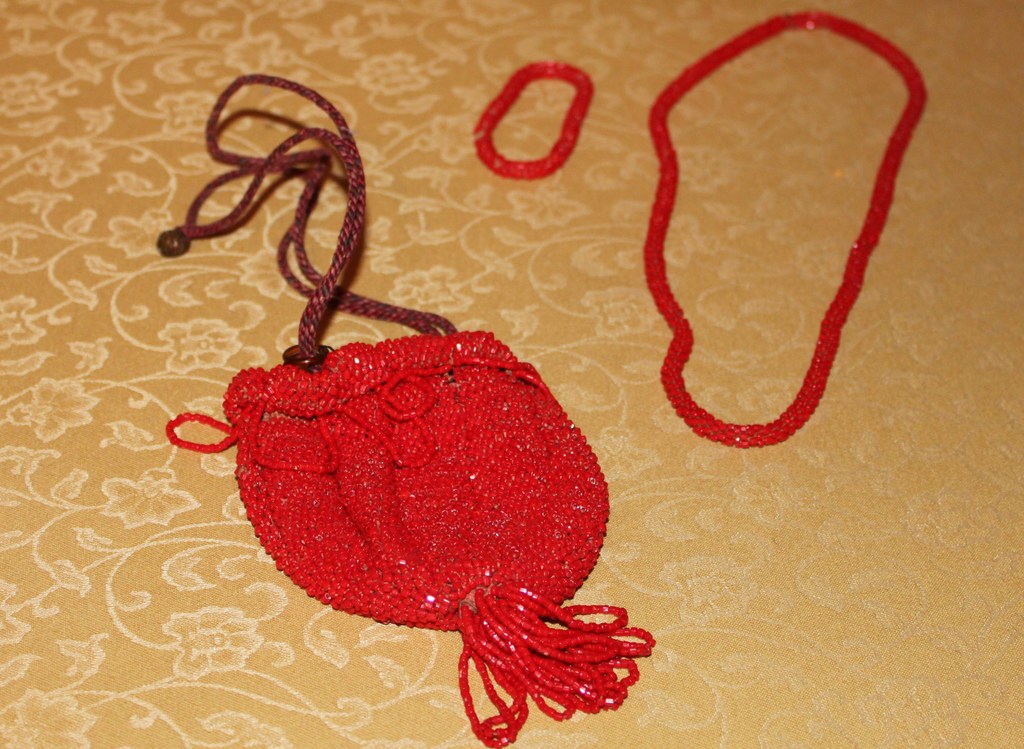