Archangel Antiques, in the East Village, where tightly packed rails of vintage clothing vie for attention with glass cabinets lined with jewelry and curiosities. Yet the first thing most customers notice after descending to the subterranean entrance is Michael Duggan, who can usually be found sitting toward the back of the musty space, peering out from behind a pair of beige, 1950s tortoiseshell glasses. 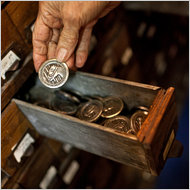 On a recent weekday afternoon, Mr. Duggan, the store manager, was dressed in a pair of bright yellow 1970s tartan golf slacks and an untied mustard yellow bow tie hanging from the open collar of a dress shirt as he recounted his ability to attract attention in even the most challenging environments.

“The other week I was at the Waverly Inn sitting at a table near Puff Daddy and Ivanka Trump,” Mr. Duggan said in a smooth, nasal monotone, “and people kept looking over at me and asking, ‘Who is that guy?’ ”

Mr. Duggan, 52, was telling the story, matter-of-factly, to one of the store’s owners, Gail Busche. Very little about Mr. Duggan seemed to surprise Ms. Busche, 72. Shortly after Archangel Antiques, on Ninth Street near Second Avenue, opened 18 years ago, she asked him to mind the store “for a few days.” Mr. Duggan has been there ever since.

“I tend to collect very different things myself,” said Mr. Duggan, reaching for a clutch of photographs that revealed his dimly lighted one-bedroom apartment — “just off Avenue B” — dominated by an eclectic mix of furniture and art. “Being a collector is why I get inspired to sell to other people,” he said.