My new favorite place to sell and purchase items is Etsy.com they make it so easy and fun.

I have been adding items daily, and my sales are pretty good. http://www.etsy.com/shop/michellesantiques33?ref=pr_shop_more stop by and check out my new online shop.

michellesantiques33 is my seller name on ebay and now on Etsy.

Antiques Trade discussed on NPR's "On Point" with Tom Ashbrook

Disneyland on a Buget

Disneyland on a Budget

A trip to Disneyland is an occasion  that your family will treasure for years to come. Planning is important, but it is obtainable on a budget.  Plan to travel off-season which is January, February, October as well and November and December in between school holiday breaks. Taking your trip on a weekday instead of a weekend will be delightful as it means less crowds and lower prices on…

No End in Sight for TV’s Obsession With Collectibles

No End in Sight for TV’s Obsession With Collectibles

Shows about storage units, pawn shops, auctions and artifacts in your attic continue to explode.

Disney collectibles are both fun and profitable. There is not a single Disney item that I have purchased from Disneyland or vintage collectibles from yard sales that have not retained and even tripled in value. Condition is of extreme importance. I found The Seven Dwarfs from Snow White in full figural form dressed in Christmas attire at a yard sale. They had all of the props and were in pristine condition. They decorate the mantel at my home every year. One of the most wonderful…

Renderings in the Sand

Midcentury-modern beach houses, their jaunty, angled forms clad in weathered cedar siding, have faced tear-down threats for two decades now. The archives of their architects, however, are… Continue

Killer Stuff and Tons of Money

Archangel Antiques, in the East Village, where tightly packed rails of vintage clothing vie for attention with glass cabinets lined with jewelry and curiosities. Yet the first thing most… Continue

Fresh Design for an Antiques Town

For two years, the furniture designer Chris Lehrecke has had a 600-square-foot shop in Hudson, N.Y. Last week he opened a new space, nearly double the size, across the street. “The little store was just a tester,” Mr. Lehrecke explained. “If I put any major pieces of furniture in there,… 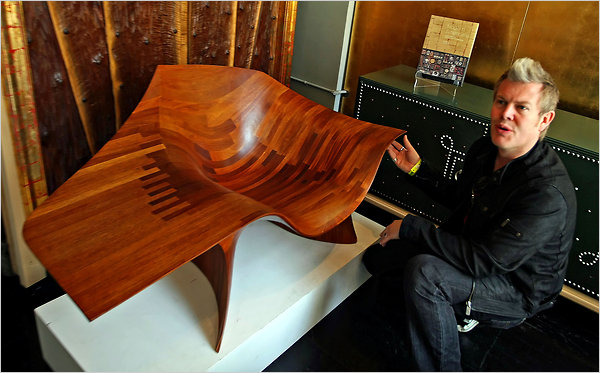 Shape of the Future: Make Your Own Products to Sell with Shapeways

Shape of the Future: Make Your Own Products to Sell with Shapeways


Many online merchants sell products that other people have already made. But a new breed of seller is…

eBay told sellers it would begin charging fees on Shipping & Handling charges starting July 6th - currently the Final Value Fee applies only to the selling price. But what happens beginning in July if customers overpay for shipping when ordering multiple items in one transaction? Will eBay refund FVFs for S&H overcharges…

Family Getaways in CT, Closer Than You Think

Family Getaways in CT, Closer Than You Think

Family. Connecticut has amusing museums and terrific attractions for the entire family. Splash at a waterpark, be thrilled on a rollercoaster and amazed at a science center. Pet a whale. Discover the Titanic. Find a Bengal tiger. Take a ride on a steam train. Zoom along on a zipline. You can even find some quiet time at one of our…

Hello, My name is Janelle and I have just opened my first Antique Mall. We have tons of antique furniture, collectibles, and much more. We are happy to share our 50,000 sq ft mall with everyone. Check out our website to get an idea of what we are doing at Nellie & Nico's. www.nellie-nicos.com

Royal Copenhagen is definitely the porcelain brand in Denmark, who is most famous of all. It is known overlat abroad and has always attracted attention at auctions and in antique shops around the world.

The past 20 years, porcelain series not been very popular here in Denmark, and the prices went right to the bottom. A few years ago you could buy Royal Copenhagen for no money.

So it is partly still, for the small character's case - while the major characters that would… Continue