am enjoying starting to gradually work through all the 'stuff' I have to sort, now I have joined this site! ... was stunned to find the old hunting prints (which I will post soon) that I remembered being small and cute, really well framed and much larger than I remembered when they were hanging up. I have a lot of Victorian furniture that I would love to find out about as well, though I dont want to part with a lot of it. The other day a tenant of mine discovered that a beautiful old 'table'… Continue

My husband Gary has a great site called "Small-Town-Big-War" featuring the nearly 200 letters written by his grandfather during WWI, the "War to End All Wars". That part didn't turn out, but nonetheless the war was fought on the largest scale ever conceived at the time. In the small town where he and many of his fellow soldiers were from, one in six people had enlisted for the war effort. The letters tell the story of a scared but courageous young man from enlistment to triumphant return.… Continue

What is it? It's a Hay Hook 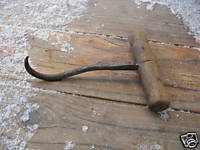 Here is a real nice old Collectible Farm Tool, uses may include Hay, Straw, Meat, Ice etc. etc. The hook is 8" long and the handle is 5 3/4" wide. The metal hook appears to have pounding marks that may have come from the blacksmith or person who shaped it. I have no idea how old it is.These are the types of items we sell at Holly Hill Anriiques. We have several kinds of these and if you are interested we… Continue

I mentioned in my earlier post that I want to one day find a Sunbeam T-1 toaster to add to my collection. I've actually passed on that opportunity a couple of times since I could usually find one for a fairly good price and I'm in no hurry. And then this auction on Ebay ended today.

If that doesn't work, try looking it up with the item number.

I am completely and absolutely overwhelmed at the moment. I have never known much about antiques but these last few years I have acquired rather a lot.....my husband died five years ago and my mother a few months ago. My husband was a hoarder and had loads of my mother and father in laws items when they each died - my father in law a Victorian, born in the late 1880's!

I have been really resistant to dealing with all this but now I need to sell my mothers flat, I have the problem of… Continue

My latest album shows off my Sunbeam mixers and a few other kitchen appliances. I'll be adding more as I go. What's not pictured yet is my toaster collection. I'm a fan of Sunbeam toasters. I like a few others, too, but the Sunbeam models are without a doubt my favorites. I have a beautiful T-9, a T-20, T-35, VT-40 (this is our regular toaster) and a few others. I'm looking to add a T-1 to the collection soon. I've already bought the undertray that it will sit on. I bought that on ebay from… Continue

Collecting cowboys is another sub-niche of Movie Collectibles. You know how you have your collectors who only stockpile Marilyn Monroe items? The same is often true for cowboy collectors. I have one regular customer who buys any movie card I post if the star is shown with a cowboy hat on--whether they're traditionally thought of as a cowboy star or not.

My favorite cowboy collectibles are actually one of the more recent items I regularly handle with a 1973 copyright date, but the… Continue

I've uploaded a few photos that I had of the pieces that are in storage right now. We're doing some work on the house and some of my collection has had to be stored for the moment. These are not the greatest photos since I only took them for identification purposes, but they're what I have until my "stuff" comes home. These are a very small part of my chrome collection - I have Chase, of course, Glo Hill, most of the small appliance makers which would include the toasters, mixers, and blenders.… Continue

I believe it was Queen Victoria that made mourning jewelry so popular. Most ladies in mourning wore black for a certain period of time then they went back to their regular clothing but Queen Victoria never stopped wearing her mourning clothes. She wore black till she died as she… Continue

Big Changes at Back Home Again!

Big changes are on the way here at Back Home Again. I've been working on new inventory that involves vintage tablecloth scraps, fabric stiffener and vintage buttons. Let's just say it will be the Mother's day gift that will last forever. I'll have them added to my shop just in time for Mother's Day. I will be closing shop January 15th for a few weeks while I recover from surgery, clear the isles and… Continue 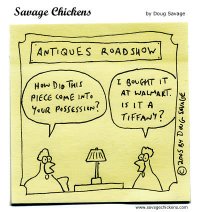 I think it is still ok to wish you all a happy new year. Mine has been rather hectic and busy. I hope to get out and check out some sales soon. I will also try to get some things ready for sale. Hope you gals stay warm.

Have a great weekend.

sorry for the trouble

I have the Aunt Jemima family of oil cloth dolls with painted on features and clothes. They are all stuffed with old cotton batting including Uncle Mose who is 13 inches tall and is wearing a yellow jacket with blue pin stripe pants with a pocket chain attached to a red vest. He's wearing a blue bow tie and holding a black top hat. Aunt Jemima is 12 inches tall and dressed in a red and white checkered apron dress with a white neckerchief.On her head is a yellow bandanna with red crisscross… Continue

Does anyone out there collect or deal in the Dewey pattern Vaseline Glass? I have my personal collection of about 30 seperate pieces and would like to purchase more. Please contact me if you have any to sell. This is really getting hard to find in the midwest.

We have just received several antique instruments. Among them are an 1886 Panganini, and early 19th century violin, a lyon-healy mandolin and a banjolele. We have been unable to find anyone to help us learn more about these beautiful items. Does anyone know who we can contact for help about finding out more about these instruments?

Online Business Have You Feeling Drained?

Does your online business have you feeling drained and unfulfilled? I know mine does sometimes. Check out my blog at Back Home Again for an idea that just might help!

A treasure of old rare coins

When I went to college, I got a new friend who had a passion for collecting rare old coins. I did not know the value of these old coins at that time until he sold a few coins for about one lakh Indian rupees in the late 70's. He earned big money even when he was studying. That drew my attention and I started to collect coins with his help.

He really helped me a lot to collect rare old coins. It was a great fun to collect coins. It became my main hobby. I started to develop a passion… Continue

You can find upcoming coin releases at the United States Mint Website. http://www.usmint.gov. Remember not to confuse coins and commemoratives from the Franklin Mint and other private companies from the real legal tender coins of the US Government.

The United States Mint will issue the 2009 Ultra High Relief Double Eagle Gold Coin. This coin is a throwback to the Augustus… Continue