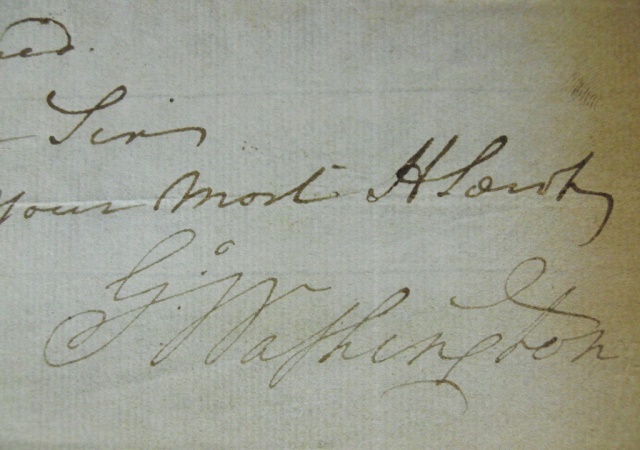 George Washington autographed letter to Dr. Samuel Stringer of Albany, New York, May 15,1776 acknowledging receipt of Dr. Stringer's request for medical supplies. Letter In the hand of Washington’s aide-de-camp Robert H. Harrison, signed by Washington. Ink on paper with clear handwritten signature. Return address area with loss at center where seal would have been affixed.
Handwritten text reads, "General Washington ____N. York. 10th May 1776-" This letter highlights the multiple problems facing General Washington at this time – the condition of American forces in Canada, the perennial lack of supplies, and bickering within the ranks. “Sir, I received your Letter of the 10 Inst [ant] last night by Mr. Bennet, and this morning transmitted to Congress a Copy of it & of the Estimate for their order & direction on the subject of it, so far as relates to the Seniors, mates &c. As to the Medicines, when Doctor Morgan arrives, I shall direct him to send you immediately such a Supply as can be spared. I am Sir, your Most H[umble] Servant. G Washington”
Dr. Samuel Stringer, appointed by Congress as Director of the Hospital in Albany, served in General Philip Shuler’s Army of the Northern Department as Chief Physician and Surgeon. Doctor Robert Morgan, Director General of the Medical Department of the Continental Army, was engaged in an ongoing dispute with Dr. Stringer over his jurisdiction within the Department. Stringer’s request, referred to a Congressional Committee on 16 May, was ultimately declined. Age tone to paper consistent with age. Half and quarter page fold lines. Measures 9" H x 13.75" W. Additionally, a 5 x 4" image of George Washington from engraving by W. Humphreys.
PROVENANCE: Letter was framed under glass, and hung on the wall of a private Concord, Massachusetts residence for generations.