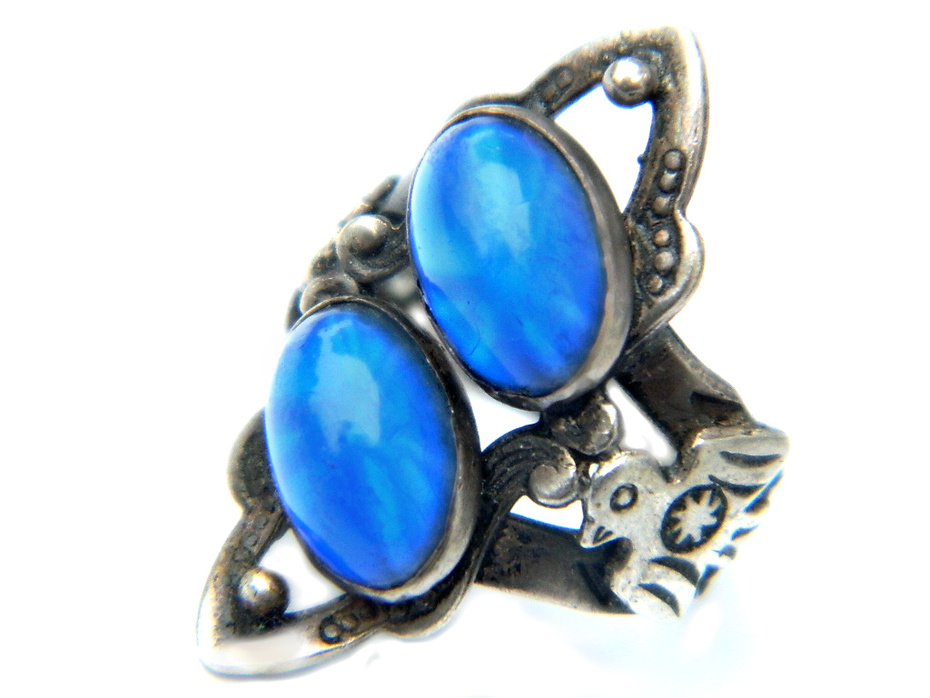 A Remarkable Beauty that is Unique and Electrifying. Glowing Blue Glass Star Sapphires are displayed in Sterling Silver with Detailed Etchings of A Thunderbird on both sides of the Shank. A Rare Fred Harvey Navajo Ring that has it all! Beauty ... In Sterling ... With Blue Star Sapphire Glass ... Etching ... And A Thunderbird! Harvey Era Native American Jewelry at its Finest.

Fred Harvey (1835-1901) was a Trailblazer. As the owner of several restaurants and hotels alongside railroads, he became a leader in promoting tourism of the American Southwest in the late 19th Century.
In 1878, Fred Harvey signed a contract with the Santa Fe Railway (also known as the Atchison, Topeka & Santa Fe) to operate small restaurants at railroad depots along the railroad’s route.
The Fred Harvey Company became a marketplace for Southwestern Jewelry. Indian Arts and Crafts were sold to tourists and The Fred Harvey Era of Native American Jewelry began.
Fred Harvey died in 1901, but his legacy was preserved and carried on.

Minni Harvey, Fred Harvey’s daughter, and Herman Schweizer, a German immigrant, became one of the largest collectors of American Indian Art in the world. Herman’s claim to fame with The Harvey Company came just after he had been appointed in charge of the Coolidge New Mexico eating house on the Santa Fe Railroad. In his spare time, Herman had roamed the Navajo and Hopi reservations in search of trinkets or curios to sell at the Coolidge restaurant. Minni Harvey was aware of the popularity of Herman’s curios at the Coolidge restaurant and encouraged him to expand his curios to other Harvey establishments. With Minni Harvey's urging, the company took on the Indian Curio Trade and established The Fred Harvey Indian Department in 1901. The Fred Harvey Indian Department opened their building at the Alvarado Hotel in Albuquerque, New Mexico.

Herman created The Harvey Style Indian bracelet. He found that the large turquoise nugget bracelet did not find favor with the Victorian traveler. He had the Indian craftsmen reduce the size of the traditional silver pieces to appeal more to the traveling tourist and would better fit eastern dress styles.

The early years of the 1900s was a period of great international expositions. Such opportunity was not lost to Herman Schweizer and The Fred Harvey Company at the 1904 Louisiana Purchase World’s Fair in St. Louis, and the 1915 fairs at San Francisco and San Diego. The company saw the opportunity to promote travel and showcase Indian Crafts of the Southwest. Nampeyo, Maria Martinez, Fred Kobotie, Elle of Ganado were just a few of the Indian artists The Fred Harvey Company promoted at the world’s fairs to millions of Americans.