Can anyone give me more information on this "perfume" bottle? I guess that's what it is. It is 2" diameter and 3" tall, including the stopper. It is cobalt blue and made in Italy. The designed top is porcelain. On all four sides it is indented. A paper in Italian was in the box. Translated it says "In ancient times the ancient art of Neapolitan majolica, wood-fired and hand-painted majolica was handed down by our masters. This product is completely handmade. The irrelevant imperfections that can be found do not diminish its value, but are the testimony of a craftsmanship." Has anyone ever seen one like this and is it Majolica? Thanks in advance. 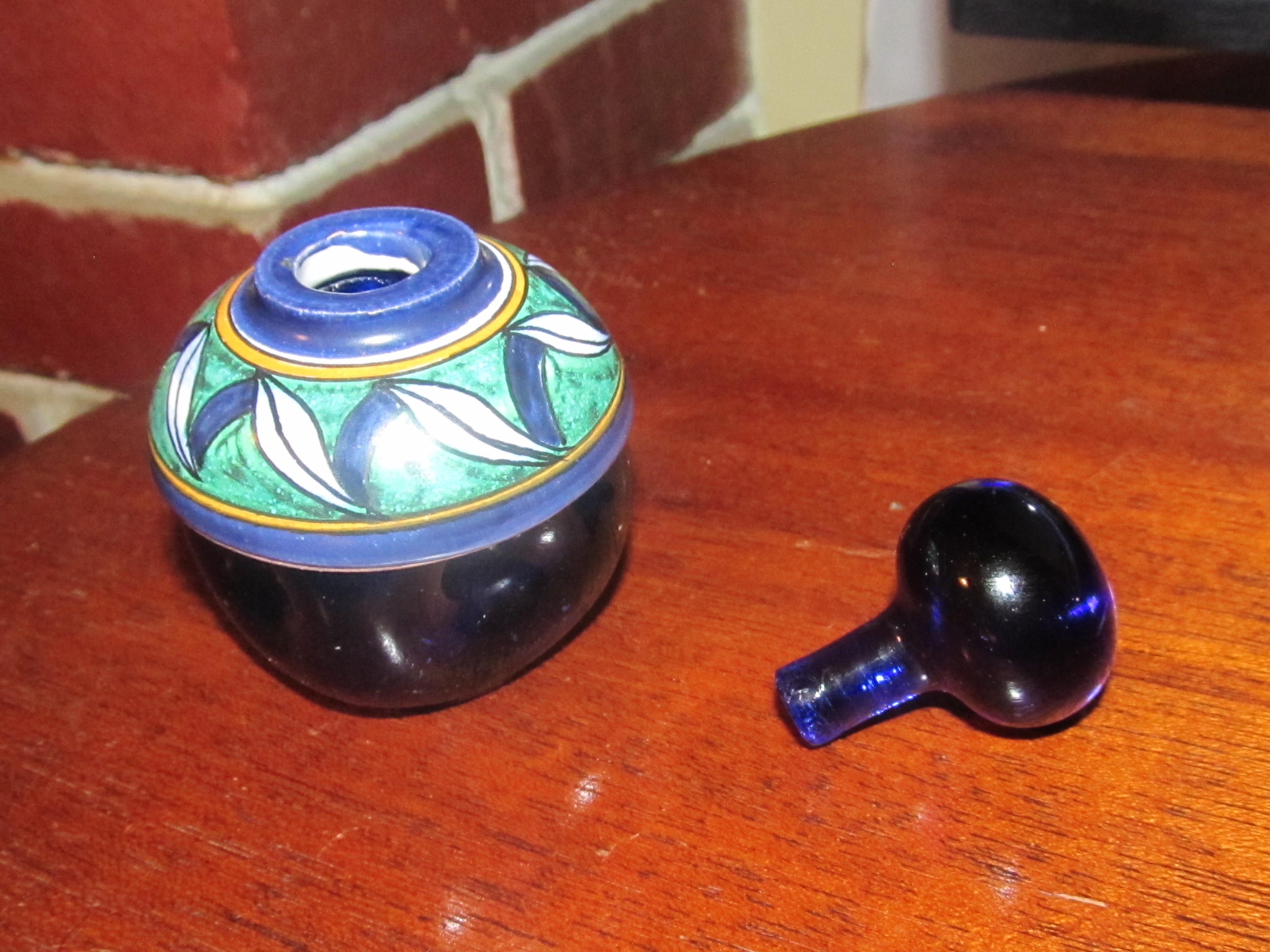 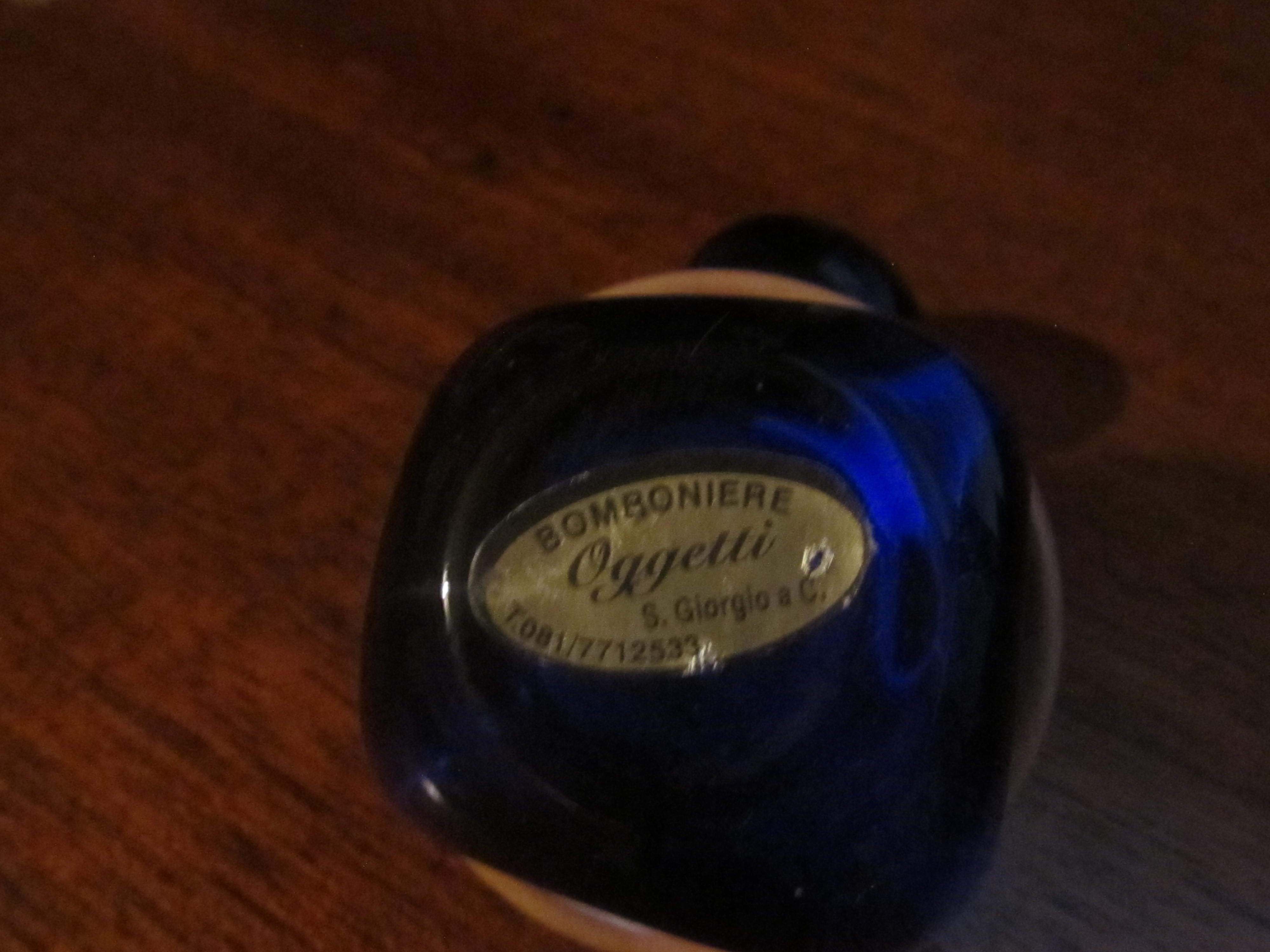 Permalink Reply by tomsantiquesetcetera on September 6, 2019 at 4:19am

I no speaka da Italian...had to translate some words.

Your object is, according to the words on the bottom, a box or gift (bomboniere (It) or bombonbiera (Fr). given to special guests, relatives, friends by the Host or Hostess (Oggetti) at weddings, baptisms, communions, Christenings, etc.

At a wedding it probably was filled with rice to be tossed on the bride, or confettii, or liquor, or some gift. I doubt it was for perfume as most have atomizers and yours does not.

S.Giorgio a C is a church, San Giorgio (Saint George) in Venice, It. Many of these bombonbieres are made by the Murano glass shops and sold locally in Murano or Venice.  Murano is an island in Venice.

The number brings up a window air conditioner...not sure how that works! LOL

Thanks Tom. You've given me a lot of information. I come from an Italian family and have never seen or heard of this. But then again, have never been to Italy where they may do this.  Will have to ask my remaining 95 yr. old aunt if she ever heard of it. Thanks again.

Permalink Reply by tomsantiquesetcetera on September 6, 2019 at 2:47pm

It's easier to ask Google rather than your aunt, but she could shed some light on its use. Here is some historical research I found. It mentions colors, "blue is for boys" which may have something to do with it, or not.

The bomboniere is a traditional keepsake that is given to the guests in appreciation of their attendance to your wedding. The tradition of handing out favors dates back to the Middle Ages when it was customary for the engaged couple's family to exchange favors. Since that time the bomboniere has evolved into an elaborate part of the wedding reception.

The favors can range from something simple like a small porcelain or terra-cotta figurine to something as elaborate as a silver frame or crystal vase. No matter how simple or elaborate the favor is, there is one thing that you will see in every bomboniere. That constant is confetti, which are sugar coated jordan almonds, wrapped in a tulle and either tied to the favor or handed out separately. The confetti represents the bitter-sweet union of marriage. The number of confetti, which is always an odd number & usually five, symbolize fertility, happiness, health, longevity and wealth. Attached to each favor by a piece of ribbon, which can match the color of the bridal party, is a place card with the name of the spouses and their wedding date.

Le bomboniere are not just for weddings. They are also given out at special occasions like baptisms and anniversaries. The confetti come in a variety of colors. White, which is a symbol of purity/virginity, is used for weddings, blue for a boy and pink for a girl are used to announce the birth of a child and silver & gold are used for wedding anniversaries.

Wow, you really did some research! I really appreciate you doing this. In all the weddings, baptisms, etc. in my family, they always had the confetti wrapped in tulle. It brings back a lot of memories. Thanks so much Tom for all the information.