Any info on this old shaker and master salt?

Shaker 4 1/2" h 4" w salt 2h 2 3/4" across. Appears to be yellow pottery. White glaze flow blue hand painted decoration painter directly on the white. The shaker has a metal top that I do not believe was made to be removed. It does have an old cork in the bottom. Has anyone ever seen anything similar to these two pieces? 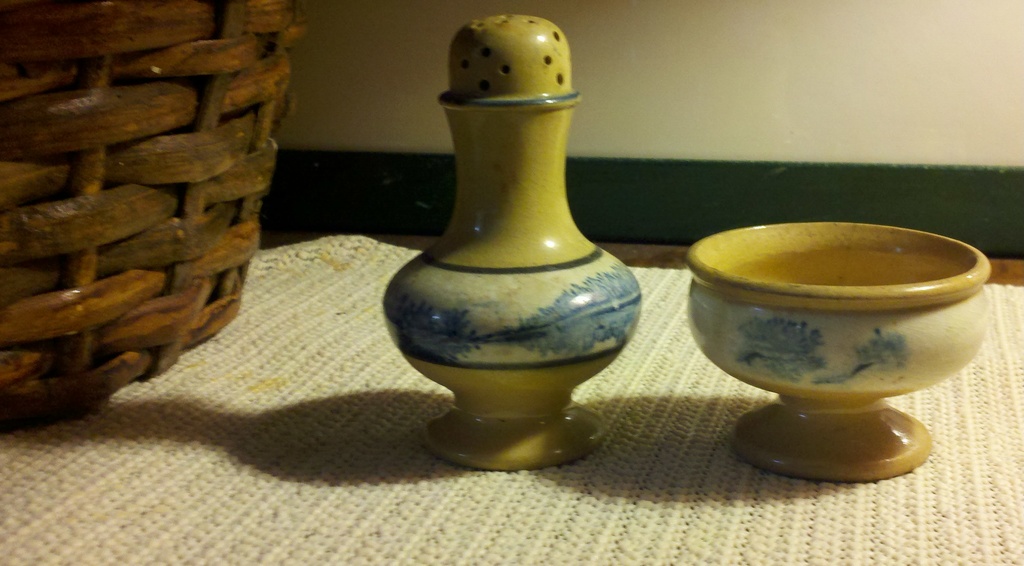 From Wikipedia, the free encyclopedia

Mocha decorated pottery is a type of dipped ware (slip-decorated, lathe-turned, utilitarian earthenware), mocha or mochaware, in addition to colored slip bands on white and buff-colored bodies, is adorned with dendritic (tree-like or branching) markings resembling the natural geological markings on moss agate, known as "mocha stone" in Great Britain in the late 18th century. The stone was imported from Arabia through the port of Mocha (al Mukha in Yemen) from whence came large supplies of coffee. An unknown potter or turner discovered that by dripping a colored acidic solution into wet alkaline slip on a pot body, the color would instantly ramify into the dendritic random markings that fit into the tradition of imitating geological surfaces prevalent in the potteries of that period. The earliest known dated example (1799) is a mug in the collection of the Christchurch Mansion Museum in Ipswich, England. Archival references are known that suggest production began as early as 1792.

Manufactured by potteries throughout Great Britain, France, and North America, mocha was the cheapest decorated ware available. Most British production went to export whereas France and North America manufactured for the home markets. Archaeological finds throughout the eastern United States suggest that mocha was used in taverns and homes, from lowly slave quarters to Thomas Jefferson's Monticello and Poplar Forest. After the mid 19th century, British imports waned, with those potteries still making mocha concentrating on government-stamped capacity-verified measures (jugs and mugs) for use in pubs and markets. North American product was based entirely on yellow or buff-colored bodies banded in black with broad white slip bands on which the dendritic markings appeared. Some British makers used yellow-firing clay, too, but the bulk of the wares were based on white bodies, the earliest being creamware and pearlware, while later, heavier and thicker bodies resembled ironstone, known best to archaeologists simply as "whiteware".

Thank you for showing the pic of the holes.  They look much too wide for ground pepper.  Has anyone ever known of whole peppercorns being sprinkled from a shaker?  I cannot fathom a reason for doing so.  When I looked for "pepper pots" I found some interesting links - but they were not about ceramics.  The few that I found related to ceramics usually showed s/p pairs and did not show the size of the holes.  I would still think that this was for sugar or some other substance that one wanted "a lot of", not something as fine-grained as pepper.  (Just because someone puts up a pic and calls it "x" does not make it "x".)