Cracker Jack: A prize collection that’s a treat for the ages

Cracker Jack: A prize collection that’s a treat for the ages

Cracker Jack is a brand made famous by its “prize inside” marketing tactic and its connection with baseball. Today’s fans appreciate the snack’s rich history and its nostalgic prizes, advertisements and packages.

Frederick (“Fritz”) Rueckheim, a German immigrant, began selling his molasses-coated popcorn out of a cart on the streets of Chicago in 1871. Many of Fritz’s customers were workers who were rebuilding after the Great Chicago Fire. Business was brisk, but small scale and generic.

In 1896, Fritz and his brother Louis, doing business as F.W. Rueckheim & Bro., officially began selling its now-famous candy-coated popcorn and peanut snack: Cracker Jack. The Rueckheims knew they had something special; they trademarked the Cracker Jack name and copyrighted the snack’s slogan: “The More You Eat, The More You Want.” Read More: 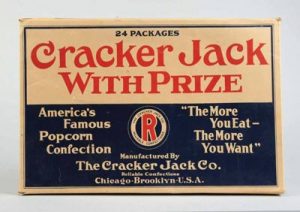