Do You Have a Rare or Unique Item of Ephemera? 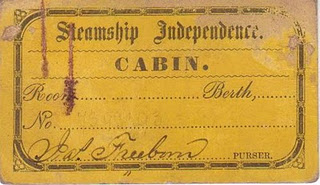 This is a genuine ticket from an ill-fated voyage of the Steamship Independence which went down off the coast of  San Francisco near Magdalen Bay on February 16, 1853. Estimates of up to 240 lives were lost making it one of the worst steamship wrecks in history. One of the victims was a young boy named Asa Watson. Asa's sister, Ella Watson was saved as were several family members. The ticket came down through Ella who married Lance Mizner, the father of Addison and Wilson Mizner. Addison became a famous architect and Wilson a famous playwright. The ticket further came down through Addison Mizner's possession and was tucked away in a progression of papers that told the story of the ship wreck and subsequent years through many voices.