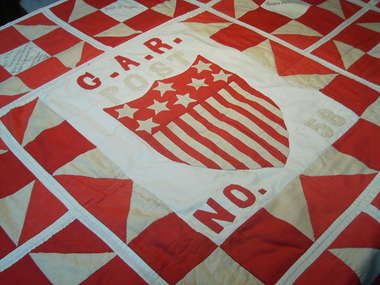 | Peg TwoheyA quilt Peg Twohey turned over to the Bradford Historical Society. You acquire a beat-up quilt at an estate sale for $5.

You later learn that the names inscribed on the fabric are those of Civil War soldiers, and that the quilt itself was made during the 1890s.

Suddenly, you suspect that your find is worth a whole lot more, so you:

A. Place the quilt on eBay and let the bidding war begin.

B. Take it to a pawn shop and haggle until you’ve got enough cash to land that bass boat/jewelry you’ve had your eyes on.

C. Entice some Civil War aficionados to see if they’ll cough up.

D. Give it away. If you chose A or B or C, I’m guessing you’re like most people who realize they’ve got treasure on their hands. But if you chose D, you’re more like Peg Twohey.

Peg could have gone the way of a profiteer, but in her words, “I really didn’t want to.” Instead, she sent it home. It would be more of a chore than she initially imagined, but she was eventually undaunted in her quest to return the quilt to the place where it likely had originated.
Peg purchased the quilt “maybe 35 or even 40 years ago” at an estate sale in St. Joseph. “It was very nice graphically,” she says, “but there was some deterioration.”
She recalls noting at the time how the quilt bore the acronym “GAR,” short for the Grand Army of the Republic, a fraternal order of veterans who had fought for the Union Army during the Civil War. It was founded in 1866, and by 1890 boasted some 400,000 members. It dissolved in the mid-1950s, when its last member died.
Peg recognized the significance of the GAR immediately, but was stymied by the reference to Post No. 58. “I could never figure that out, which state it might have been in,” she says.
So she put the quilt away.

Until recently, that is, when the Grand Rapids Collectors Club, to which she belongs, hosted a program on the Civil War. “I decided it was time.” She took it to the Grand Rapids Public Museum, and staff there – focusing on the name of Cyrus Fisk, a surgeon whose name is on the quilt — traced him to the small town of Bradford, N.H., where he had served as a physician after the war.

Peg started making calls, and connected with Harriet Douglass, director of the Bradford Historical Society, which operates a small museum there.

Peg shared the names of those soldiers who appeared on the quilt, and Harriet started digging. Of 34 names, she found graves in and around Bradford for 21.

Peg was already planning a trip to Boston last month with three friends, and she asked them if they’d be willing to include a detour to Bradford. Of course. Peg and friends were met not only by Harriet, but quilting expert Mary Derry, and a certified quilt appraiser named Gerald Roy.

Peg asked Gerald to perform a formal appraisal. Then she presented the quilt to the Bradford Historical Society and returned home.

I called Harriet on Friday, and she was still in a whirl over Peg’s gift. “I am totally computer illiterate and plan to stay that way,” said Harriet, who’s in her 80s, “but Peg found my name and phone number and we talked back and forth most of the summer.

“We are just so pleased that she was so generous and thoughtful to look up the only name (Cyrus Fisk) that was identifiable, the clue that led her to us. “We are really tickled.” So was Bruce Butgereit, local Civil War preservationist, who has a deep and abiding respect for the conflict that transformed a nation – and its artifacts.

“That is amazing,” he said of Peg’s gift. “Those who put Civil War items on places like eBay are just looking for financial gain. For her to do this, though, means she understands the personal connection … that behind these relics are men who served.”

The quilt is being painstakingly repaired in places where it is feared deterioration might spread. Then, it’s going to be prominently displayed in the Bradford museum, and freely loaned to three nearby cities that have links to names on the quilt — South Newbury, Sutton and Warner — all in Merrimack County, N.H.

I connected with the appraiser as well on Friday, who was just about to phone Peg with the news of what her quilt — well, what used to be her quilt — was worth. Gerald Roy said first of all that “it’s wonderful that it got where it rightly belongs,” and he joined a chorus of others for the trouble Peg went to in honoring long-gone soldiers from a foursome of small towns in New Hampshire. Gerald said the quilt is faded and worn and soiled, but that based on historical value, he considers it worth $3,500, a far cry from the five bucks Peg plunked down decades ago.
“I’m blown away,” said Peg, upon receiving the news, and I asked her if she didn’t have some regret about giving it away.

Bass boat and all. No, she said, and then went on to relate how pleased she was, and of the folks she met in New Hampshire, how “they were just the nicest people.” E-mail Tom Rademacher: rademachertom@gmail.com