We are fans of visionary art, art-brut, art of the insane, prisoner/inmate art, vernacular, low-brow and anything hard to categorize. One piece or an installation. Old or contemporary. Please share.

Expansion of "art" and "artist" groups on I Antique Online 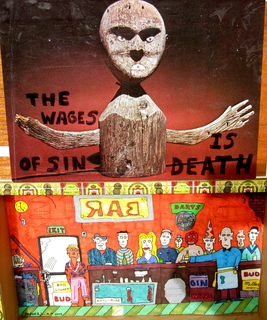 This group is for students of, or artists that create in basically what would be considered the "outsider" genre. Art brut, visionary art, vernacular art, recovery art etc all fall under the heading "outsider" in academia these days.

Hello thanks for letting me join :)

Interview on "Saved By Love Creations"

"Stranger from Another World" The Reverend Howard Finster. Great video and song by Blackhawk with Finster home movies.

Outsider Art and the Problem of Aesthetic Value

You need to be a member of Outsider Art: Definitions, Discussions, Appreciation and Examples to add comments!

I talked to sally,and she will get with you tommorrow,

the freak show gets better the more you know about the behind closed doors :-)

Comment by Parker Lanier on March 16, 2011 at 6:11pm
well I'll be damned....I am from Indy. Moved here for my job about 5 years ago. Love job, love where I live on the lake but the whole Dutch/CRC thing is an absolute freakshow. This is the most bigoted, intolerant, PROVINCIAL place I have ever been in my life. How much are those small studios?

just down the street in Allegan

Comment by Parker Lanier on March 16, 2011 at 5:53pm
I just emailed her. I didnt realize you were in Michigan Craig. I have it all posted. I need a few images of the actual artwork. I will help Sally out any way I can. I hope she contacts me.

I will be busy that weekend shooting pictures, of all the events, we have no idea how large this will be but we have many storefronts/venues available to do this, along with this Allegan is doing a special civil war weekend, 150th anniversary of the start of the civil war. music, ball, cemetery tour of civil war veterns stones, ghost walk, historic church tour, the museum is having a special display of civil war memorbelia,

as she is in charge of the wounded warrior veterans art show.

The Starry Night Studio & Gallery is pleased to announce that it will host the first West Michigan showing of artists associated with the Wounded Artists Project (WAP).

All veterans and currently serving military individuals or groups are encouraged to be a part of this exciting opportunity.  No work is too small or too big to be included.   Artists who are a part of the exhibition will receive public recognition and have the opportunity to network and interact with other military personnel.  In the words of Robert Henri “Through art the mysterious bonds of understanding and of knowledge are established among men.  They are the bonds of great Brotherhood.  Those who are of the Brotherhood know each other, and time and space cannot separate them.”   If you would like to be a part or this exciting opportunity to exhibit with and meet other amazing local and regional artists or have questions, please contact Sally Goins at the Starry Night Studio & Gallery, via email starrynightgallery@gmail.com , phone 269-650-2415; or stop by the studio at 132 Hubbard Street, Allegan Michigan

The Wounded Artist Project (WAP) is an affiliate of the Wounded Warriors Project (WWP) which is a national nonprofit organization dedicated to honoring and empowering wounded men and women of the United Stated Armed Forces.  The WWP provides direct programs and services to meet the unique physical and mental health needs of wounded warriors as they proceed on their road to healing.  The signature program delivers backpacks that include artist’s supplies to the bedsides of the wounded.

The Wounded Artists Project, founded by Ramon Bakerjian - focuses on providing supplies, lessons and experiences for its members and helps them to find the artist that is in everyone.  Art has long been recognized as an effective tool in helping trauma survivors begin the long process of healing.

Terry Shipps, a Michigan artist who currently shows locally and is associated with WAP was deployed in March 2003 with the 101st Airborne Air Assault unit to Iraq in support of Operation Iraqi Freedom.  He served honorably, once completing a mission even after being injured and lost his friend and brother in arms Jason G. Wright on December 8th, 2003.   Upon his return in 2004 he held a variety jobs while seeking help for Post Traumatic Stress Disorder.  During this time he found himself missing the esprit d’corps of unit life.  Terry turned to art and worked with other veterans to create a memorial honoring Michigan soldiers who have made the ultimate sacrifice.  Terry finds that art provides relaxation and therapy for wounded warriors and has art work hanging in the lobby of the Detroit VA Hospital lobby.

The Wounded Warrior Veterans Art Show will feature the art of Terry as well as other local and regional artists.  The show will open on Friday April 15th and end with a closing reception on Saturday April 16th from 6:00pm – 8:00pm. 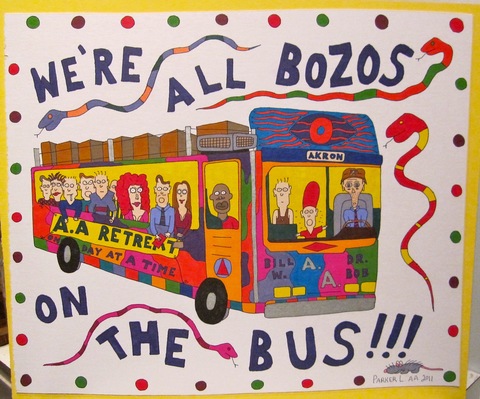 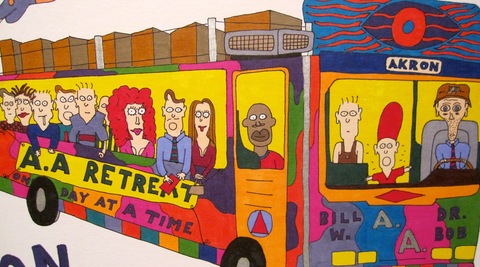 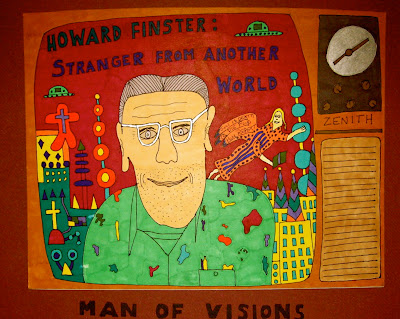