When Desmond Paul Henry Traded His Pen for a Machine

MANCHESTER, ENGLAND — When Desmond Paul Henry, a young philosophy lecturer at the University of Manchester, set off one day in 1951 to browse the local second-hand bookstalls, his family expected him to return with some books. Instead he came back with a strange machine he had found in an army surplus warehouse: one of the Sperry bombsight computers used by British bomber aircraft during World War II to calculate when to release their bombs. 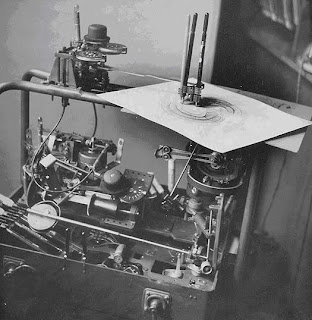 Henry remembered those computers from his wartime service as a technical clerk for the Royal Electrical and Mechanical Engineers, and bought this one for the then-princely sum of £50. For years he enjoyed watching its components in motion, but in the early 1960s he decided to capture their movements on paper and converted it into a drawing machine.

Some of the hundreds of drawings that Henry produced can be seen in a retrospective of his work running through May 7 at the Museum of Science & Industry in Manchester. It reflects the growing interest in the machine-made imagery developed by Henry and fellow pioneers of digital art and design during the 1960s in experimental work with early computers that they customized themselves. 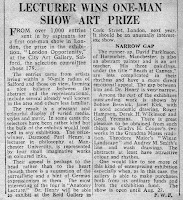 The results are the forerunners of the luscious data visualizations and other complex digital images we see today. Dominated by otherworldly shapes, often surreal in style with seemingly endless variations of curves, these early examples of computer art offered glimpses of the intricate digitally generated forms that now dominate design and architecture, but must have looked extraordinary in the 1960s.

Henry approached his experiments as a “resourceful tinkerer,” as Elaine O’Hanrahan, the youngest of his three daughters and the curator of the MOSI exhibition, put it. Born in the Yorkshire town of Huddersfield in 1921, Henry was a clever boy, who had to leave school at 16 because his parents could not afford to continue his education. His interest in technology was fueled by his wartime role, which involved checking military equipment in and out. After the war, he went to the University of Leeds on an ex-serviceman’s scholarship and was awarded a first-class, or summa cum laude, degree in philosophy. He then became a lecturer at the University of Manchester, and established himself as an authority on medieval philosophy and metaphysics. By his death in 2004, Henry had published several highly regarded books on medieval logic.

When he bought the bombsight computer in 1951, one of Henry’s interests was devising ways of creating images without paint or pencils, mostly by making marks on paper with unorthodox materials, including liquids and creams he found at home and photo chemicals. In 1961, Henry won a local art competition with that work. The prize was an exhibition at the Reid Gallery in London. When one of the judges, the artist L.S. Lowry, visited his home and saw the machine drawings, he encouraged Henry to show them. 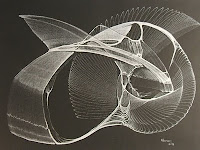 Such images were rare at that time. Computers had been reserved for military use until the 1950s, when they were introduced to scientific laboratories and universities. Many of Henry’s fellow tinkerers were scientists and mathematicians who added mechanical arms to computers to guide pens across the screen or sheets of paper. Like him, they were fascinated to discover what sort of images a machine would produce when left to its own devices. 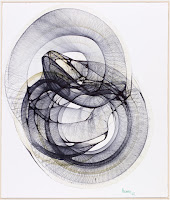 Henry’s chosen machine was analogue, rather than digital. This meant that it could not store data or be pre-programmed, but was controlled by Henry himself, who could intervene at any moment during the drawing process. “My father wasn’t an expert mechanic, and he didn’t create a perfect, precision-controlled machine,” said Ms. O’Hanrahan. “There was always a random element in his drawings, often because of technical errors. He liked the randomness, and was continually learning from the machine. He soon realized that tightening a screw or adjusting the weight could have a great effect on what it produced.” 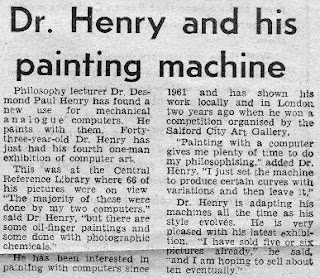 His first drawings were made using ballpoint pens. Then Henry switched to technical tube pens, whose ink was less likely to fade. He used the first drawing machine until 1963, when he recycled some of its components into the second. A third machine was completed in 1967. It took six to eight weeks to build each machine, and up to two days to produce a drawing. Once Henry became accustomed to the process, he would leave the machine running while he concentrated on academic work, or took his daily nap.

“As time went by he left more and more to the machine,” Ms. O’Hanrahan said. “He made tiny hand embellishments on some of the drawings, but they were so subtle that you have to look very carefully to work out where he has highlighted something or accentuated the lines.” 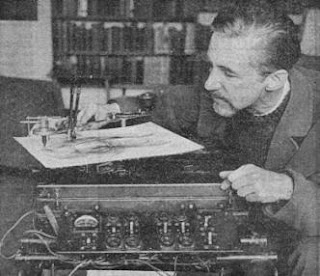 After the Reid Gallery exhibition in 1962, Henry showed his work locally in Manchester, and was then invited to participate in “Cybernetic Serendipity,” a 1968 survey of computer art at the Institute of Contemporary Arts in London. Now seen as one of the most influential British exhibitions of the 1960s, it was a critical and popular success at the ICA, and then toured in the United States. Henry’s contribution was to show his second drawing machine in action.

“My oldest sister remembers that it stood out as looking older and quainter than the other machines, which were much sleeker in nice casings,” Ms. O’Hanrahan said. “Though you couldn’t tell that from the drawings. They looked as though they were produced by a high-tech digital computer.”

When the machine returned from the U.S. tour, it was badly damaged. By then the third machine had also broken. Henry tried to repair them, and later built two other machines, but from the 1970s onward he was increasingly absorbed by his experiments with photo chemicals.

Like much of the work in “Cybernetic Serendipity,” his machine drawings were forgotten until their reappearance at last year’s “Digital Pioneers” exhibition at the Victoria & Albert Museum in London, and now at MOSI. Not bad for a tinkerer.

Permalink Reply by vicki hufstetler on March 5, 2011 at 12:29pm
That is remarkable! I love these articles - they are so interesting! :)