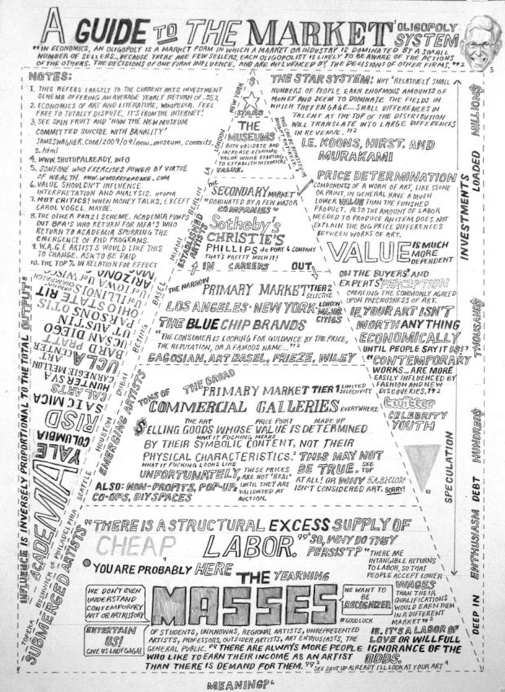 
A couple of months ago, I bought this drawing from New York artist William Powhida. It’s called “A Guide to the Market Oligopoly System”, and it’s lots of fun, as well as being very astute. It’s dominated by a big pyramid, with “the yearning masses” at the bottom — “submerged artists”, “deep in debt”, with enthusiasm rather than money. There’s a little dot over on the left, saying “you are probably here”. Powhida explains the economic condition that most artists find themselves in: There are always more people who like to earn their income as an artist than there is demand for them: there is a structural excess supply of labor. So, why do they persist? It’s a labor of love, or willful ignorance of the odds. At these levels, art-making is simply not an economic activity, and as such it might be the purest art of all. There’s something quite noble about a labor of love, and indeed most artists, galleries, and museums at much higher levels of the pyramid are happy to continue to pretend that the art they’re showing is still a labor of love, even as it sells for millions of dollars. Art is getting bigger and glossier because that’s where the money is, but few artists (Takashi Murakami, perhaps?) will unabashedly admit that they make art for the money. For the most part, then, as you rise up the pyramid, you encounter a steady increase in hypocrisy and artspeak, with the latter largely designed to obfuscate the former. sneer.jpgAt the same time, however, it’s easy to sneer at the labor-of-love types: the art world has internalized the idea that labors of love are only worthwhile so long as they fetch a goodly number of dollars, or at the very least have a veneer of art-school sophistication — a veneer which becomes even more important if your art is popular or decorative or minimally functional. (Elsewhere, Powhida notes that “fashion isn’t considered art. Sorry!”) The next level of the pyramid is what Powhida calls “the broad primary market”, which includes “tons of commercial galleries everywhere” as well as non-profits, pop-ups, co-ops, and the like. This is the point at which art starts being traded for money — the artists in question typically make a three-figure sum selling smallish works, with larger pieces at more respectable galleries going for a few thousand. At this point, both artists and collectors start thinking in terms of what any given piece might be “worth.” Everybody in the system — artist, collector, gallery — has a natural desire to want to believe that an artwork is “worth” more than the collector paid for it, and that the trajectory of the artist’s future career will mean that in years to come, the collector will be able to sell it at a profit.

This is where the collector hypocrisy comes in: collectors love to say that they buy art just because they love it, and that they will never sell it. For them, just as for the artist, it’s important to keep up the pretense that what they’re doing is a labor of love; when collectors are caught flipping artworks to auction houses and making a profit on the deal, they’re sneered at, especially if they don’t immediately reinvest the proceeds in even more art. But the fact is that beyond a relatively modest initial level, no collectors will buy anything unless they think that it has real monetary value now, or will have it in the future. real.jpgThis is why galleries are so important: they’re the mechanism through which an artist’s career can be tracked and reduced to a handy dollar figure. Everybody knows that there’s much more art than science to setting the dollar amount, and that’s why they always keep an eye on the auction houses, which are considered more objective. T 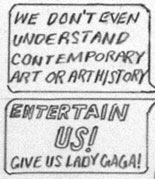 here’s an interesting tension here: galleries and artists love to see new records being set at auction, even as they hate the collectors who take their work to an auction house in the first place. The auction houses are actually two full notches higher up on the pyramid, above the blue-chip galleries in London, LA, and New York and the major art fairs such as Art Basel and Frieze. At these levels, art becomes more explicitly a commodity: virtually everything bought here has some kind of immediate resale value, and you’ll probably be able to borrow cash money against it if you put it up as collateral. Galleries will nearly always buy back the work they sold you, if not at the price they sold it to you for, and much of the work will happily be accepted by the big auction houses. The barriers to entry, at this level, are high: in the primary market, individual artworks start in the five-figure range and go right up into seven figures or even eight for massive works by megastars. Meanwhile, the same dealers operate a highly-exclusive secondary market where works can occasionally break the $100 million mark.

As its position on the pyramid suggests, the auction market is even more exclusive. It’s actually smaller, even as a secondary market, than the behind-the-scenes dealings of gallerists, and it’s also much more brutal in its assessments of an artist’s career trajectory. Auction houses are happy to sell relatively cheap works by up-and-coming artists, but they are much warier of more expensive works by artists seen as being on the decline. There’s still a market, for instance, for 80s superstars like Julian Schnabel or Eric Fischl, but you’re very unlikely to find their work at auction: they’ve been kicked out of the auction world, back down to the primary dealers. It’s worth noting that this mechanism creates a very strong survivorship bias in the

official art-market returns, quoted by Powhida at being 0.55% per year. Those returns are calculated by looking at pieces which have come up for auction more than once, but the fact is that in the big auction houses will often simply refuse to accept pieces which are no longer in favor, with the result that those works end up being sold in the opaque secondary market of galleries, and never get incorporated into official statistics. Auction sales are emphatically not a representative sample of secondary-market art sales more generally. What’s more, most art collections are built up in the primary market rather than the secondary market, and art indices give no indication of the rate of return on primary-market purchases, again because those numbers are so opaque. Most people who buy art will, to a first approximation, “lose” all their money: like most other consumer products, it won’t or can’t be resold after being bought. Many of those people kid themselves that their work is “worth” roughly what it would cost them to replace it; they’re only disillusioned when they actually try to sell the thing and find no willing buyers. And even the clear-eyed often think of their art as a lottery ticket: it might be worthless today, but maybe, in the future, if the artist becomes hugely successful, it could be worth a fortune. Art only really becomes an asset class at the very top of the pyramid: the auction houses, the museums, and the stars (a/k/a Damien Murakoons).


Artists are constantly if slowly being inducted into this world, and museums are constantly receiving donations of art and buying it themselves, thereby taking it off the market. As a result, the total size of the market remains roughly constant, even the art which makes up the asset class is constantly changing. Right now, you’ll find Richard Prince and Francis Bacon in high demand; in ten years’ time it’ll be someone else. One of the things I like the most about Powhida’s piece is the various different ways that he characterizes what you might think of as the y-axis: the thing that changes as you go higher up the pyramid. One sequence looks at the artists, who go from “submerged” to “emerging” to “established” to “stars.” Another looks at the artists’ net worth, which goes from “deep in debt” to “loaded.” Then of course there’s the price of art: “hundred$” to “thousand$” to “million$.” There’s a line characterizing the art from the collector’s point of view, from “speculation” to “investment.” There’s an upside-down pyramid, showing the art world in terms of effect rather than mass. And then there’s this:


You can argue the toss on some of these, but the main thrust is clear: the value of a work of art is to a very large degree a function of the city where it’s being sold. New York’s at the top of the heap (or, to be precise, Manhattan); Berlin punches well above its weight; Paris, the erstwhile center of the art world, is conspicuous by its absence. Art schools, too, are ranked: Yale’s at the top, followed by Columbia, RISD, the Art Institute of Chicago, MICA, Cal Arts, UCLA, Bard, and Pratt. No foreign art schools are on the list, which is a shame, but Powhida is a very American artist. In any case, I love this particular piece — I’m geeky enough to think that there should be much more art with footnotes — and I’m glad to own it. Naturally, I’ll never sell it. But I can still dream of a day when Powhida is famous and it’s worth a fortune.