I have two pieces of glass I am trying to identify, fully.  I believe the blue piece to be Three Panel Thousand Eye.  The clear piece, I am not sure.

I see two elements of the designs that are similar.  One is the 'zippered/sawtooth'? pattern between panels.  The second is the magnifying glass effect by the panels between the Z/ST vertical lines.

No markings.  Naked eye or loupe.  Unless they cleverly hid the marking in an air bubble.  I'm going to reword a few things for accuracy and to use my new words.  No more semantics.

My neighbor doesn't think it's EAPG.  He can't say why he doesn't.  My only argument is the 'sun tint'.

The 'etching' is wheel cut, machine done.  Another thought it was old stock picked up by someone with a wheel glass cutter thingy.

Is it crystal?  I'm saying no.  It seems light.  the 'ting' doesn't seem quite heavy enough.

It is most certainly NOT EAPG - Trust me on that one! I do not believe it to be American either. I've been liquidating estates for nearly 20 years, and I'ma tellin ya, that IS crystal! If you have any sort of "Ting" - that's all you need! LOL

What does the neighbor say, exactly? I believe it to be either European or Eastern European (Czech). It's very hard to date it, because this type of ware has been done since the 1930's or so. Sorta like a "needle in a haystack" situation, if you follow? The ONLY exception I might grant ya, is if it were made by Steuben  - out of Steuben OH. http://www.steuben.com/ That would make lots of sense! :)

I'm moving this to the thread started for the plate...

If anyone is still watching this, The second pattern, the clear glass, is 'Notched Panel' by Tarentum Glass in 1902.

I found this pattern in a picture directly across from another piece I had just found!  I love it when a search comes together.

That is great! I love it when that happens! Especially if it's been a particularly difficult one to find!

Thank you for the update!

Hi and a Happy Belated Mothers Day to all!

My "object de Art" above and up till now a mystery to me!

So, I learned something interesting, and I wanted to share with our Glass Hounds. I've owned this really pretty, pressed glass thing (see above) that resembles a Window Box. It's impressed with several butterflies on a white frosted ground, with a machined, or fire polished base.

It has the looks of something French to me, but the quality, somehow just wasn't there. So this pretty thing has been bouncing around my office for at least 6-7 years because I didn't take the time to figure it out. I finally did!

Heisey-Veryls Glass and Verlys America! Who knew these terms? I've never heard of either one in 30 plus years of glass-hounding!

It turns out that the very beautiful Verlys France Glass that is known for it's beautiful designs and the blue/white opalescent in it's glass, that's only rivaled by Sabino imho anyways, did indeed make glass in the USA under the name Veryls America in the 1950's. They only offered some of their famous patterns. 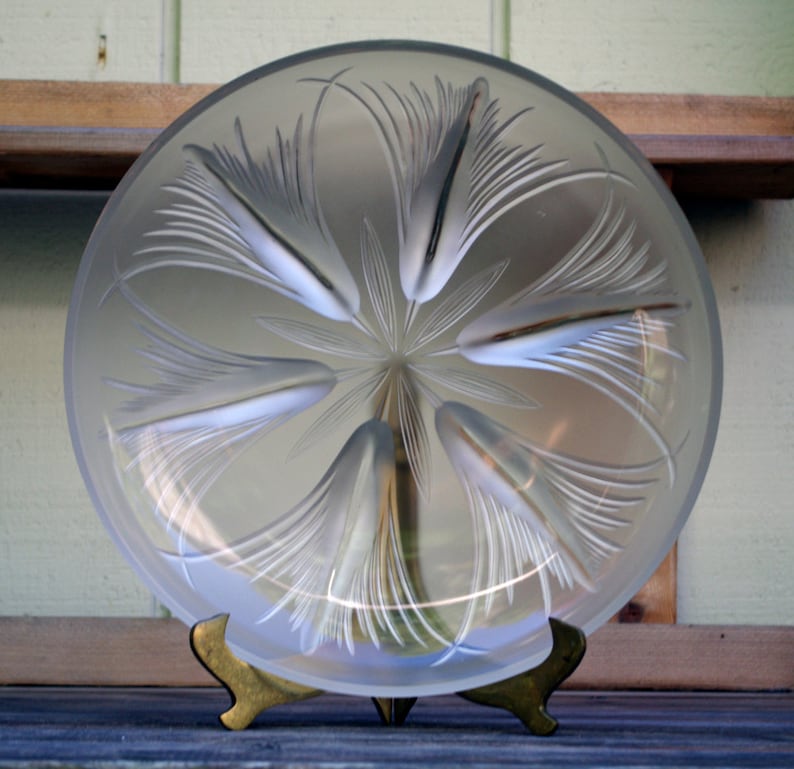 Example of Veryls America Glass Sold in USA in the 1950's.

In 1955 Heisey - one of the best makers of USA Elegant glass did "lease" several molds from Verlys. Again it was very limited production, and I understand limited molds as well. In 1957 these molds were returned to Verlys and the Veryls America was closed not long afterward. Then (There's more to this story!)

After the dissolution of the Veryls America factory, Fenton - one of our Favorite American Glass makers did Purchase some ( or most - not clear on that point?) of the molds that had been used either by Heisey and or by Veryls America. (Neither of these points were very clear in what I've found so far) Anyways, Once Fenton owned some of these amazing molds they went Full Tilt Fenton - and did them in Amazing Fenton colors!

How bout that? Did any of you already know about this? And if so why didn't you tell me? LOL In any case, if you didn't know before, now you do! Keep your eyes pealed when out in the wild folks, you might stumble upon one of these beauties! Oh, PS  - I'm pretty sure most of these designs are not marked. Mine isn't, I might have discovered it's origins much sooner, if it had been!