Zabars: A Lifetime Amid the Lox and Rugelach

Zabars: A Lifetime Amid the Lox and Rugelach

By TINA KELLEY
Nowadays, most tales of longstanding and beloved family businesses in New York seem to end with a sniff and a 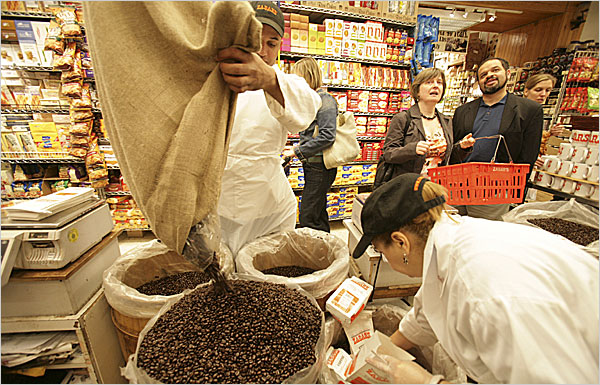 final mop of the floor. But as Zabar’s, the venerable West Side purveyor of New York noshes, approaches its 75th anniversary next year, it is flourishing and still very much in the family. Overseeing aisles of smoked fish, a United Nations worth of cheeses, and the iconic coffee and rugelach is the firm’s president, Saul Zabar, who will celebrate the 75th anniversary of his 5th birthday next week.

Mr. Zabar says that he does not remember the grand opening of the original Zabar’s but does remember his own role in the early days: As a lookout posted on Broadway because of the Blue Laws, when stores were ordered to — but did not always — close from 11 a.m. to 4 p.m. on Sundays.

“I was supposed to notify my family if the police were coming,” he recalled. “But when I saw a policeman I could not make myself run. I walked right back to the store, and the policeman followed right afterwards.” His father, Louis, was not pleased, and frequently reminded him of the incident until his death in 1950.

I shouldn't have passed by the Zabar's mug I saw last week. Maybe is it still there?!