as founded by a Polish immigrant, Nathan Handwerker, and his is truly an authe

ntic “only in Americ 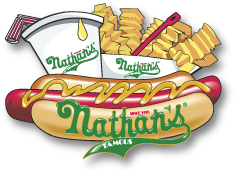 a story.” He started his business in 1916 with a small hot dog stand in Coney Island, New York. He sold hot dogs that were manufactured ba

sed on a recipe

Nathan’s popularity was almost instantaneous, and in its earliest days had legendary characters such as Al Capone, Eddie Cantor, Jimmy Durante, and Cary Grant as regular customers. It gained its first international exposure when President Franklin Delano Roosevelt served Nathan’s Famous hot dogs to the King and Queen of England in 1939. Later, Roosevelt had Nathan’s hot dogs sent to Yalta when he met with Winston Churchill and Joseph Stalin. Years later, Nelson Rockefeller, Governor of New York, stated th

at, “No man can hope to be elected in his state without being photographed eating a hot dog at Nathan’s Famous.

Politicians, show-business personalities, and sports celebrities are often seen and photographed munching Nathan’s dogs, and heard singing its praises. Barbra Streisand, actually had Nathan’s hot dogs delivered to London, England for a private party. A trip to Nathan’s was the focus of a Seinfeld episode created by comedian Jerry Seinfeld. More recently, the ex-mayor of New York City Rudy Giuliani declared Nathan’s the “World’s best hot dog.” Shortly after that, Nathan Handwerker was named to the city’s top 100- joining the ranks of Joe Namath, Irving Berlin, Andrew Carnegie, Joe DiMaggio and others. Even Jacqueline Kennedy loved Nathan’s dogs, and served them at the White House. In his final last will and testament, actor Walter Mathau requested Nathan’s hot dogs to be served at his funeral – they were! The point is Nathan’s is not just a hot dog, it has history and it is Americana!

Last year there were over 425 million Nathan’s Famous Hot Dogs sold! Today, Nathan’s is sold and enjoyed in all 50 States and sold at over 40,000 food service and retail outlets.