I recently acquired an Original Pencil sketch by this famous artist. The sketch has never been copyrighted or put into print. It measures 14.75 wide by 9.5 inches high. Unframed. It is glued to a #300 Crescent Illustration board. Not dated. It is titled:  "Parade for Running for the Roses." Picture below.  I would like to sell it if you have any horse, racing or Kentucky Derby collectors.  Brown's sketches range in value from $3,000 to $13,000. according to my research. 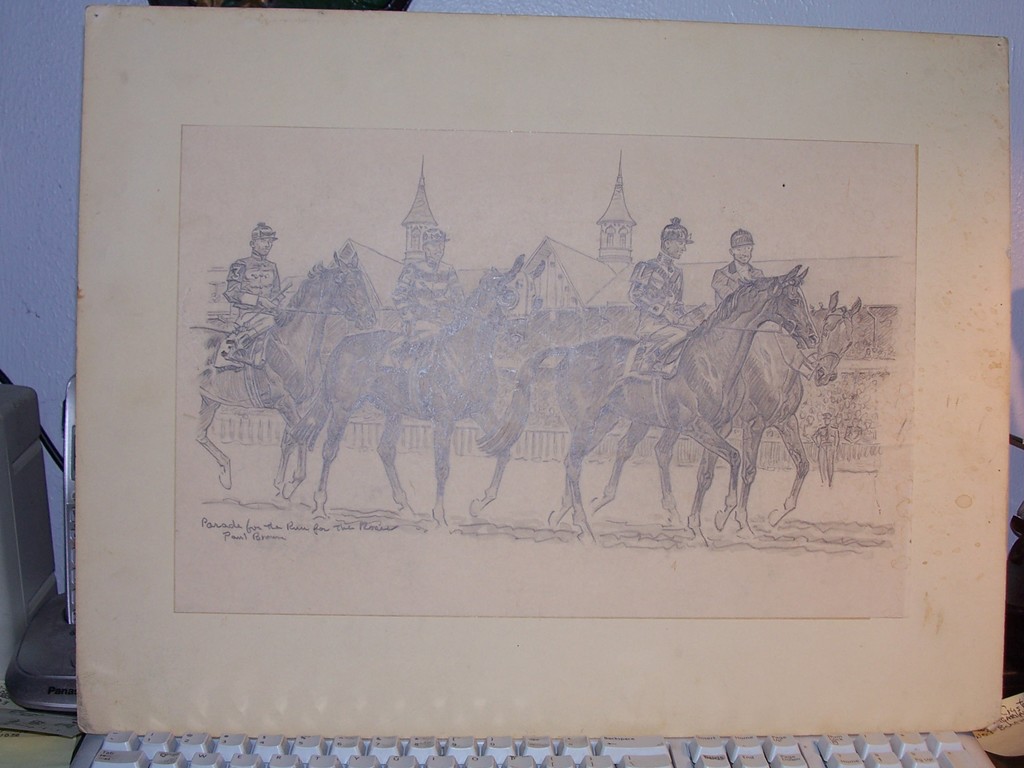 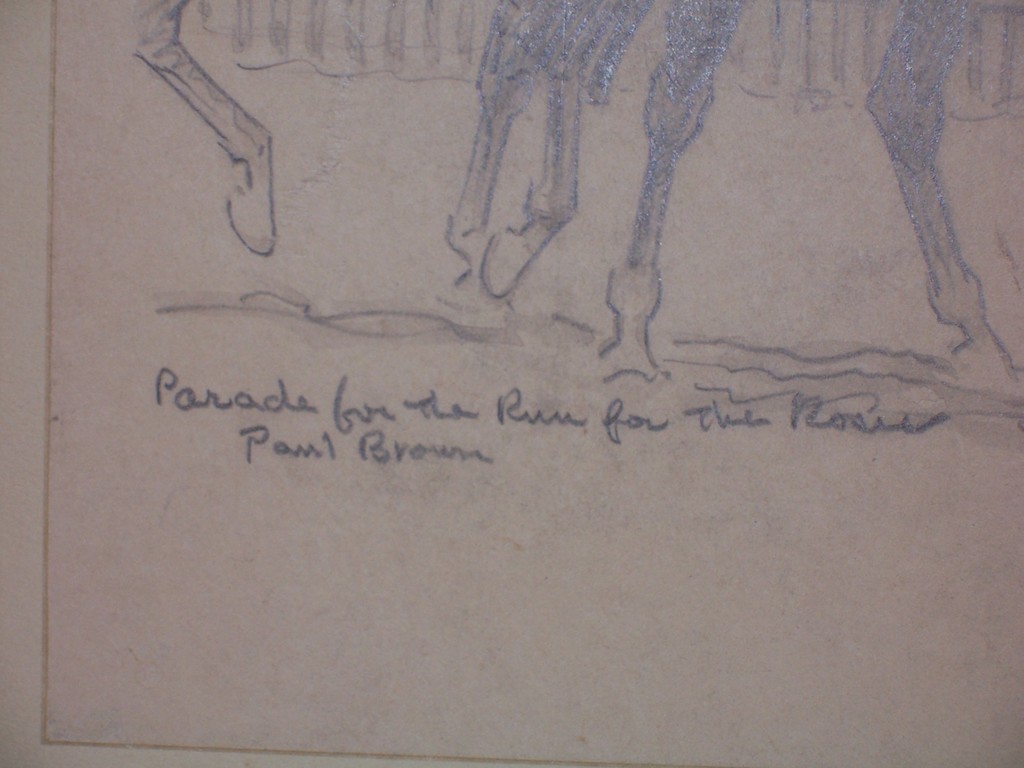 Tom - If indeed it is original and even though the photos are blurred, I really believe it is and having spent a great many times in Derby land, you might want to contact one of the better auction houses. While Brown's more premium work used bits of color, this might have been a preliminary for another well known work. He usually blends out the detail and focuses on the rider(s) and the horse(es) so this one would be considered rare/scarce. I have a special lens that allows me to see bleed lines which I used in one of my former paid lives that comes in handy with identifying paper etc.

(you never seize to amaze me with your finds.)

Permalink Reply by tomsantiquesetcetera on July 3, 2011 at 3:19pm

Ptg #2:  Oil on 8x10" portrait board of un-named sail boat (actually it's a schooner) under sail in San Francisco Bay. In research I believe she is the racing schooner, "Chispa" who won the first race, "Commodore Hanify Cup" held by SF Yacht Club in 7-11-1910. Not signed, or dated.  Also framed in an old gesso frame, badly chipped.  I sent an e-m to SFYC but they have no yet responded.

Ptg #4: Lithographic print, appeared in a newspaper or magazine and was cut out and glued to a backer-board, colorized.  What I thought was a dismal, gray-colored sky turned out to be the backside of a newspaper article and the gray coloration are actually the words from the front side showing through the thin news(print) paper.

On the bottom it reads: "California--The Bennett Expedition to the Polar Regions--Departure of the Arctic Steamer, "Jeannette" escorted by the fleet of the San Francisco Yacht Club, From San Francisco, July 8th, 1879.--From a sketch by our Special Artist."

Notes:  The Jeannette was a 3-masted clipper with a steam engine. She was a US Navy ship. She was crushed by ice and sank off Siberia.  Two thirds of her crew was lost. There are numerous other ships and boats seeing her off. 4 large ocean-going side wheeler steam boats, 6 cutters, 3 schooners, 15 sloops, 1 pram, and 6 steam tug boats, one of which is pulling a sailboat. US Army fort on Alcatraz Island in background.

There are quite a few prints and paintings of this historic event. One painting shows Alcatraz in background, same flag, same buildings, same mountain sky line. It is signed by H.A. Ogden, who obviously painted my work as well. H.A. is Henry Alexander Ogden (1856-1936). 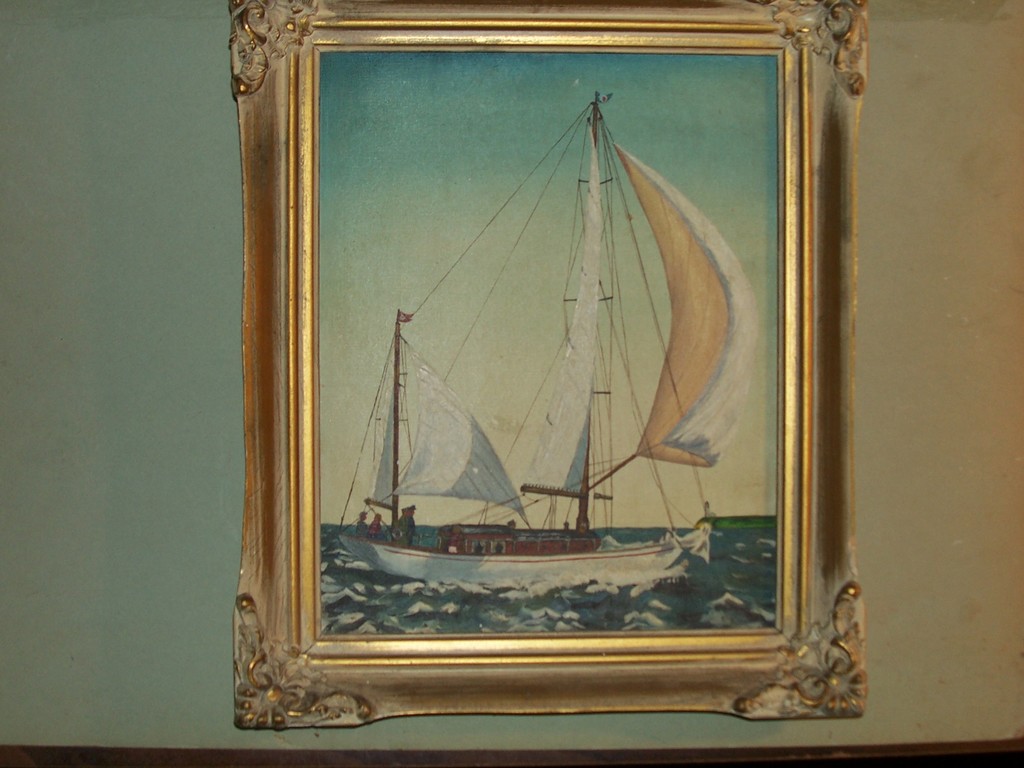 Permalink Reply by tomsantiquesetcetera on September 28, 2016 at 1:11pm

UPDATE: In describing the litho print I said the MANSION HOUSE was in California. It was in New York State. It was frequented by Mr. Gordon Bennett Jr. who was a multi-millionaire playboy, owner of a NYC newspaper and sponsor to the ill-fated "Bennett Expedition". Fortunately, Bennett did not go with them.

The sailboat oil painting is not the Chispa.  I believe it's a US government boat used to chart oceanic currents, depths, and atmospheric conditions.

Make me an offer if anybody is interested. Lots of wiggle room for re-sellers!

Permalink Reply by vicki hufstetler on July 4, 2011 at 6:31pm
WOW Tom, Cograts to you! Looks like you really found some tresures there!

Permalink Reply by tomsantiquesetcetera on September 8, 2011 at 11:32am

9-7-11:  The Paul Brown Horse Racing sketch has been sold and is no longer available.