Okay, who is the resident expert on this board? I have a unusual bowl type thingy that I have had for many years but I never could find out anything about it. It is the color of Pink depression glass but is hand blown with a ground pontil on each piece. This is a three tere bowl. Each piece fits very well into the lower piece and each piece has a hollow base that would hold water or a liquid. Why that is I don't know. I was hoping someone here could help. With a ground pontil, means it is more then likely from Europe. I will try to post some pictures of it now. Thanks a bunch. 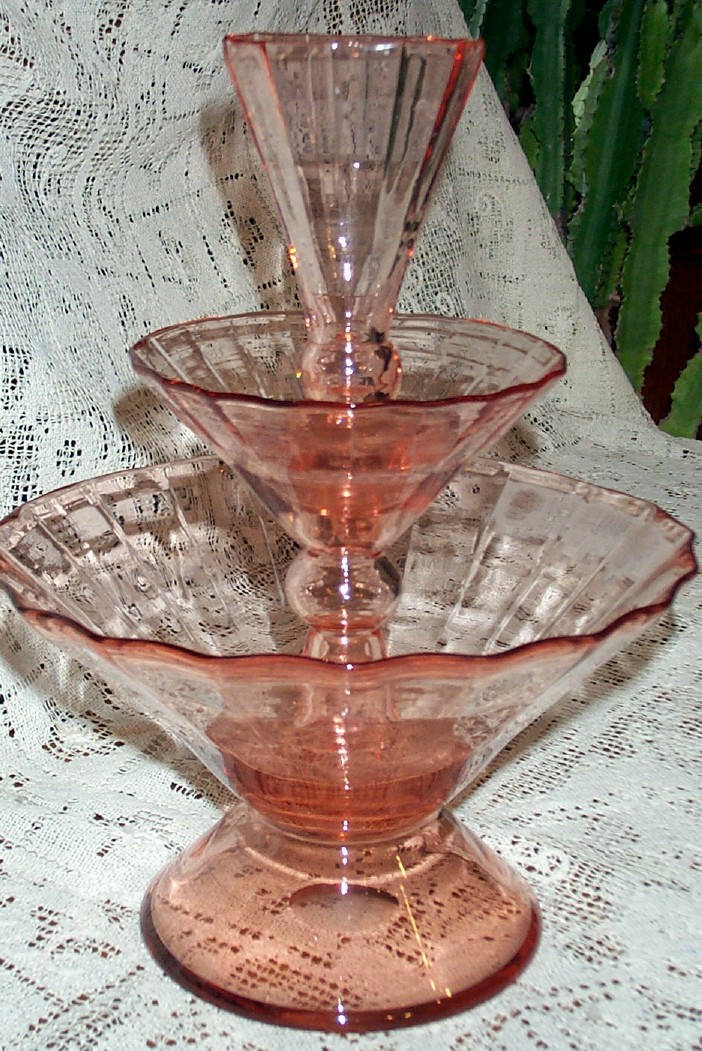 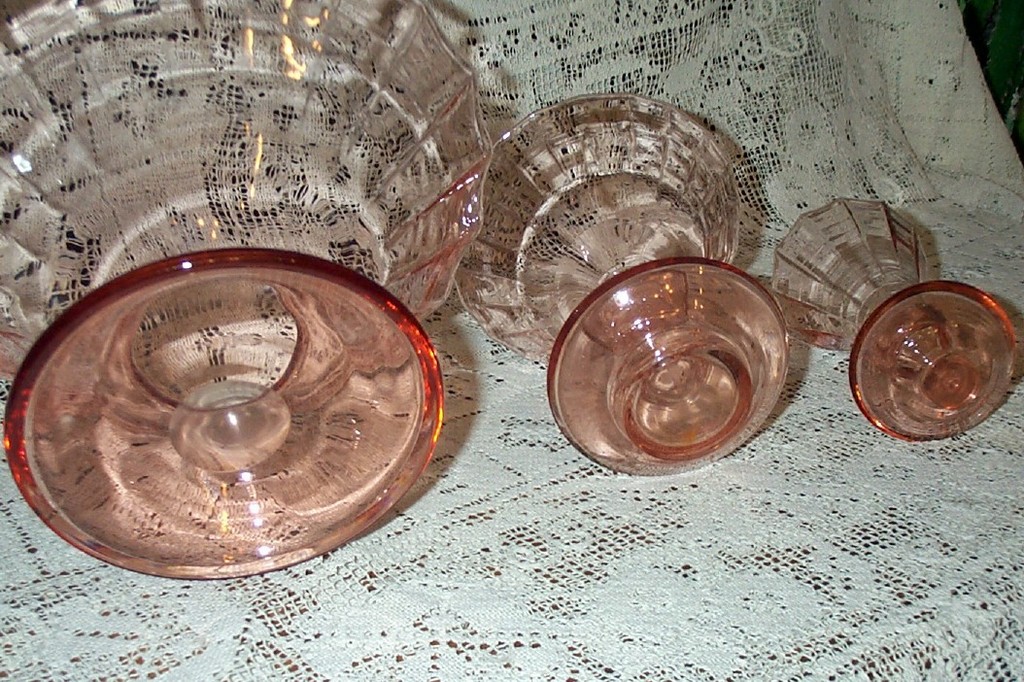 Hi Ralph! Don't know if I'm an "expert" per se, but I do love glass - aka my group "Glasshounds" - Feel free to join and share your lovely piece there to, if you'd like to.

I think it's a type of etagerie - for flowers or possibly a small fountain. It's really pretty! The cubed pattern on it is very similar to our "Tea Room" pattern of depression glass, but being of excellent quality and hand blown means your right - it's not likely to be made in USA.

My best guess would be Czech/Bohemia - possibly the same time period though of the 20's - 30's. It could also be French or English of course, but i've not seen this shape in any of the glass from those countries.

Etageries were very popular for floral arrangements in the mid to late Victorian era as well as having a resurgence of interest in the depression era right on through to the 1950's.

Thought it might be a type of etageria also but when you stack the piece like you see in the first photo, there is no place to add flowers or anything else. Each piece closes up the hole below it. I'll try to check out glasshound tomorrow. Thanks and maybe someone else has seen one of these things.

Great pix. Looking for input from the group on these great pieces of pink!

Permalink Reply by kathy park on February 19, 2013 at 2:44am
hi ralph i am no where anywhere near knowing glass but found these on the internet so far i cant find more ? i think the rose pink is the closest colour to yours  look at link below
thanks kath

That does look a lot like what these are meant to be. Bottom is 6 1/2 and the middle and top are both 7 inches but because they fit inside each other the total is only 13 1/2 inches. Now, I have to try to figure out a value on them. These have got to be worth more then the milk glass ones since these are hand blown. Any idea on a ball park Kathy?

hi i have heard on the forum that interest in depression glass is decreasing but cant find many of these items so hard to know value a pink stand is asking below 11" Pink Glass Inverted Thistle Pattern Cake Cup...

$59
or purple 3 tier stand see from kaboodle.com (apparently an ebay listing) use the description and see what you can find otheriwse i would take a price for a pink sunday bowl or similar x 3 maybe add on a bit more as they seem hard to find - sorry
cant help more

I must say that in my 45+ years of collecting glass that I have never seen this set before or anything else quite like it, but I think it is FAB!

It is certainly not English, and at 'guess' I would say that it's Sklo Union glass (Czech) and quite probably a 'Drinks Fountain' when assembled, for pouring in wine for example from top to bottom until full.

It may have also had at some point, 6 smaller 'shot' glasses and perhaps even a tray?

It is often worth checking and again, for any maker mark upon glass like this.

Marks can be often overlooked as they are usually placed so that they do not interfere with the design, and also set pieces can often be marked upon just one piece of a set. Hold each piece up in different sources of light and at all angles, you just may come up trumps!

Just to add, if I may, the pieces do not appear (from your photo's) to have been free blown or hand formed, moulded. The 'ground' marks that you mention upon the bases of each piece, would have been to ensure the stability of each piece and equal distribution of weight & axis once assembled.