I'm moving this from Whatdja Find to here becasue of the broader knowledge base.

I have a bit of a quandry. I snagged a really odd loaf pan at an auction last week. This pan is about 10" long by 4 inches wide and is pure depression glass. It has the words Miracle Maize embossed on each end. Here's the mystery. I had never seen one and before I sold it I wanted to know enough about it that I could sell it fairly. I called Little Crow Foods, who make Miracle Maize, and they said that they had seen the patent listing and the drawing for it but because of the Depression the pan was never made. Obviously it was made because I have one. Has anyone ever seen one of these? 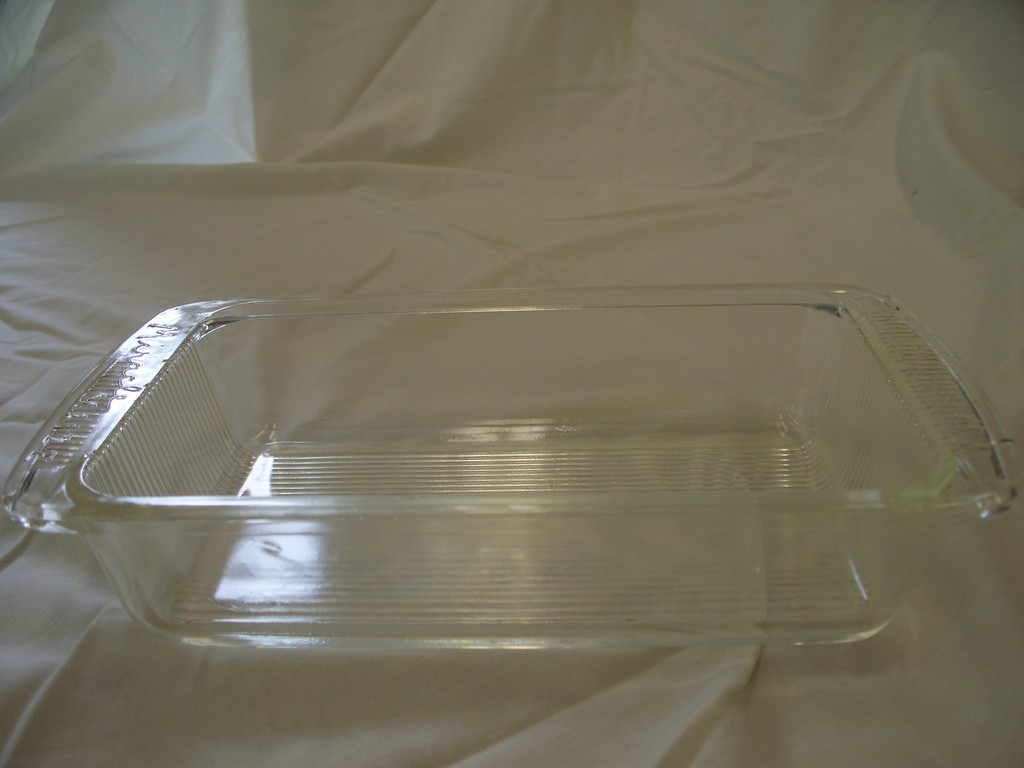 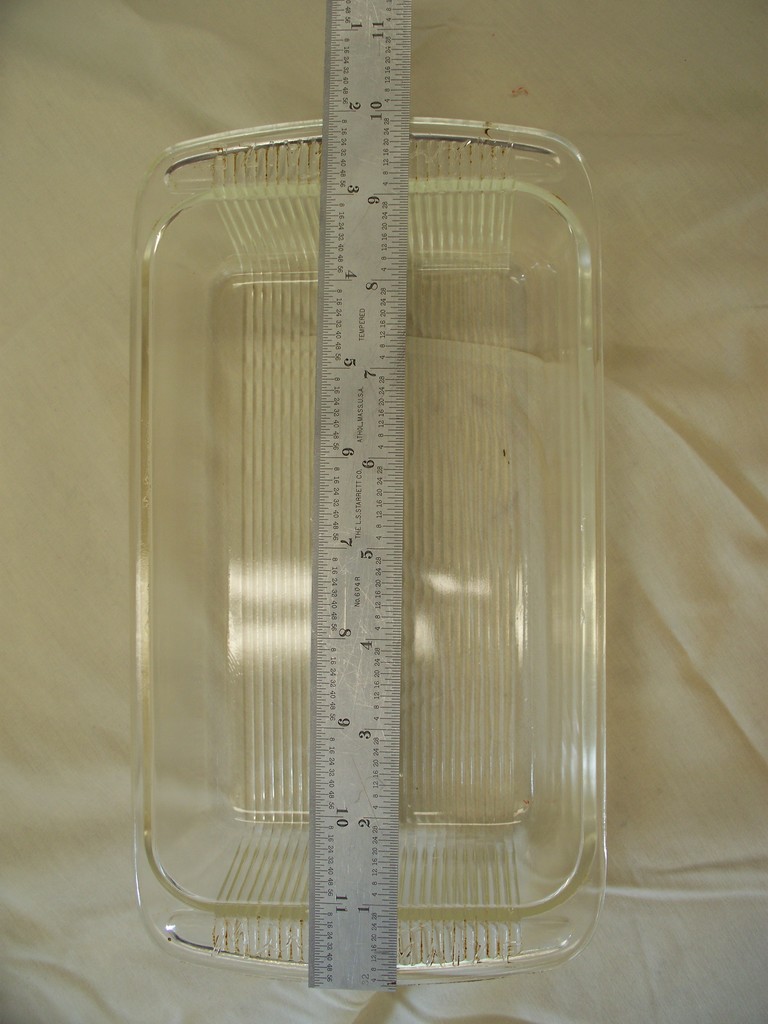 Permalink Reply by Amanda Wagner on September 15, 2011 at 5:52pm
I found this site because I was Googling one of these myself.  It came out of a box of misc glass items I won at an auction last Saturday.  This and your other post about it on this site were the only references I could find, everything else was for the corn bread pan.  Have you learned anything more about this pan?

I learned from Miracle Maize that this pan was never put into production.  The company has the patent print but said that due to the depression they were never made.  Apparently these were part of a prototype run prior to production that never happened.  They had never seen one until I sent pictures.  There are 3 in existence that I know of now.

You are in Elwood, Miracle Maize is in Warsaw and the other pan is in Illinois.  My guess is that they were made at the Indiana Glass plant in Dunkirk, IN and these were "borrowed" by employees.  I'd like to know their value.

My husband and I were wondering if it was part of a prototype run that made it out into the public, especially considering we both live in the heart of Indiana/Hoosier glass territory.  Amazing what you can find at the bottom of a $2 auction box.  Thanks!

There was a bit of delay between when I loaded your reply and when I typed mine.  You appear to have added that second paragraph during that time.  I knew I should have refreshed!

I am curious about their value, too.  Mine is not in great shape, both interior edges on the handles are lined with chips.  I was actually in the process of tagging it for a yard sale when I decided to research it a little, thought if I could put a date on it someone might be inclined to ignore the chips.  That person is now me!  It's not every day you get to own something that 'doesn't exist'. 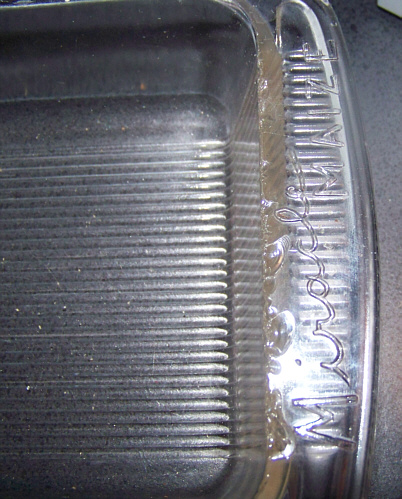 I have a bit more time to type now.  I was up against a time constraint before.  The gal at Little Crow Foods (Miracle Maize) was stunned to know that this existed.  Her word to me were, "You have something that we don't have."  She ahad seen the patenent print and it was dated 1932 so my guess is that Indiana Glass made a mould and poured just a few of these as samples but Miracle Maize didn't carry through with the project.  Then they probably went out the door in lunch buckets.   I'd love to know how many were made and how many survived.  BTW, Indiana Glass made the other type of bakeware.  The third pan I found on Etsy.com and a guy has it for sale for $10.  I seriously thought about buying it.  Too bad this is such a regional item.  For the record, I paid $1 for mine.

Hi, I was at an estate sell this past weekend. Sunday was half price day. I saw the dish and was thinking what a nice meat loaf dish. After looking I could tell it was old. I notice the word on the side Miracle Maize. Today I google it and found your notes. I saw where you research Miracle Maize and you found 3 other dishes. I live in Chickamauga Ga. That is outside Chattanooga Tn. I don't know how the person got the dish. I wonder if you found out anything else about these dishes. Thanks for any help. By the way I pay only 2 dollars for my dish

I just wanted to say after reading this thread of exciting exchanges about the mystery Miracle Maize pans, that I wanted to simply find out more about Little Crow Foods and their historical significance. I'll share this link Little Crow Foods with others like me who are not from the "heart of Indiana/Hoosier glass territory."

How fun to find these rare depression glass pans that only a handful of people probably enjoyed using. And someone really used yours, Amanda! :) Lots of cornbread cooked up in that dish!

Thanks for the responses ladies.  To date, I don't know any more about the dish than I knew in September.  I'm a bit curious how the pan got to Georgia.  My theory about these pieces being prototypes may be wrong.  To date I know know that there are at least 5 of these pieces.  If y'all hear any more about them please post your knowledge.

Thanks for posting about this dish! I also got this dish in a $2 lot of glass ware in an auction just yesterday. I knew I had not seen this dish and thought it looked interesting so I decided to research it. Your blog is the only place I could find the dish! So, now you know that another does exist! It was purchased in Brazil, Indiana. Thanks again for posting!

I found one of these today in Indiana.  Came home to search the internet and found your posting.  There is nothing else like your article on the internet.  Paid $1.99 for this Miracle Maize.

It is an interesting piece and though I didn't make my first million off it, I'm pleased to have it.  Unfortunately, I don't know any more about it today than I did the day I bought it. Sigh.

I found 1 of these in my parents house as we were clearing it out.  Maybe I should keep it?   They lived in Bargersville Indiana and I know that my grandfather worked at a glass company.