Purchased this beauty today at a Yard Sale. The sculpture and stand are 16 inches (40 cm) high and weigh 11.75 lbs. I think it is Soapstone. The base is also stone, probably dyed.
There are 6 Foo dogs carved into it, a large one at the bottom and 5 smaller ones above. There are 2 Balls, both are hollow and pierced. I have inserted a yellow Post-It inside so you can see that it is pierced. Likewise the vase part on top is also hollow and pierced.
Minor damage: In the photo you can see a hairline crack across the lower Foo Dog; it goes all the way through the stone, but appears NOT to have broken off, as there isn't any glue to be seen.
This sculpture I would guess probably held incense; there is a hole drilled vertically through the center. It may have been in a temple.

I hope somebody can identify it with a Dynasty and perhaps provide a valuation. I would be interested in selling it too. The piece is not signed or marked.

Permalink Reply by tomsantiquesetcetera on September 26, 2009 at 4:34pm 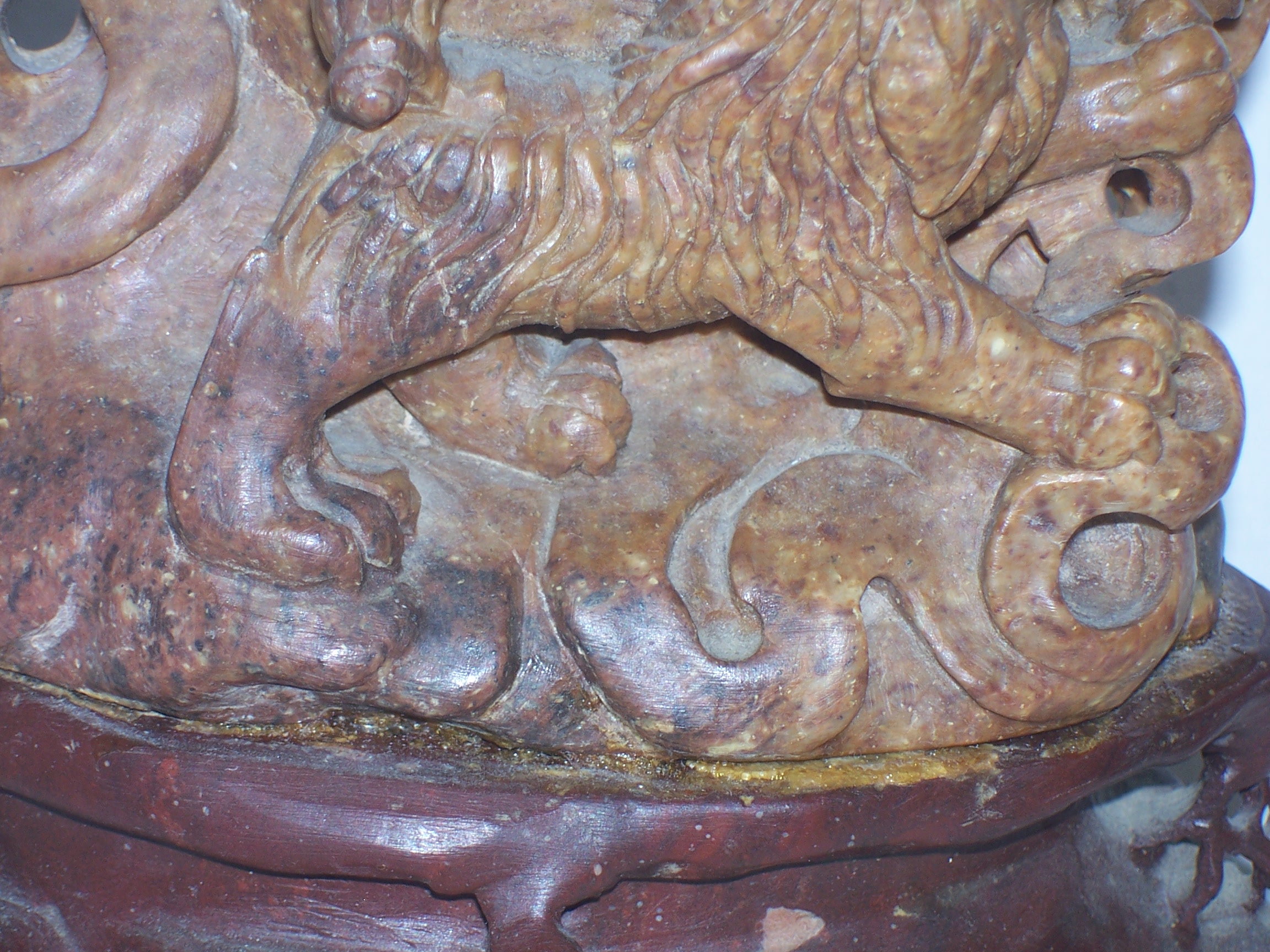 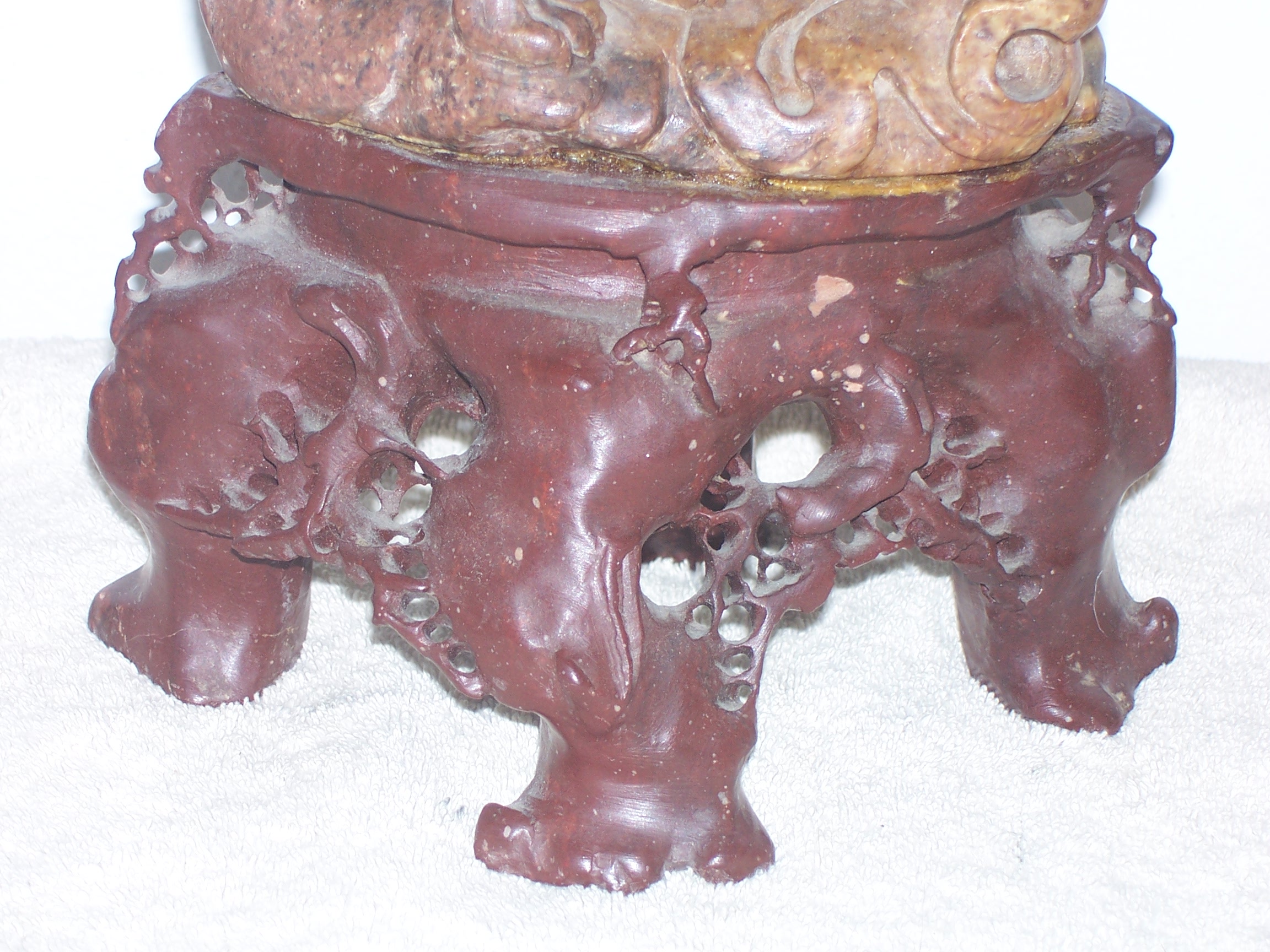 Permalink Reply by Paula on February 24, 2010 at 7:20pm
Hello Tom,
I came across this post and we have a very simular foo dog carving. It has the brown base and has two small balls and one large on top. There are 4 small dogs and one large dog. Ours is a light green with some rust color. If I had to bet they are made by the same maker. We were told by an antique dealer that it was made of Soapstone but another person who works with Soapstone said it was made of Jade. Did you ever find out what yours is made of and what it is worth? Ours was passed down to us. Any information would be appreciated. Thanks.

Permalink Reply by GrannyNan on August 20, 2010 at 1:30pm
Don't know why the pics disapeared if it is IAO or my PC or they been removed.

You got to know jade to know if it is jade. There imperial jade which is almost glass like and pure looking and degrees of that looking more impure. And a Nephrite Jade more stone~ish looking but has a certain look to it. Soap stone....well it looks like soap! only way I know to describe it. Both come in several shades of colors.

Tom,
I think your statue is a Zong or Kong called both here and there on the web. It is a stone with a hole down through the middle ,type object some times carved extravagantly sometime rather plain,used in the passing of a person. Buried with them to facilitate their travels to where ever. I like it. I have several pieces of jade. Know a little but not a whole lot. Still learning! LOL

The brown color scares me the one piece I have that is brown was dyed. Wrapped in tissue paper and sweated it will fade out of the stone onto the paper, if it is dyed. My one fake that I know of but I like the carving so it don't matter to me!

This is an old posting, but I am new here and it caught my eye.  Chinese antique sellers frequently call any stone jade, just like they will call any figurine in a turquoise color...turquoise stone.  Sometimes they just leave it at turquoise and let you decide!

I have purchased many items from China over the years and with time learned the ins and outs of terminology of Chinese antiques.  I have also bought plenty of things that were not what they were claimed until I started reading up on the subject and getting as many Christie's and Sotheby's cataloges as I could to train myself to recognize items as old or as more modern pieces.

I would say that your piece could be soapstone...it comes in many colors, but is a soft and easily workable stone.  Your item could be a harder stone.    I  think those are probably foo dogs.  I thought they might be Quilin, but they usually have some sort of horns.

I think you are right about this being a censor.  Just to hazard a quess I think it is 19th or 20 century piece.  I included a photo of a piece I bought that is soapstone that has had some color added to bring out details.  I think it is  20th century, but I'm not really certain.  Even if it is not terribly old Chinese pieces are going for higher prices as the Chinese are buying back their history.  Veronica

Permalink Reply by phil on February 24, 2011 at 1:20pm
This is soapstone & doesn`t appear to be from any dynastic period, probably someones souvenir & dating to the latter part of the 20thC. Contrary to popular opinion the animals are not dogs but Foo Lions.