In the mass of estate items the large auction house rejected as unworthy of their effort is this rather delicate artisan made necklace (the pendant for sure), with what I am fairly certain is corral and then a turquoise which feels too green for me to be sure.    I have Googled about and find a few other minerals like Amazonite which maybe .. maybe could be?  Simply looking for some opinion … will sell here soon simply based on its merits as a nice little piece with a delicate Sterling chain. 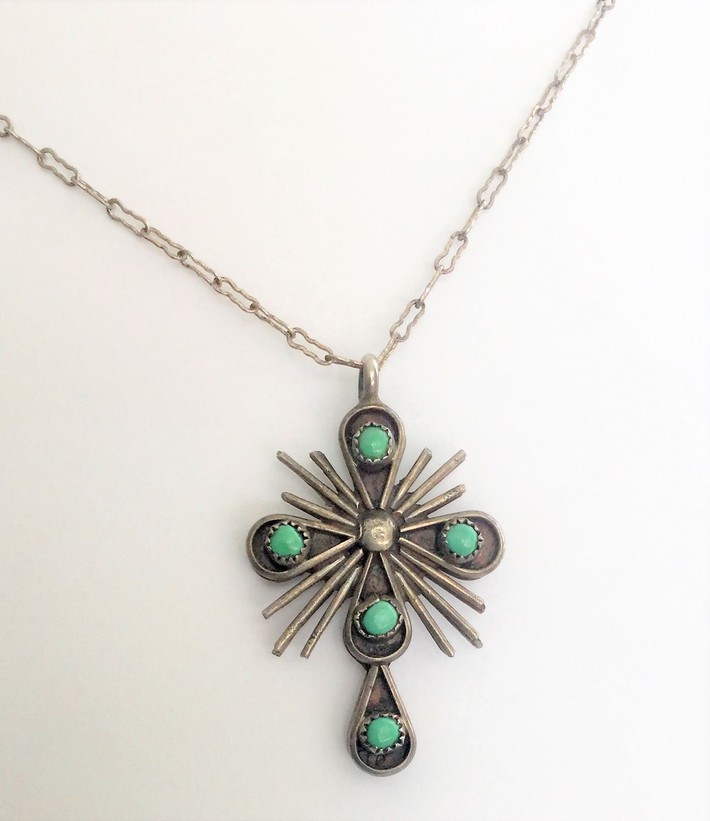 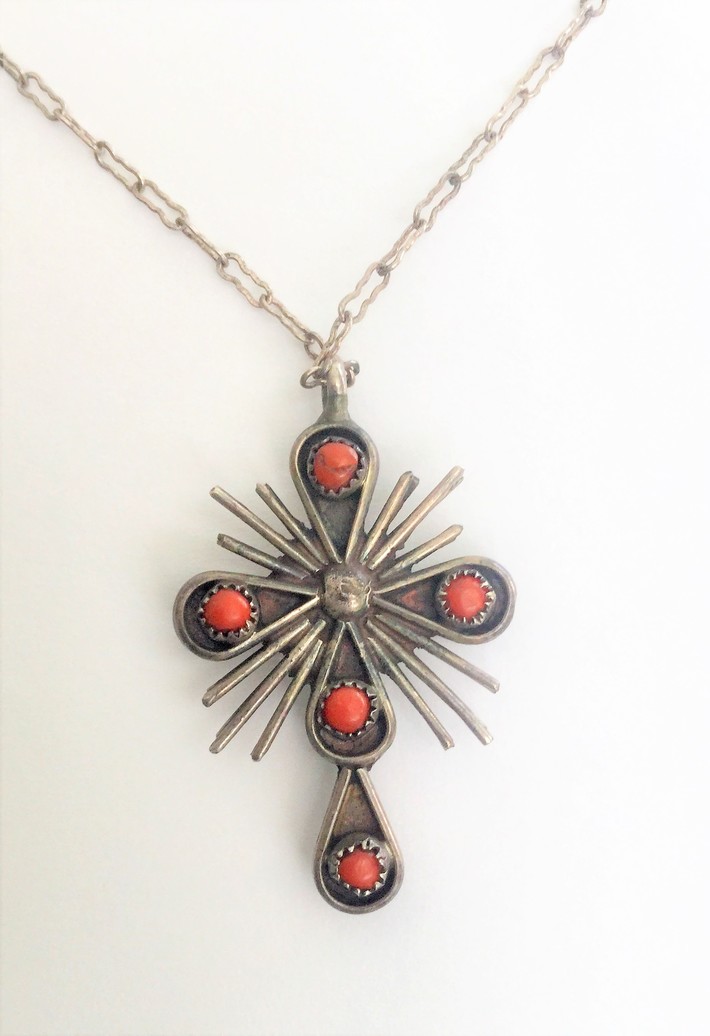 So It's one pendant, that is two sided? I doubt they rejected it because of "merits". They are just snobs that only wish to sell "Expensive" or "high end" stuff. I told you, I've been down this road many times, It can be exhausting, I know. UGH

Anyways - I think I know exactly what this is, and if I'm correct you will still get a very fair price online for it. It appears to be ca. 1930's Mexican Silver/Taxco. All of the old stuff, and lots of the still being made newer items have a large collector base - so no worries there!

I'm going to include a few links below. But first, tell me if you find ANY markings of any sort anywhere on the piece? Look carefully in and around the loop at the top, it may just be a small marking. What I'm looking for is a specific maker. If you have one, or can attribute this piece to one of the better artisans, you will get considerably more $ for it! So, it does matter. I'm pretty sure on the age, it could be a bit later - into the 1950's perhaps. Also, I'm pretty sure the stones are turquoise and coral - they may not be "top shelf" but that is likely what they are.  It's almost always called "Native American Style" jewelry - even though it's made in Mexico, and always has been - the lions share of these, anyways. And sometimes "Southwestern" Jewelry is the term used instead.

Ok, some links for you to Purus: Modern marks are usually started with "TC" Just go though all the Mexican marks/Taxco and other here to see all the older marks/and artisan markings: https://www.925-1000.com/mexican_marks.html

All of the silver jewelry that we sell is made by local Taxco artisans from silver –plata – that was mined in the Taxco de Alarcón region of México. This colonial city lies in the north of the state of Guerrero, about 100 miles southwest of Mexico City.

https://mexicansilverstore.com/taxco-guerrera.
Above will take you to the Modern listings and online store. Maybe helpful for pricing.

Vicki .. once again a huge thank you for such a thorough reply.   And let me say right off the bat, pretty certain there are no markings on the piece.  I have gone over it many times and do not detect any marks.

And yes, this is corral one side .. turquoise the other .. quite nice ..

I shall spend some time perusing the links .. thanks again .. Zeke 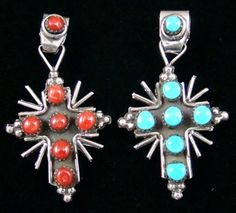 Well done as always Molly! It's entirely possible that this is Zuni, USA "Southwestern aka Native American"but, if we have no marking, and unless the artisan you found can verify? We can't rule out Taxco. and Both have decent collector base buyers, so maybe include both in a listing?

Vicki et al.    You may not wish to reply, but let me simply say as a long time eBay seller (and I can hear the groans!) I simply use it because it is easy and because I dont want to set up an Etsy store and on and on.   In general I have sort of assumed many of the online sale places monitor eBay and there is that chance they find my items.   Often I ship to this or that antique dealer etc.   See, I am not trying to get some RETAIL prices, I like to, if possible, let the market decide the selling price, and the auction is a good way to do it IF .. big IF … there are some interest buyers looking at my item.  Sometimes I win, sometimes I lose .. or in this instance the estate would lose .. but we have gone well beyond any reasonable due diligence anyway so I am not too concerned about that.   Please just mention sale sites or methods other than eBay for me to check out .. or not .. thanks .. Zeke

I will have to retest mine .. I do not recall confirming it was 925 or Sterling.   I could give it thumbs up for at least 800.   No marks and with my limited testing capability I would never list it as STERLING!