In 1934 William F. Paradise was awarded patent number 1,956,875 for his Mumble Peg Toy.  Within his patent description it explains:

This invention relates to a mumble peg toy, etc.
The object of my invention is the provision of a simple and efficient device for playing the game of mumble peg, or for use as a household tool, such as a nut-pick or an ice-pick.

Another object of my invention is the construction of a toy for playing mumble peg, which, when not in use, can be folded, so as to not injure the pocket or the individual carrying the same, but when it is desired to play the game, the device can be quickly adjusted for action.

The patent description doesn’t mention the addition of a corkscrew to the Mumble Peg Toy.  However, fortunately for corkscrew collectors, Paradise included a Williamson bottle opener/corkscrew! 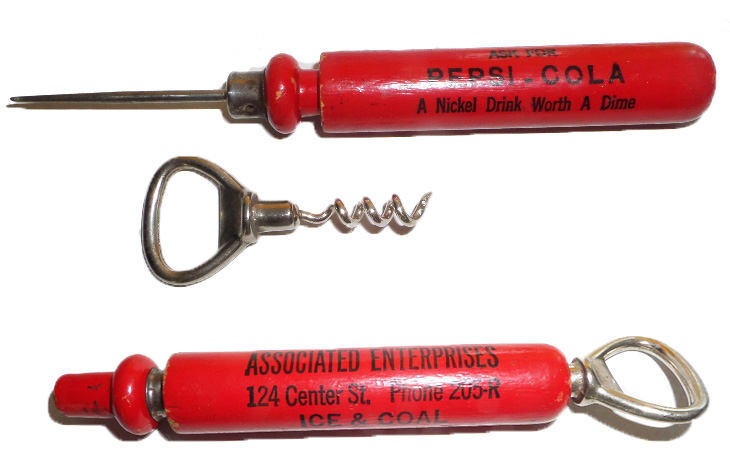 The fact that Paradise also mentions the use as an ice pick does bear mentioning, not only does it like one, and surely could be used for that purpose, but William F. Paradise was involved in the ice industry.  According the 1920 publication Clay County History by W.H. Woodson, “William F. Paradise [is] a progressive man of Liberty, is proprietor of the Liberty Ice and Cold Storage plant, one of the important institutions of the city.

Given Paradise’s involvement in the ice industry, his other patents make a great deal of sense.  In 1931 patent he was awarded patent number 1,822,170 for “Process of Making Freezing, and Hardening Ice Cream and Apparatus Therefor.”

And, in 1936 he was awarded patent number 2,039,926 for his “Ice Pick,” which references the mumble peg toy, explaining, “This ice pick is an improvement upon the device disclosed in my prior United States Patent No. 1,956,875, issued May 1, 1934.”  Similar in design to the Mumble Peg Toy, with the removable ice pick, the pick fits into the handle for storage.