You look so familiar: Part 5 - Wings

Wings...from the subtle to the sublime, they make perfect ergonomic sense. They make perfect design sense too, because chairs in this style are considered some of the most lovely ever produced.

The previous installment of this series on the topic of shell chairs included a 1957 crossover piece by Hans Olsen that had small wing-style arms, but the design element appeared much earlier than that. Eero Saarinen and Charles Eames designed their Organic Chair in the late 1940s, and Eames capitalized on the design later with his DAX chair, which will be included in yet another category.
Harry Bertoia's svelte Bird Chair made subtle use of the feature, while Robin Day's spectacular Royal Festival Hall chair took modern seating to the brink of flight
Read More: 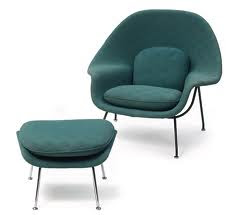