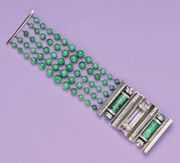 On Tuesday, March 15th, 2011 at 10:00 am, Skinner Inc. will conduct a sale of fine jewelry in its Boston gallery at 63 Park Plaza. The one day auction of over 700 lots will include antique, period and contemporary jewelry from famous makers such as Tiffany & Co, Cartier, Van Cleef & Arpels, Bulgari and David Webb.

Highlighting the auction is an important 7.16 carat pear-shaped diamond ring, mounted in platinum by Cartier, accompanied by a GIA report stating the diamond is D color and VVS1 clarity. The ring comes from a New Jersey collector and is estimated at $500,000 and $700,000.

Featured on the auction catalogue cover, an Art Deco platinum, jade and diamond bracelet by Seaman Schepps has been valued between $15,000 and $25,000. The five-strand jade bead bracelet is highlighted by diamonds totaling 4.25 carats, fluted rock crystal, and onyx.

A collection of antique and period jewelry comes from a New Hampshire estate and includes a large antique aquamarine and diamond cross pendant set in gold by the French maker Mellerio Dits Meller, a name rarely seen at auction, with an estimate of $5,000 to $7,000. From the same collection is a silver-gilt and enamel box made by Feodor Ruckert, a Russian craftsman who produced work for Faberge, valued at $15,000 and $20,000, and a gold and jadeite necklace made by Tiffany & Co., circa 1930’s valued at $2,500 and $3,500.

Jadeite is currently very sought after as well as precious colored gemstones of fine quality in large sizes. The auction will include a double-strand jadeite bead necklace estimated at  $15,000 to $20,000; and a platinum and ruby ring, set with emerald-cut ruby weighing 11.06, valued at $35,000 to $45,000.

The auction will include more than twenty lots of cufflinks from a Massachusetts estate, by famous makers Cartier, Van Cleef & Arpels and Tiffany & Co. Estimated value of the cufflink lots range between $300 and $1,200.