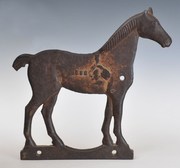 Fairfield Auction will sell the contents of several local estates Sunday, January 19th including a

their aunt, relegating most to the garbage bin, when they came across the oil on board of a beach scene and summoned

Fairfield Auction to evaluate the painting. It was quickly determined to be a work of the Edward Henry Potthast, probably

the best know painter of beach scenes in American art. The painting was given an auction estimate of $80,000/$120,000

and sent to the Monroe, Connecticut auction gallery for sale. It will also be included in Mary Ran's forthcoming catalog

A strong collection of modern prints and photographs from a local artist's estate include works by Sam Francis, Joan Miro,

Henry Moore, and Robert Motherwell. Of particular interest is George Rouault's Old Courtesan from 1937 and a collection

Several large bronzes will be sold including the iconic Pan of Rohallion by Frederick MacMonnies. The thirty inch figure,

cast by Jaboeuf Rouard of Paris, is estimated at $4,000/6,000. Other bronzes by Antonin Mercie, Charles Marceaux,

Emmanuel Villanis will also be sold.

Two heretofore unknown photographs by Margaret Bourke-White will be included in the sale. They include an interior

view of the artist's bedroom and a detail of her dressing table with a constellation design. They were produced by the

artist for an biographical article that was apparently never published, but are nonetheless well documented and include

notes in the artist's hand verso.

A strong grouping of books and ephemera includes a signed limited first edition of Roll, Jordon, Roll by Julia Peterkin and

Doris Ulman. The book focuses on the lives of former slaves and their descendents on a plantation in the Gullah coastal

Disney, a first edition of Mark Twain's Huckleberry Finn and a small collection of Beatrix Potter books, two signed by the

author will also be sold. Of special interest is a period album with over 250 unused patriotic Civil War envelopes.

A small selection of Americana includes an estate found Federal tall clock decorated by Rufus Cole in untouched attic-
found condition. With typical grain painted and stenciled decoration the clock is signed in pencil on the inside throat door

by Abraham Cole and dated 1832. An early and vibrant painted game board and two good mill weights will also be sold.

A group of Native American art features an early Plains pipe bag with quill and beaded decoration, a polychromed kachina

Over thirty lamps by Handel, Pairpoint and Tiffany. Leading the group is a Handel reverse painted scenic with palms in

a jungle along with an array of Pairpoint puffy lamps. Dozens of Handel and Pairpoint bases will also be sold.